Palm Oil in the Media: The Growth of the Sustainability Narrative 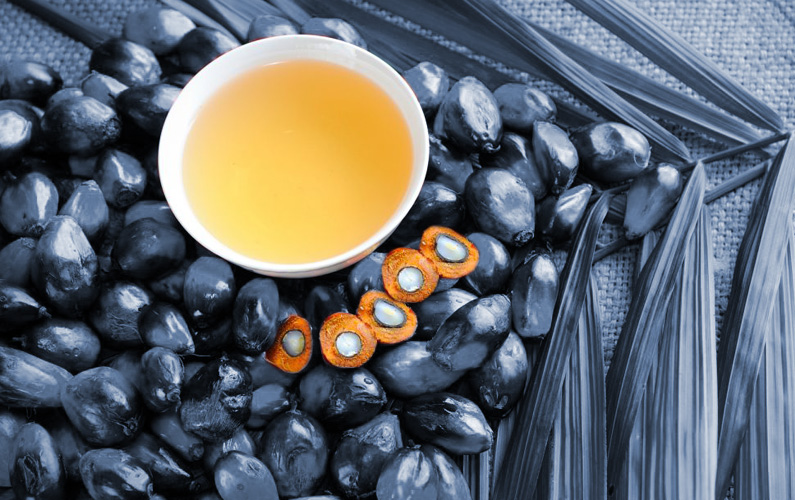 Palm oil, found in supermarket products ranging from margarine and cereals to soaps and cosmetics, has had a long reputation as a beneficial ingredient suitable for a number of applications in the food and beauty sectors. It’s also increasingly used as a first-generation biofuel, replacing petroleum-based products as an effective alternative for fossil fuels in the transportation and energy industries and as a substitute to mineral oil in power stations for energy production.

But the growing palm oil industry and the accompanying expansion in plantation areas have recently come under close scrutiny from green activists and consumers, who criticised it for being a driver of deforestation as well as displacement and disruption of human and animal populations, most notably of already endangered species like the orangutan, pygmy elephant and Sumatran rhino.

Additional criticisms include exploitation of workers and emissions of greenhouse gases into the atmosphere, a major contributor to climate change. As a result, the palm oil trade has been vilified by environmentalists and often presented as part of the big conversation around climate change and global warming – topics which become powerful coverage drivers not only in ecological and scientific discussions but also in political, economic and cultural analyses.

Scientists and liberal politicians are increasingly using the language of risk to convey their messages about climate change and to shift the debate towards the need for timely action. This has been reflected in the liberal-minded media: for instance, the Guardian announced that it would start using “climate emergency”, “climate crisis” or “climate breakdown” instead of “climate change” to reflect the seriousness of the situation.

For more on this topic, read our analysis “Big Oil and Sustainable Energy: Sowing the Seeds of Green Reputation”.

The palm oil industry’s reputational challenges have been especially acute in Europe, the world’s second-largest palm oil importer after India, where buyers are avoiding the oil because of environmental concerns. Earlier this year, the EU passed an act to phase out palm oil from renewable fuel by 2030 but is set to miss a 2020 target backed by about 10 countries, as well as by big companies like Nestle, Mondelez, PepsiCo and Unilever, to use 100% sustainable supplies of the edible oil in food ingredients.

The failure to meet that target has been attributed to a lack of public awareness and debate around the palm oil industry, particularly in Italy, Spain and Poland, which has resulted in a lack of consumer pressure on food businesses to source sustainably. Meanwhile, “sustainable finance“ has become more and more commonplace in the commodities industry, producers and traders trying to boost their reputations by taking on “sustainability loans.”

A recent Reuters investigation revealed that Malaysia, which together with Indonesia produces about 85% of the world’s palm oil, has engaged in a massive PR effort to enhance the reputation of its key product, especially in Europe. The main objective of the PR strategy is to stop environmental activists and Western governments from tarnish palm oil to the extent that it ends up a pariah product, like tobacco.

Mainstream consumer backlash for palm oil appeared to grow late last when UK retailer Iceland released an advertising campaign​​ centred around the orangutan extinction caused by palm oil production practices. The “Rang-Tan” advert was originally made for Greenpeace, of which Iceland’s director is a member.

The ad’s impact made Iceland the most often mentioned company in the media conversation from October 2018 to August 2019 in the top-tier English-language outlets:

The low-budget animated video also announced Iceland’s pledge to eliminate all palm oil from its own-brand products. Unable to meet its deadline, the company dropped its own brand from 17 foods, saying it did not want to “mislead consumers”.

The commercial was judged to be the most effective in 2018 but was never actually aired on TV. Clearcast, the UK non-governmental organisation which pre-approves ads, refused to approve it because it had previously appeared on the website of Greenpeace, which had some characteristics of a political organisation. As a result, Iceland tried to distance itself and the ad from Greenpeace.

But the commercial was released online and went viral, in part because of its “the ad they tried to ban” image. There was even a petition signed by more than a million consumers demanding Clearcast to reconsider its decision.

The campaign received a great deal of media coverage, with publications noting that the palm oil initiative was just another example of Iceland‘s environmental efforts, which also included recycling freezers containing ozone-depleting chemicals and removing artificial colourings and preservatives from foods. Perhaps most controversially, Iceland was the first UK supermarket to ban genetically modified (GM) ingredients.

For more on GMO, read our analysis “GMOs in the Media: The Genetics of a Spicy Debate”.

These moves were initiated by the retailer’s founder and executive chairman, Sir Malcolm Walker, according to whom the environmentally-focused messaging has helped the brand stand out in the market by positioning itself as an “ethical retailer“, while its high profile in the media brought in new customers.

And although Iceland’s palm oil consumption for own-brand products pales in comparison with what consumer goods giants like Unilever get through, the campaign managed to fulfil its main purpose – to stir up a more lively conversation around the palm oil industry. Which also meant attracting a great deal of criticism – for instance, many pointed out that alternative oils such as sunflower or rapeseed require far more land to produce the same volume.

Other critics noted that the ad is moving the discussion in the wrong direction – instead of bashing palm oil as a whole, it should have concentrated on unsustainable palm oil. The head of the European operations at the Roundtable on Sustainable Palm Oil (RSPO), Inke van der Sluijs, called Iceland’s move “a very unfortunate marketing campaign” which has been damaging for the RSPO and its members who have a clear focus on sustainability.

The problem is that if the main narrative around palm oil is that it should be removed from products altogether, then consumers would be adamant to listen to messages about the benefits of sustainable palm oil. Van der Sluijs also said that the ‘replacing’ or ‘phasing out’ strategy would mean moving the problems to other regions, communities and biodiverse areas instead of looking for sustainable solutions.

RSPO aims to solve the sustainability problem by issuing certifications which prove that palm oil producers adhere to a set of environmental and social standards.

By offering RSPO-certified palm oil, companies strive to communicate to investors and clients that they’re taking the issue seriously, which helps alleviate the reputational pressure associated with the industry’s environmental footprint. According to Nestlé, a long-standing member of the RSPO, restoring palm oil’s reputation goes beyond certification and should include educating consumers on the entire sustainable sourcing story.

The discussion initiated by Iceland has put other companies in the limelight. For instance, Wilmar, the world’s largest processor of palm oil, which is responsible for around 40% of the world’s supply, was mentioned for signing up to a sustainability loan, the first of its kind in the palm oil sector.

Wilmar also communicated its willingness to provide sustainable solutions by sharing plans to use satellite monitoring to prevent further destruction of rainforests in order to implement its new “no deforestation, no peat, no exploitation” (NDPE) policy. With this initiative, Wilmar is backing sustainability consultancy Aidenvironment to draw up a comprehensive mapping database of suppliers in countries such as Indonesia and Malaysia so as to suspend those involved in deforestation.

Other major palm oil users, including Nestlé, Unilever and Mondelez, were reported for also trying out the new satellite technology in a rush to meet the pledge of zero net deforestation by 2020. This practice has been criticised, with some arguing that boycotting unsustainably made palm oil just drives bad practices elsewhere. John Hartmann, global sustainability head for agricultural supply chains at Cargill, which sells palm oil to Nestlé and Unilever, said that “dividing the supply chain into the good versus the bad fundamentally does not solve deforestation”.

Mondelez, the maker of Toblerone, Cadbury and Milka, has had intense reputational struggles since Greenpeace linked it to the destruction of orangutan habitats in Indonesia last year and said that its palm oil suppliers have been accused of child labour, exploitation of workers, illegal deforestation, forest fires and land grabbing. The company responded by saying it banned problematic suppliers and that it will improve product traceability, act against worker exploitation.

One of Mondelez‘s suppliers, Malaysian company FGV Holdings, which employs around 20,000 migrants on more than 800,000 acres, became subject of many news stories after facing legal petitions from two groups that want customs officials to block the company’s palm oil from entering the United States over allegations that it subjects migrant workers to forced labour and “slave-like” conditions. Apart from Mondelez, the FGV clients included Mars, Nestle, Hershey, Pepsi and Procter & Gamble.

By navigating the palm oil conversation towards sustainable solutions, companies like Wilmar, Mondelez and Nestlé enter a territory currently occupied by producers of meat and dairy alternatives, which aim to distinguish themselves by highlighting their sourcing practices and branding themselves as “green”, “eco”, “responsible” and so on. They aim to reach an environmentally-conscious audience through a clear idea about the values that define a certain brand – these consumers are not simply buying products, they are making lifestyle statements.

The conversation around sustainability within the food industry is set to become livelier and livelier, especially among younger generations whose members tend to share their views on social media. The fact that ethics and the environment are some of the most widely discussed topics in the coverage we analysed goes to show that consumers are making well thought out choices, taking into account issues beyond their own health.

The best way to reach such an audience is through a clear idea about the values that define a brand – these consumers are not simply buying products, they are defending certain values with their choices. Shoppers want to know why brands use the ingredients they do and what motivates the messages they send through their marketing strategies.

This level of consumer consciousness underlines the importance of leveraging social media, where many buyers provide feedback and recommend products.

Do you want to learn more about how we use advanced media analytics to turn media data into strategic insights?

Download the 5-page report by Commetric and learn how Media Analytics can be used to generate insights about the palm oil debate in traditional and social media.

The palm oil debate in the media: from data to insights