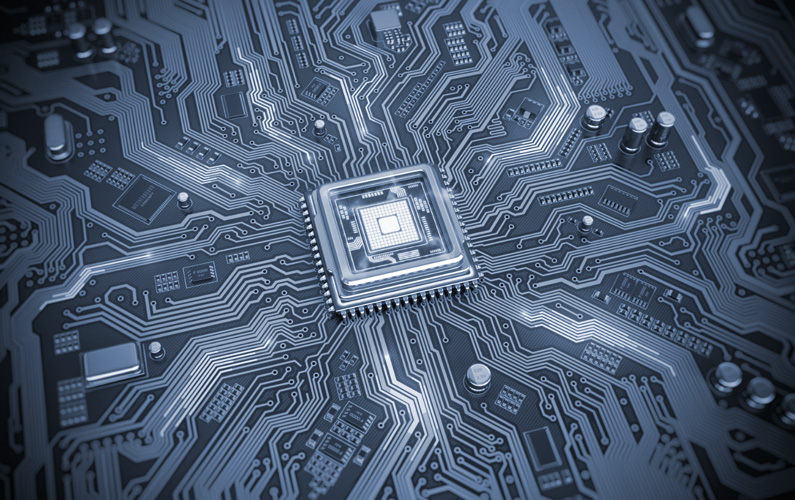 In September, the Financial Times broke the news that Google claimed to have built the first quantum computer that can carry out calculations beyond the ability of today’s most powerful supercomputers – a landmark called ‘quantum supremacy’. The company’s paper was briefly leaked on a Nasa website before being removed, and a month later the tech giant officially announced that it’s achieved quantum supremacy in the scientific journal Nature.

But even the briefly leaked paper was enough to immediately generate a buzz and to make the global mainstream media talk about quantum computing breakthroughs. Numerous commentators pointed out that Google‘s achievement offers a glimpse into a future in which even the most advanced of today’s computing systems would appear primitive.

Most of the reports presented the emerging field of quantum computing as a real game-changer poised to upend entire industries from telecommunications to finance and healthcare, conferring big economic advantages. For example, it has been widely suggested that quantum computers could quickly and accurately predict stock market swings, improve drug development and give birth to the fastest ever communications systems.

As with any promising development like 5G or the Internet of Things, the flurry of stories about quantum computers painted a colourful futuristic picture and navigated the narrative towards the near-magical capabilities of the new technology. In this case, the word “quantum”, which imbues any topic with instant mystique and gives it a science fiction flavour, guaranteed the public’s excitement, swiftly becoming one of the many tech-related buzz words with fuzzy meanings which are thrown around by journalists and pundits in every context imaginable.

However, there were also more down-to-earth voices in the conversation which reminded us that today’s machines are, at best, years away from any practical use, while others even raised the question whether the new advancements could be just head-turning piece of research with little practical application.

Many within the computer science community expressed worries that the buzz could turn into a bubble, especially since some software companies are already marketing their work on quantum algorithms, which are written for hardware that does not yet exist. Another part of that commentariat also warned that there is a need for careful forethought for ethical considerations, as with every case of disruptive technology.

Analysing the media conversation around quantum computing from October 2018 to November 2019, we weren’t surprised to find that Google dominated the discussion since its quantum supremacy announcement served as a powerful coverage driver from September onwards.

Google’s researchers presented their achievement as a “milestone” which “heralds the advent of a much-anticipated computing paradigm”. The demonstration of quantum supremacy was perceived as a testament that the company is on its way to execute tasks far beyond today’s computers, such as modelling protein folding or designing new materials.

But a large portion of the quantum debate in the media was whether Google indeed achieved supremacy, with IBM, one of the main players in the quantum race, dismissing the claim that this is a seminal moment for computing as “grandiosity”.

Dario Gil, head of research at IBM, told the Financial Times that the research is just “a laboratory experiment designed to essentially — and almost certainly exclusively — implement one very specific quantum sampling procedure with no practical applications”.

But despite IBM’s criticisms, many in the research community welcomed the supremacy news, with scientists quoted by The New York Times comparing Google’s breakthrough to the first plane flight. Even one of Gil’s former colleagues, ex-IBM executive Chad Rigetti, who now heads a quantum computing start-up, labelled the research as “profound” and “a big moment for humans and for science”.

Many media outlets like The Guardian and Quanta Magazine focused their quantum commentary on the debate between Google and Dario Gil. This discussion also resulted in many articles questioning Google’s claims, with headlines such as “Google has cracked ‘Quantum Supremacy’ or have they?“, “The quantum supremacy enigma: Can Google’s claim withstand scrutiny?” and “Has Google Actually Achieved ‘Quantum Supremacy’ With Its New Quantum Computer?“.

Part of this debate stemmed from the very term “quantum supremacy”, which was coined by theoretical physicist John Preskill quite recently – in 2012. Gil highlighted that the Google‘s system is a specialised piece of hardware built to handle a single problem, and this couldn’t really be described as “supremacy”. He contrasted it with IBM‘s work, which concentrates not on achieving supremacy but on demonstrating “quantum advantage” by developing the first applications for the technology.

Meanwhile, Microsoft featured in the conversation for its aspiration to deliver benefits from quantum computing technology that today are mostly just a promise by working on a qubit technology called a topological qubit. After a talk at the IEEE International Conference on Rebooting Computing, Krysta Svore, general manager of Microsoft‘s quantum computing software work, said that the company is almost ready to put them to use.

Amazon also didn’t lag behind and entered the quantum race by announcing it will partner with three start-ups – D-Wave Systems, IonQ and Rigetti Computing – to offer online access to prototype quantum processors through a new service called Amazon Braket.

As ever, Amazon continues to be part of the news cycle for its continuous business diversification – last year alone, it invested billions in more than half a dozen business initiatives. Perhaps its most often discussed venture was its entry into the healthcare market – in June 2018, Amazon announced it was buying online pharmacy PillPack for $753 million.

The company is also often mentioned in relation to its partnership with JPMorgan Chase and Berkshire Hathaway, which aims to reduce healthcare costs for employees, its investment in cancer detection start-up Grail and its plans to transform its virtual assistant smart speaker Amazon Echo into a home healthcare tool.

For more in this topic, read our analysis “Big Pharma vs Big Tech: Healthcare Innovation Trends in the Media”.

Chinese tech corporations Baidu, Alibaba, Tencent and telecoms giant Huawei featured in the discussion for setting up labs for the development of quantum technologies. Many publications framed these developments as part of the epic struggle between the United States and China for control of big tech industry, which sees investors being caught in the crossfires.

A number of US commentators have voiced concerns that China is pulling ahead in the quantum race and will develop better solutions for industry and power, better spying and better computing by pouring billions into research and development. China’s ambitions have sparked calls for more R&D funding in the United States.

For members of the US government, “quantum supremacy” has a slightly different meaning – namely, beating China. Last year, Congress passed the National Quantum Initiative Act, a plan to spend $1.2 billion to boost research into quantum technology.

Soon after Google’s announcement was published in Nature, Michael Kratsios, Chief Technology Officer of the United States, wrote in an op-ed for Fortune: “In America, as with many of our likeminded international partners, we believe deeply that freedom coupled with a spirit of cooperation and strong public and private institutions produce incomparable innovations.”

As the two largest national economies embroil in a trade showdown, it is individual companies which are in the centre of extensive reportages and economic commentary: the dispute is not just between the two countries, but also between corporations and policy makers, as the former are usually opposed to protectionist approaches. In the accelerating tit-for-tat dynamic, communication professionals have to design strategies demonstrating to both stakeholders and consumers that their business has a firm grip on the situation.

The US is specifically aiming at China’s high-tech industry to create economic hurdles on the government’s “Made in China 2025” initiative, designed to boost the country’s manufacturing power.

For more on this topic, read our analysis “US-China Trade War: Corporate Communications in the Battlefields”.

Despite their smaller share of voice in comparison with well-established tech brands such as Google and Microsoft, a growing number of start-ups gradually makes its way into the conversation around quantum computing. Some of them get the media’s attention for raising hundreds of millions of dollars in private capital in a race to be first to market. The industry-tracking website Quantum Computing Report lists more than a hundred private start-ups that claim to be working on quantum technology, with some media outlets calling them straight out of sci-fi companies.

IonQ, Rigetti Computing and D-Wave were often mentioned in global daily outlets for their partnership with Amazon while featuring in more specialised publications for their own projects. For example, Maryland-based IonQ raised $55 million in a funding round that was led by venture funds backed by Samsung and the government of the United Arab Emirates. The start-up already has 4 quantum computers, which it rents out to academics and businesses.

California-based Rigetti Computing is also among a handful of companies with its own quantum computers. Chad Rigetti, founder and chief executive of Rigetti Computing, also commented on the international tech race by saying that “quantum is really an opportunity for America to kind of leap ahead on computing and chip technology after globalization has led to the migration of that expertise elsewhere.”

Canadian D-Wave Systems came under the media spotlight for tapping into a trendy topic by claiming that their quantum computers can help solve climate change. D-Wave CEO Vern Brownell said that “conventional computers are one of the largest energy usages in the world” and added: “So it’s important that we offset that by technologies like ours.”

Zapata Computing, which raised $21 million in a Series A round, was perceived as unique among quantum computing start-ups because it isn’t interested in building quantum computers but in building software applications for those systems. Q-CTRL also received media attention for software innovations: it is launching a world-first software product that is designed to sit over any hardware and uses “quantum control engineering” approaches.

The media frenzy around quantum computing boosted the tech industry’s image as the frontrunner of innovation at a time of growing concerns over issues such as data privacy and abuse of market power.

Consumers continue to hold the tech sector in high regard despite scandals tarnishing the reputation of some industry giants, according to a global market research study by leading brand valuation and strategy consultancy Brand Finance. The sector ranks joint-third out of the 10 sectors covered in Brand Finance’s research, with a score of 7.0 out of 10 globally, and 6.8 in the UK, higher than that for banking, telecoms, and utility brands.

Tech brands have remained resilient despite recent data privacy scandals. Facebook’s troubles, in particular, were what really made data privacy a central concern for consumers – it became clear that improper handling of sensitive information can lead not only to financial abuse but can also influence global politics and people’s health and well-being.

The risk associated with the way data is used versus the way it’s safeguarded is becoming a priority for an ever-larger group of stakeholders, not just regulators and policy makers. Our analysis found that this has made issues such as litigation and illegality the most sensitive reputation drivers for the tech industry. But in spite of this, higher scores for reputation drivers such as innovation and products placed tech way above other major industries such as finance or pharma.

For more technology insights, read our analysis “Trends in Telco PR: 5G in the Media”.