Consumer Boycotts: The 5 Most Controversial Brands in the Media Right Now 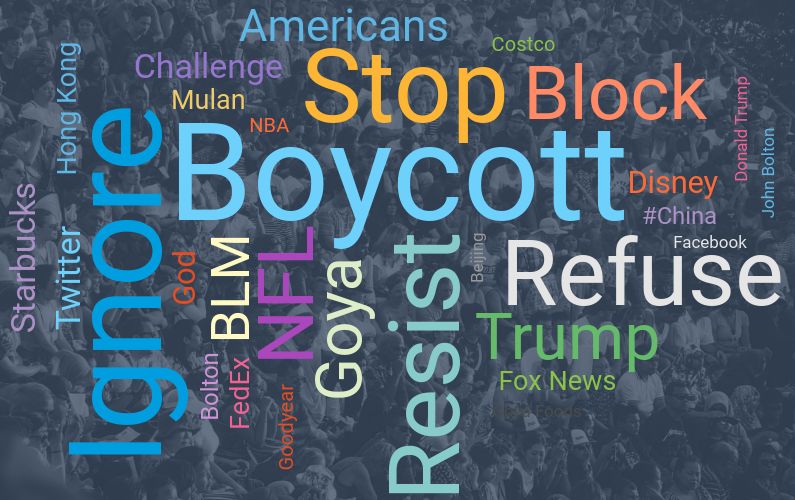 Reading the news, it seems a new consumer boycott is born every five seconds. So often we read about a company whose actions or statements are causing outrage that many are under the impression cancel culture has become an everyday part of corporate life. Research indicates that may not be far from the truth. A recent Lending Tree survey found that 38% of Americans are currently taking part in a boycott of at least one company, compared to only 26% last year. Half of these were Gen Z or Millennials.

Over the last 10-15 years, boycotts have exploded in popularity, and the anti-Trump #GrabYourWallet campaign alone put almost 50 companies with ties to the president in activists sites.

With some researchers calling consumer boycotts the most common form of political action in the United States aside from voting, we used our bespoke data analysis methods to research and compile the most prominent and active boycotts in the media right now.

With the most successful boycotts being those that generate the most media coverage, we analysed 1,812 articles in top-tier English-language outlets in the last year and identified the brands with the highest media resonance.

As we can see, Amazon comfortably leads in the media conversation around boycotts. This is not surprising given the multitude of directions from which it can draw outrage.

In the West it is frequently the target of protests over its poor treatment of factory workers, especially when compared to the colossal wealth of founder Jeff Bezos.

In China, Amazon created a strong backlash for selling t-shirts with slogans such as ‘Free Hong Kong’ and ‘Hong Kong is Not China’. The hashtag ‘Amazon T-shirts’ was one of the top trending topics on Weibo (Chinese Twitter-style platform) and faced accusations of cultural insensitivity in the country.

The controversy spread to the US media and prompted Amazon to release a public statement saying “Amazon has always and will continue to acknowledge the longstanding and widely-recognized policy of ‘one China, two systems.”

In the meantime, Chinese consumers have latched onto a growing ‘Boycott Apple’ movement as an answer to the Huawei ban in the US. Apple may have suffered some damage to its brand in the region, with CEO Tim Cook writing in a letter to investors in January that the company did not foresee the magnitude of the economic deceleration, adding that much of the company’s revenue shortfall was due to lower sales in China.

One of the most recent boycott stories was about Goya Foods, the largest Hispanic-owned food company in the US, which sells products from the Caribbean, Mexico, Spain, Central and South America.

The calls for a boycott came after the company’s CEO Robert Unanue praised US President Donald Trump at an event at the White House, saying his leadership was a “blessing”, as Trump signed the Hispanic Prosperity Initiative.

Since the calls for boycott, Trump and his daughter Ivanka have expressed support for the company on social media. President Trump tweeted: “@GoyaFoods is doing GREAT. The Radical Left smear machine backfired, people are buying like crazy!”

All three of these Japanese companies have fallen foul of worsening cultural and diplomatic links between South Korea and Japan in recent years. A South Korean court ruled that several Japanese companies owed compensation to Koreans who were forced to work for them during World War Two. The resulting Japanese export controls and South Korean outrage has led to boycotts of flagship Japanese brands such as Honda, Toyota, and Asahi.

With historic cultural tensions and neither side backing down, Honda and Toyota have both braced themselves for further losses in the region.

What does this mean?

These top five highlight the myriad of factors that can lead to boycotts, some of which are often out of the targeted companies’ control. With boycotts becoming more popular, global, and unpredictable, it is imperative for both in-house and client-focused communications professionals to be constantly vigilant and aware of the social media landscape around them. Reliable and lightning-fast data analysis allows you to stay ahead of the conversation when it comes to fraught issues such as those above.

Learn more about how Commetric’s Media Monitoring can help you create the crisis preparedness necessary to protect your brand’s reputation.