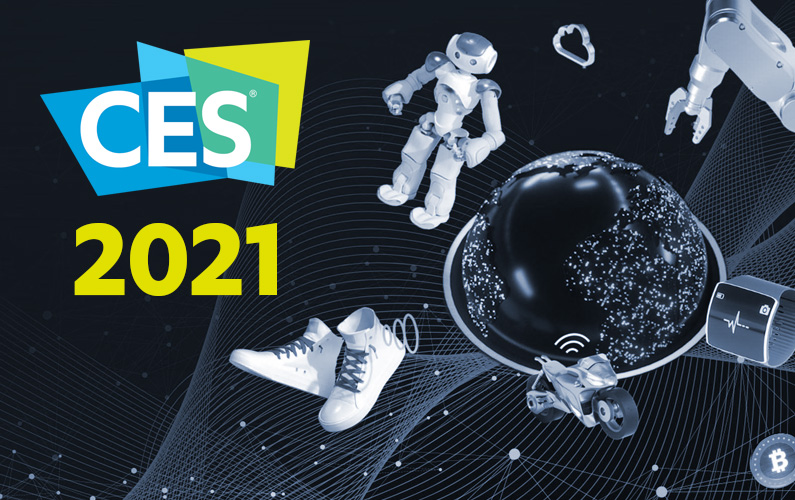 Of course, the Consumer Electronics Show (CES) was all-digital this year. In fact, this instalment of the biggest marketing bonanza for communications professionals in the technology industry made history as the largest ever digital tech event.

Traditionally, tech companies and entrepreneurs show up at the show in Vegas with new ideas of how gadgets can solve our everyday problems. According to some commentators, the most impressive tech innovations at this year’s edition, just like last year, were more about making the world better than simply impressing the crowds. Other popular opinions circulating the media stated that tech got less techie and more subtle while seeming more focused on the present than on some utopia.

Naturally, the biggest difference this year was that everyone seems to have focused on the same problem. Many brands presented Covid-related tech solutions, such as connected masks, germ-killing UV gadgets, smart air-purifiers and temperature-taking video doorbells.

Even though the shift to a virtual event meant much of the buzz was lost, the show still proved to be a media spectacle, as every major outlet was quick to report on the most innovative technologies.

We analysed 471 CES articles published from 1-22 January in the top-tier English-language publications and found the most often mentioned brands:

Like last year, the discussion around the event was dominated by Asian tech heavyweights like Samsung, LG, Panasonic and Sony, which presented innovations in 5G, artificial intelligence, electric vehicles and other areas.

Even though the pandemic slowed deployment of 5G networks, 5G was still one of the biggest buzzwords at the event as Samsung revealed 5G-capable smartphones. LG featured in the media for its Covid tech: the PuriCare Wearable Air Purifier, which has a respiratory sensor, built-in fans, a HEPA filter and an air-purification system.

Journalists noted that although Samsung built on last year’s proclamation that the next era of tech will involve technology that’s more personalised and intelligent (something its co-CEO H.S. Kim dubbed the “Age of Experience.”), the company’s message was more subtle this year as it focused on technology to make our lives easier during the pandemic and beyond — and it’s working on new initiatives that improve conditions even more.

Samsung also showcased three new robots, including a robot vacuum that moonlights as a home monitoring device and a domestic robot that can pick up clothes from the floor, load the dishwasher and even pour a glass of wine and bring it to you. The company also made a move into the fitness tech space with a linked fitness app.

Some Silicon Valley giants like Apple, Google, Amazon and Facebook were not on the exhibitor list, but their no-shows were not commented upon frequently. However, Amazon and Google had such prominence in the media conversation because of all the new smart devices and audio interactive creations featuring Alexa and Google Assistant.

Both assistants were mentioned many times, be it in the new smart home devices by Samsung and Cync, formerly C by GE, new wearables like the wireless earbuds from JBL, or the Aromeo Sense, a bedside device that uses lights, music, and special scents to help calm users and let them sleep better. In addition, LG’s new voice-enabled refrigerator could be run only by Alexa, while Google Assistant is the sole voice AI for D-Link’s new smart home water sensor kit and the upcoming smart TVs by Sony and TCL.

But Amazon and Google’s biggest cloud computing rival, Microsoft, had a big promotional boost over its competitors as it was chosen to power this year’s CES and create a virtual showcase for its exhibitors.

Many reports remarked that a lot of big Chinese firms that have been part of CES in the recent past were now missing: the drone-maker DJI, the smartphone-makers Huawei and ZTE, car start-up Byton, and tech giants Tencent and Alibaba.

Chinese telecom giant Huawei, for instance, which had a sizable exhibit last year, was mentioned as analysts were keen to know if chip-makers like Intel, AMD and Qualcomm would include Huawei and China in their outlooks. A major Chinese player that did make an appearance was TCL, which introduced its latest smart home devices and new smartphone.

General Motors also used the show to announce a new logo and the company’s vision to produce all-electrical vehicles and flying cars, which made shares of the company jump to an all-time high.

The most often quoted corporate spokesperson in the CES media debate was Hans Vestberg, CEO at Verizon:

Vestberg was the first keynote speaker at CES 2021, thus taking probably the most prestigious speaking engagement in the tech world. His talk centred around next-generation wireless technology, calling 5G “an innovation platform that makes other innovation possible.” Vestberg compared and contrasted his last CES speech in 2019 where he laid out the foundations of 5G, and said that in 2021, due to the acceleration of digital transformation triggered by the pandemic, those innovations arrived sooner than even he expected.

Meanwhile, Gary Shapiro, president and CEO of the Consumer Technology Association which organises the CES, said that the show demonstrated how the pandemic accelerated the arc of innovation and illustrated the resilience and innovative spirit of the tech industry. “Technology will move us forward and CES 2021 will illustrate how innovation paves the way for a brighter tomorrow.”

Last year, his session with Ivanka Trump drew many headlines – not least because he had once penned a blog warning the Republicans of President Trump’s “racism and inanity”.

GM CEO Mary Barra, whose mission was to promote “confidence” in the automaker’s business, spoke on how views on transportation have changed since the pandemic began. She also presented GM’s “triple zero” vision of transportation, reflecting GM’s goals for there to be zero emissions, zero accidents and zero congestion.

Other prominent female CEOs were AMD CEO Lisa Su, who spoke with a group of journalists about AMD’s product road map and the company’s relationship with Apple, and Corie Barry, Best Buy CEO, who presented her vision for the future of tech and why diversity is good for business.

The presence of Microsoft’s president Brad Smith made headlines because this was his company’s first keynote address at CES in nearly a decade. Smith called the Solarwinds hack (a computer intrusion campaign that has been linked to Russia and hit multiple federal agencies and the private sector) a “mass indiscriminate global assault” that should be a wake-up call to cyber-defenders.

More in line with his company’s products, Sebastian Seung, head of Samsung Research, focused on how the world looks different and how in the new reality, people’s homes have taken on a greater significance.

Apart from tech executives, there were some industry analysts who proved prominent in the discussion – for instance, Carolina Milanesi, the founder of technology market research firm The Heart of Tech, told the BBC that seeing products in real life and networking “are without a doubt the two biggest reasons to attend CES” and that and it would be very hard to replicate these two digitally.

In addition to all the well-known names, some spokespeople from start-ups also made their way in the media conversation – for example, Chris Hosmer, founder of AirPop Health, said that Covid has really raised the awareness globally of the importance of the quality of the air you’re breathing. His company unveiled its Active Smart Mask which captures breathing-related data and incorporates a sensor which can tell wearers when to replace their mask’s filter.