Ronaldo and Coca-Cola: Has the Football Star Moved the Needle on Healthy Consumption? 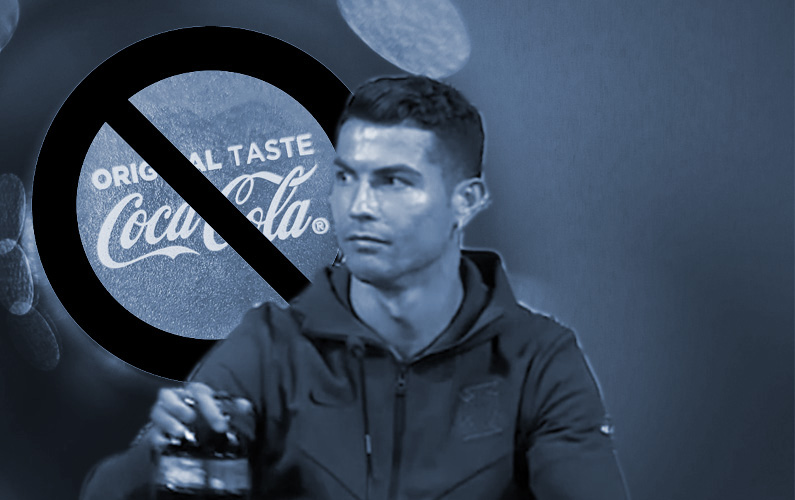 You’ve surely seen it by now – the moment when Portugal captain and football superstar Cristiano Ronaldo sat down for a press conference and pushed away two bottles of Coca-Cola, encouraging people to drink “agua!” (water) instead.

Although this bizzare incident happened more than a week ago, it’s still making waves on social media and continues to be discussed by health experts, environmental activists and comms professionals.

According to some, it might have started a new trend of celebrity activism and anti-endorsement, not least because Ronaldo’s gesture was mimicked by Paul Pogba, a practising Muslim, who removed a non-alcoholic bottle of Heineken from his press conference table, and Manuel Locatelli, who also replaced the Coca-Cola bottle on his table with water.

Ronaldo’s Coca-Cola video quickly became viral, causing a downpour of memes and making headlines across mass media outlets. It got to a point where UEFA had to warn teams that they could face fines if their players move drinks provided by sponsors at news conferences.

To dig deeper into the case, we analysed the Twitter conversation around Ronaldo’s Coca-Cola affair. We found that it was mentioned 223k times by 191k users, generating 3.16B impressions.

Ronaldo wiped off $4 billion off of Coca-Cola’s market value?

Just a few hours after the infamous conference, a lot of articles appeared all over mass media outlets, suggesting that Ronaldo’s snub at Coca-Cola had wiped out $4 billion of the brand’s value. The “news” made headlines in high-profile publications with large Twitter followings like the Guardian and Washington Post.

Many business publications echoed the thought, quoting the Spanish newspaper Marca, which had “analysed the data from the New York Stock Exchange.” The narrative served as a nice occasion for many commentators to assert that it only takes one influencer with the right message to sink a global corporation criticised for its health and environmental footprint.

This kind of sensationalist claims are usually the perfect recipe for a Twitter storm – in this case, Coca-Cola’s alleged share price drop was the focal point of the Twitter debate.

Sensationalist headlines aside, Ronaldo actually managed to move the needle on healthy consumption in the food and drink sector. Our Twitter analysis found out that apart from Coca-Cola’s market value, the second most prominent topic in the debate was Health and wellness, indicating that the star ignited a lively debate around the way soft drink can harm consumers, especially due to their high sugar content.

Many users claimed that Coca-Cola’s sugar content contributes to diabetes and obesity. Some tweeted that Coca-Cola has made a profit out of fueling the obesity pandemic, and that such kind of public health action could have a big impact on reducing the global burden of diabetes.

This debate around Ronaldo and Coca-Cola occurred at a time when health quite naturally moved into the spotlight for many consumers amid the Covid pandemic. Boosting the immune system quickly became a priority and, because people ended up cooking more at home during lockdowns, mindful eating has gained traction.

As a result, products labelled “organic” are in high demand, prompted by a growing interest in the emerging field of functional products positioned to boost immunity, help relax, aid sleep and improve mood in general. Brands are tapping into the consumers’ perception of the “naturalness” of food and drinks, which has evolved from a focus on sanitation to added ingredients like preservatives, flavours and sweeteners.

The ever-increasing health awareness among consumers, coupled with the rise of the organic food industry, has put the notion of “naturalness” at the centre of many debates around the food and drink industry. Even fast-food company McDonald’s hit many headlines when it announced it would introduce plant-based burgers, chicken substitutes and breakfast sandwiches.

But was Ronaldo hypocritical?

However, Twitter is ruthless, as any PR and marketing pro knows. Twitter users tend to dig up uncomfortable information around any celebrity.

In this case, an old Coke ad starring Ronaldo, part of a marketing campaign in China for the 2006 World Cup in Germany, resurfaced and became viral. The ad shows the Portuguese star superimposed on Coke cans and playing soccer with an ice cube in a fridge.

Moreover, others shared ads that show Ronaldo – who’s said to follow an extremely healthy, and voluminous, diet – endorsing the fried chicken giant KFC, one of the synonyms of unhealthy fast food. In a 2013 ad for the brand, Ronaldo scores a penalty before tucking into a bucket of fried chicken.

These ads led to many people accusing the Juventus forward of hypocrisy. Some noted that he was in his early 20s when he appeared in the Coca-Cola ad and joked that the advert money must have run out – or at least that the soccer star had a change of heart.

Others recounted an old tweet about Ronaldo’s former Manchester United teammate Ryan Giggs, who said the star had once arrived at training with a can of Coca-Cola, only to be admonished by his senior teammate.

However, there were also some Twitter users who said that any sort of ‘hypocrisy’ we see doesn’t negate the positive action and that we can celebrate the action and what it stands for separately because it’s about how we react to it.

Download Commetric’s social media analysis report to learn more about the main topics in the Twitter conversation around Ronaldo and Coca-Cola.