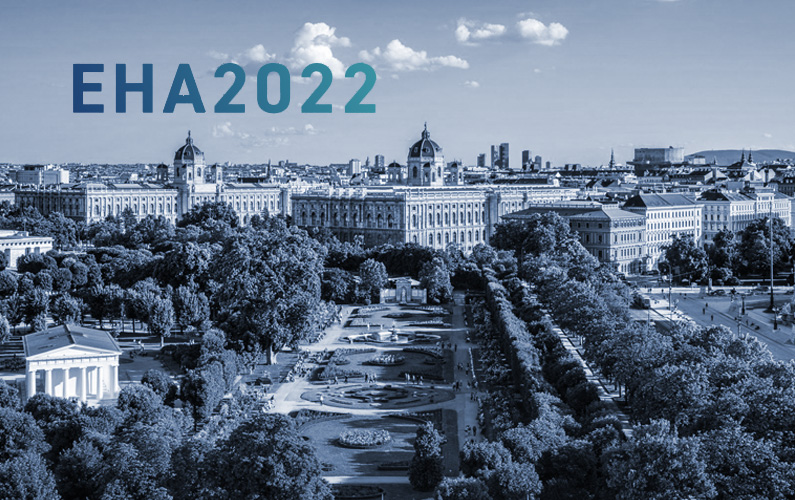 The European Hematology Association’s (EHA) 2022 Hybrid Congress blended in-person and online sessions, featuring the newest and most promising developments in the field of blood cancer research.

The meeting was covered widely by specialised pharma media outlets like Hematology Advisor, Fierce Biotech and Medscape, as well as some business publications like Reuters and Seeking Alpha. To see what stood out this year, we analysed 313 English-language articles published in June. Here are our key takeaways:

Many media outlets noted that there were some important and potentially practice-changing studies in lymphoma at EHA 2022, making this particular disease the most widely discussed one in the media conversation:

For example, AbbVie and partner Genmab presented data on their lymphoma bispecific antibody at the meeting, while Caribou Biosciences reported new results from an early-stage study evaluating an experimental lymphoma treatment that involves CRISPR gene editing.

One of the upshots from the conference was that cell therapy has become a powerful new treatment option for lymphoma and multiple myeloma. Journalists cited approved drugs from Gilead, Bristol Myers Squibb, Novartis and Johnson & Johnson that use souped-up immune cells — genetically modified and infused back into patients — to attack cancers.

Some news outlets reported that in multiple myeloma, Bristol Myers and J&J have struggled to keep up with demand, further complicating cell therapy’s use. While drugmakers expect to overcome those difficulties with time, they are busy advancing other ways to redirect immune cells to target cancer.

AstraZeneca – whose key blood cancer drug Calquence generated sales of more than $1.2 billion last year – became the most influential company as many journalists noted that its line-up of projects under trial in late, as well as early stages, is strong, with five approved and potential new medicines for hematological diseases shown off at the European Hematology Association Annual Meeting.

After the conference, AstraZeneca announced that it will acquire biotechnology firm TeneoTwo in a deal worth up to $1.27 billion, in a move to bolster its roster of therapies to treat blood cancers. The news helped boost awareness of AstraZeneca‘s presentation at EHA, as many journalists referred to it when reporting on the M&A deal.

Novartis earned its media influence as it unveiled an up—positive data from a long-term, follow-up study of Kymriah, the first-ever approved gene therapy, which made history five years ago.

The data showed that the treatment leads to durable remission and long-term survival in children and young adults with relapsed or refractory B-cell acute lymphoblastic leukemia (B-ALL). The findings demonstrated the curative potential of Kymriah in a disease with few treatment options, Novartis said.

Meanwhile, Janssen, which is wholly-owned by Johnson & Johnson, announced that the U.S. Food and Drug Administration has granted Breakthrough Therapy Designation for its gene therapy talquetamab for the treatment of adult patients with relapsed or refractory multiple myeloma.

A number of media outlets reported on incredible new data presented at the EHA that revealed an experimental CRISPR gene editing therapy is both safe and effective up to three years after treatment. The follow-up results come from one of the longest-running human trials using CRISPR technology to treat a pair of rare genetic blood diseases.

The first human trial in the United States to test CRISPR gene editing technology started back in 2019, focusing on beta-thalassemia and sickle cell disease.

The data was presented by Crispr Therapeutics and Vertex and was perceived as evidence that this type of gene therapy could represent a functional cure.

The companies previously stated they would file exa-cel with regulators in late 2022 and, assuming the treatment is approved by the FDA and payers, it could be bad news for Crispr and Vertex’s many rivals. The gene-edited sickle cell space looks particularly crowded, especially for a disorder that is relatively rare.

Several journalists remarked that positive data result in positive share price movements – something of a novelty in the current market.

The unveiling of abstracts for the EHA Congress brought clinical data that boosted the share prices of several cell therapy-focused biotechs during an otherwise terrible week on the Nasdaq biotechnology index.

Perhaps best received were the first human data for Caribou’s allogeneic Car-T therapy CB-010, sending the depressed group’s stock up 22%. Caribou, a company listed last year whose technology forms the basis of biotech Intellia’s CRISPR work, is due to present the first efficacy data from the Antler trial of its allogeneic anti-CD19 project CB-010.

Updates from Gracell and Autolus also struck a chord with the markets, though some analysts noted that for many cell therapy groups the big unanswered question remains how durable remissions – and share price uplifts – prove to be.

The most influential spokesperson in the EHA debate was Levi Garraway, Chief Medical Officer at Roche, who commented on his company’s new long-term data and other studies of fixed-duration therapies.

One of Garraway’s main messages was that blood cancer remains challenging to treat at all stages. Indeed, the media conversation around EHA 2022 reaffirmed this position, in line with the prevailing narrative around blood cancers, which are portrayed as one of the greatest health challenges of our lifetime.

Some researchers at EHA noted that in the last thirty years, research has driven progress in treating blood cancers. Thousands more people are now surviving after being diagnosed with blood cancer. New analysis showed survival rates for blood cancer have risen faster than for other common cancers in recent years.

However, according to some commentators, the pipeline of medicines for blood cancers is fit to burst as there are more than 800 cell therapy prospects currently in the hopper for just five major blood cancers, with Gilead’s and Novartis’ success in hematological cancers having ushered in an “abundance” of clinical cell therapy candidates.