ESMO 2022: How Did An Oncology Congress Manage to Create Media Buzz? 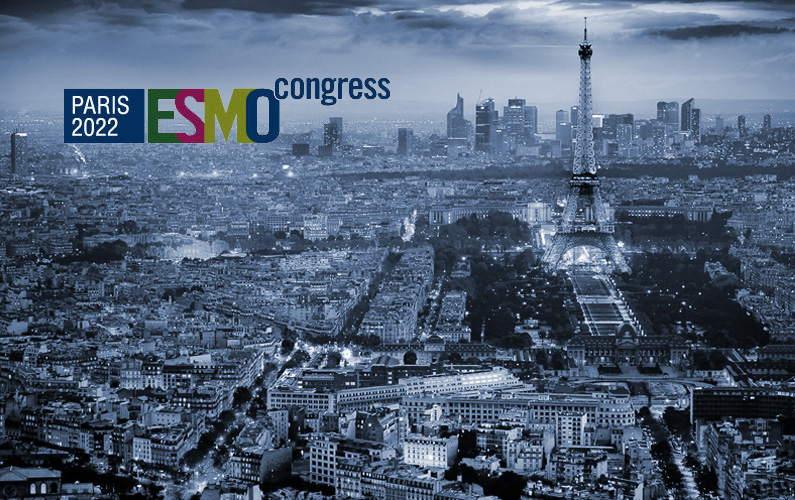 View a one-pager infographic summary of the analysis

The annual European Society for Medical Oncology (ESMO) Congress has a reputation for being the most influential oncology platform for clinicians, researchers, patient advocates, journalists and healthcare industry representatives from all over the world.

To see what stood out at this September’s gathering, we analysed 798 English-language articles published in the past three weeks. Here are our key takeaways:

1. Lung cancer received the most headlines

A new study linking pollution with lung cancer cases in non-smokers received the most media attention at the ESMO Congress 2022, making Lung cancer the most widely discussed cancer type in the discussion:

According to late-breaking data reported at the congress by scientists of the Francis Crick Institute and University College London, a new mechanism has been identified through which very small pollutant particles in the air may trigger lung cancer in people who have never smoked, paving the way to new prevention approaches and development of therapies. The particles, which are typically found in vehicle exhaust and smoke from fossil fuels, were associated with non-small cell lung cancer (NSCLC) risk, accounting for over 250,000 lung cancer deaths globally per year.

Scientists highlighted that smoking still remains the biggest cause of lung cancer, but outdoor air pollution causes about one in 10 cases in the UK, and an estimated 6,000 people who have never smoked die of lung cancer every year. Globally, about 300,000 lung cancer deaths in 2019 were attributed to exposure to fine particulate matter, known as PM2.5, contained in air pollution.

The study made many headlines in outlets like CNN, BBC, the Financial Times and the Guardian.

Journalists focused on how the study “rethinks” cancer and marked a “new era”, as the results also showed mutations alone are not always enough to cause the disease – it can need an extra element. Some analysts remarked that we needed to rethink how even smoking causes cancer – is it just the known DNA damage caused by the chemicals in tobacco or is the smoke causing inflammation, too?

2. Oncology got a sustainability narrative

Underscoring the multifaceted nature of sustainability as a societal goal, the Francis Crick Institute study offered a deeper understanding of the long-established link between air pollution and non-small cell lung cancer arising in people who have never smoked, and made clear the link between climate change and human health.

The Francis Crick Institute results were perceived as explaining how environmental carcinogens can drive cancer, deriving a public health mandate to lower the levels of these pollutants, produced by the combustion of fossil fuels.

The discovery was perceived to be of global impact because 99% of the world’s population currently lives in areas that exceed WHO’s annual limits for PM2·5. In 2019 alone, approximately 300 000 lung cancer deaths worldwide were attributed to PM2·5 exposure.

The focus on sustainability made Charles Swanton, the study’s lead author from Francis Crick Institute, the most influential spokesperson in the conversation:

Swanton pushed the idea that the same particles in the air that derive from the combustion of fossil fuels, exacerbating climate change, are directly impacting human health via an important and previously overlooked cancer-causing mechanism in lung cells. He stressed that while the risk of lung cancer from air pollution is lower than from smoking, we have no control over what we all breathe.

Swanton was also cited as saying that we have to achieve a 50% reduction in greenhouse gas emissions by 2030, and by doing so we will naturally reduce levels of PM2.5: “We can all play a part: we need to cycle more, walk more. PM2.5 cause 8 million deaths a year, not just due to cancer but also to other diseases, i.e., more than the deaths caused by tobacco globally.”

His comments and the broader discussion around the Francis Crick Institute study put oncology in a wider sustainability narrative – a perspective which was previously overlooked by the mass media.

Many articles noted that while there is advice that doctors can offer to individuals — recognising the importance of polluted air, reducing internal pollution in the home, accessing the information on local air pollution, changing travel routes, avoiding particularly poisonous days, and perhaps even contributing to lessening the problem by driving less or not all — the needed response is political action at a local, national, and global level.

3. KRAS had its moment

ESMO promised to be a conference whose most important topic was KRAS (Kirsten rat sarcoma) – a mutated form of a gene that occurs in about 13% of non-small cell lung cancers, the most common form of the disease.

In a closely watched competition among KRAS inhibitors, Amgen was framed as the leader with a randomised trial win in lung cancer. At the congress, the California drugmaker gave a first look at the detailed data that could set the bar for all others to come, including Roche and Novartis. Amgen’s therapy Lumakras cut the risk of disease progression or death by 34% compared with the chemotherapy docetaxel in previously treated KRAS non-small cell lung cancer.

In May 2021, when Amgen’s Lumakras (sotorasib) was launched, the milestone was met with great fanfare. Intended for certain patients with non-small cell lung cancer (NSCLC) who have a particular mutation in the KRAS gene, it was the first ever approved KRAS inhibitor.

Although researchers have known about KRAS mutations for nearly 40 years, targeted therapies have proven elusive. In addition to lung cancer, KRAS drives a high proportion of colorectal and pancreatic cancers, while the broader RAS gene family mutations present in around 25% of tumours overall.

Per market estimates, Amgen’s Lumakras is forecast to make $1.6bn in sales by 2028. Many of the big pharma players, including Novartis, Roche and J&J, were mentioned in the conversation as staking their own claim in this space, with a wave of G12C blockers in clinical trials. There was a general feeling that these drugs will eventually be approved for a broader cohort of patients – for instance, they may prove effective as a first-line treatment.

4. AstraZeneca became most influential as it aims to be oncology leader

Despite the news around Amgen, AstraZeneca emerged as the most influential company in terms of media impact.

AstraZeneca attracted media interest with its announcement that it is aiming to more than double its portfolio of new cancer drugs by the end of this decade, seeking the top spot in the world’s most lucrative category of medicines. Many commentators noted that Astra needs to unseat Bristol Myers Squibb and Roche to be oncology leader.

The UK drugmaker had a regular media presence in the broader oncology discussion as it has added seven new cancer medicines since 2014, after Chief Executive Officer Pascal Soriot made a risky bet on an oncology pipeline to revive growth and ward off a hostile takeover from Pfizer.

Now, with blockbuster treatments for malignancies in the lungs, ovaries and blood, AstraZeneca aspires to be the fastest-growing maker of cancer drugs, as oncology chief Dave Fredrickson put it during ESMO. He was cited as stating that growth will come from cutting-edge technologies that harness patients’ own immune systems to fight cancer as well as targeted treatments that can help eliminate the need for standard chemotherapy.

Recent successes that got media traction included Enhertu, a breast cancer therapy acquired via a $6.9 billion partnership reached in 2019 with Japanese developer Daiichi Sankyo. Trial results for showing the drug’s potential to treat more patients prompted a rare standing ovation at a key American medical oncology conference last June. By 2026, it will probably be a blockbuster treatment as well, according to analysts surveyed by Bloomberg.

Another company that got under the media spotlight with its market ambitions was Roche, which aims to carve out a market for its therapy Tecentriq by targeting a neglected group of patients. The unique market Roche has spotted covers patients with advanced non-small-cell lung carcinoma who cannot tolerate platinum-based chemotherapy.

5. Early cancer detection with blood tests was framed as a game-changer

Another development that made headlines was a significant change in early cancer detection that is set to impact nearly every stage of cancer diagnosis and treatment. A study by biotechnology company Grail was the first prospective investigation to show that multi-cancer early detection (MCED) blood testing can detect cancer in patients with undiagnosed cancer, as previous studies used tests only in patients already known to have cancer.

The advent of blood tests that can detect multiple cancers at early stages was regarded as not only reshaping how the disease is diagnosed but also bringing about a major shift in the delivery of care.

According to Fabrice André, Director of Research at Gustave Roussy Cancer Centre at Villejuif, France, in the next five years, more doctors, surgeons, nurses as well as diagnostic and treatment infrastructure will be needed to care for the rising number of people who will be identified by multi-cancer early detection tests. “We need to involve all stakeholders in deciding new pathways of care. We need to agree who will be tested and when and where tests will be carried out, and to anticipate the changes that will happen as a result of these tests, for example in the diagnosis and treatment of people with pancreatic and other cancers that are usually diagnosed at a much later stage,” he announced.

The debate around the early detection study also touched upon health equity, as the accessibility to testing is expected to vary and may potentially widen health inequity between countries. Some commentators remarked that from a clinical point of view, the proportions of patients who can undergo multi-cancer testing can be improved, but first there need to be laboratories that are able to perform these types of tests – which means that economic barriers have to be overcome, especially in developing countries.

The impact of early screening tests on patient wellbeing was another consideration in the media conversation. Analysis from the study explored the potential for early cancer detection testing to cause anxiety and distress in individuals with positive test result. The reliability of the tests is particularly pertinent if they are used to detect cancer in patients with no clinical symptoms and who are unaware of the risk of a potential diagnosis.