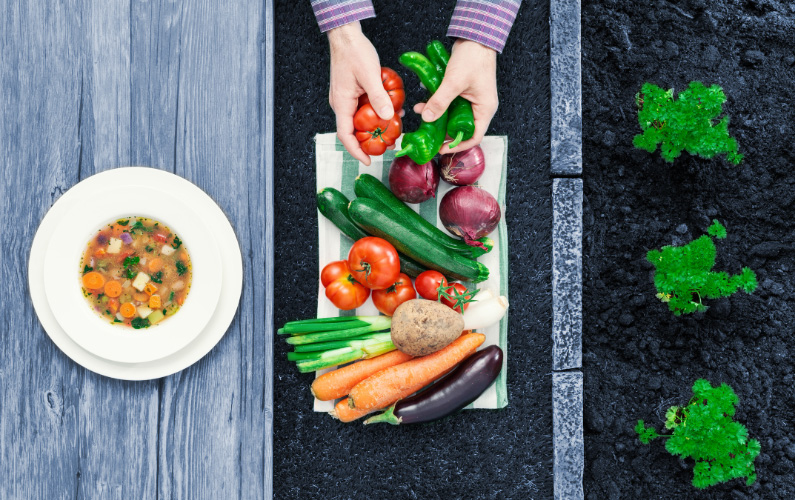 Food systems leave a major mark on the environment—from agriculture utilising half of the world’s habitable land and the majority of its freshwater to livestock production generating 14.5% of greenhouse gas emissions.

As the awareness of these issues grows, sustainable eating is becoming a major consumer food trend, with more shoppers buying plant-based foods as part of a ‘flexitarian’ or vegan diet. In addition, the term climatarian – referring to people who campaign to stop global warming by changing their eating habits – made its way to media outlets such as The New York Times and The Independent.

To see how brands can use PR to tap into the trend, we analysed 3,639 English-language articles published since the beginning of the year. Here are our top tips:

1. Make the link between diets and emissions clearer

We found that the majority of media outlets suggested that avoiding meat was the main way a consumer could help the environment when it comes to changing their eating habits. Many articles pointed out that meat production is a substantial contributor to greenhouse gas emissions – beef production especially – and the environmental burden deepens, as raising and transporting livestock also requires more food, water, land, and energy than plants.

Against this backdrop, the bulk of companies’ messaging focused on the personal health benefits of plant-based ingredients, while there’s an opportunity for PR campaigns focused on environmental concerns, as consumers are increasingly considering the environmental impact of the products they order.

The initial problem many people face before even taking any action is that they struggle to get their heads around what exactly sustainability means. For one, ‘eco-jargon’ confuses people. For example, carbon emissions is a very abstract concept, with few commonly known reference points and one that is hard to visualise, making informed judgments difficult. In fact, recent research by The Behavioural Architects for Smart Energy GB found that people associated ‘tonnes of carbon’ with factories and transport rather than households and individuals.

PR pros should make it clearer that carbon emissions are associated not only with factories and transport but also with individual food choices. To do that, they need to go beyond framing products as “good for you” and engage in ongoing communication to properly educate consumers on what they are doing around sustainability.

2. Tread a fine line between negative and positive messaging

Having mentioned reducing emissions, brands in the sustainable food space shouldn’t limit themselves solely to negative messaging relating to how they curb their environmental impact. The language of sustainability often focuses on reducing impact, but the most inspirational brands tell positive, aspirational stories about creating a net positive impact on society, the economy and the environment by putting back more than they take out.

According to a Wunderman Thompson study, 83% of consumers think businesses and brands should focus on a positive impact, rather than just doing less harm to the planet. Many see the solution in the emerging concept of “regeneration“, which goes beyond mitigating harm and means actively restoring and nurturing, creating conditions where ecosystems and economies can flourish.

In our research sample, a number of companies managed to earn influence in the sustainable eating debate namely by focusing on positive messages around regeneration – including the most influential company, PepsiCo.

One of the biggest polluters in the world, PepsiCo got into regenerative agriculture by saying it would restore about 7 million acres of farmland by 2030 — the equivalent of how much land it uses to grow the ingredients for its products.

Another major polluter, Nestlé, emerged as an influential company as it announced it is investing 1.2 billion Swiss francs ($1.29 billion) over the next five years to accelerate the transition to regenerative agriculture across its global supply chain.

By now it’s clear—doing less harm is not going to be enough. Nor are tokenistic nods to regeneration. A truly regenerative approach should be properly yoked to business and brand initiatives from strategy to social justice, guiding decision-making and delivering positive impact across the triple bottom line of people, planet and prosperity.

A key task for communicators when it comes to sustainable eating is in helping to drive behavioural change among consumers, to close the gap between what they say and what they do – the so-called intention-action gap.

Brands can use PR to close this gap by creating urgency – by breaking the issue down into smaller and more specific areas to make it more accessible and relevant to consumers. Sustainable food campaigns will perform better if they do not just dwell on the challenges but leave people with a more inspiring and positive view. While guilt can be useful, it can also be a route to disgust, rejection and apathy. Instead, messages need to help people take concrete action and feel in control.

But perhaps the most effective approach would be to rebrand sustainable lifestyles – be cautious implying lack, trade-off and sacrifice and tap into positive visions of a future that people are motivated by.

Companies could look at how one of the best communicators in the sustainable food debate – Bill Gates – has done a good job of tapping into positive visions of an aspirational future, thus becoming the most influential spokesperson in our media sample:

Bill Gates shared his vision that all rich countries should move to “100% synthetic beef” namely by rebranding sustainable lifestyles – he focused on properties like taste, saying that meat alternatives are going to taste even better over time. He didn’t present eating meat alternatives as a trade-off but as an equally good option that has the potential to save the world.

However, you might want to avoid the word “synthetic” when it comes to food. Gates used the term in an interview with MIT Technology Review, despite the fact the type of meat he’s invested in with Upside Foods (formerly Memphis Meats) isn’t synthetic at all. It’s real meat, only instead of being grown on an animal, it’s grown in a bioreactor.

While this might seem like nitpicking, terms like ‘synthetic’ and ‘lab-grown’ – while often wrongly applied – really turn consumers off and are easily weaponised by culture warrior-minded politicians looking for their next grievance to make hay with on social media.

4. Go beyond broadcasting and engage consumers with calls to action

Many companies in our research sample – including PepsiCo, Nestlé, McDonald’s and Bayer – continue to broadcast their sustainability messages as a one-way communication channel that talks about what they are doing.

But ESG strategies should shift from a process of self-regulated accountability to behaviour that today’s grocery shoppers not only expect – it’s one they want to actively participate in.

The problem here is that consumers also lack a clear understanding of what’s most important to change in their lives. Overall, consumers don’t have a joined-up thinking on sustainability and how to build a low carbon footprint.

People want to be given a clear goal and then have laid out in front of them the steps they need to take to get there and how to go about achieving them. This is clearly demonstrated when we look at what types of sustainable food content consumers engage with on social media.

PR pros should make sure that brands have their voices heard in such how-to articles. They should think through the lens of the consumer to identify micro-moments of routine which can unlock new opportunities to shift behaviour change.

For instance, PR campaigns could include specific calls to action suggesting that consumers should prioritise local produce from farm shops, opt for what’s in season and eat more perennials like asparagus, grapes, artichokes, and rhubarb because their long life cycles (and deeper roots) help fortify soil against erosion and reduce runoff.

5. Use the cost of living crisis to frame sustainable diets as budget-friendly

Significant changes in culture, life and circumstances have always changed shoppers’ behaviour. We saw this at the start of 2020: thanks to the ‘Blue Planet effect’. Plastic became public enemy number one, but an unfolding global pandemic saw shoppers need states change; plastic packaging became sought after as it was considered more hygienic.

Now, many commentators worry that the cost of living crisis will make consumers deprioritise sustainable products. The main reason is that sustainable groceries have long suffered from a perceived (and in some cases actual) price barrier. Inflation and the cost of living crisis, therefore, threaten to make the intention-action gap worse as consumers juggle their priorities.

However, PR practitioners can use the crisis as an opportunity to frame sustainable diets as budget-friendly. For example, good ways of both saving money and eating sustainably are cooking with food scraps and making a more conscious effort to waste less food.

And veggies are still cheaper than meat, right? Supporting the move to plant-based diets is a nice way to both provide households with more acceptable food prices and reduce emissions impact. Presenting sustainable eating as a budget option can ultimately help to do away with the perception that sustainable products come with a price premium.

To keep sustainability on consumers’ agendas as prices rise, brands need to make it a problem that has direct relevance to their lives which requires urgent action, approaching communication differently while making sustainability accessible across all levels of the price spectrum. PR pros can make the planet personal by bringing the issue down from corporate, political and environmentalist speak to be discussed with more of a human touch.