What Does CES 2023 Mean for Tech PR and Comms? A Media Analysis 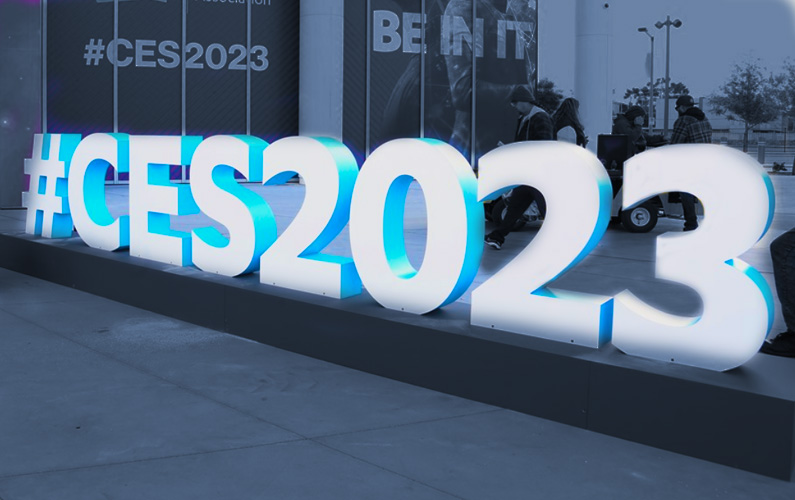 For the media, CES is a feeding craze—more than 6,300 media members from 75 countries lick their chops at the chance of landing top headlines for their respective publications. Nearly a quarter-million stories are generated from a single week of media engagement during CES.

For this reason, no matter the size of your brand, CES is a premier PR opportunity to generate tremendous buzz around your brand. This is why at CES you’ll find multinational titans to newbie startups alike, each and all in quest of good media coverage, the right retailers, the right distributors, and the right partners.

We analysed 1,622 English-language articles published in the last month to see what this year’s show could mean for PR and comms in the tech sector. Here are our top takeaways:

For the past decade or so, smart home tech has been about as dominant as it gets at CES. That was once again the case in 2023, with the usual surge of new device announcements from brands both big and small (plus some weird and wonderful ones).

This year’s crop in Las Vegas had something else, though: support for Matter, the newly launched, open-source smart home standard that brings compatibility with Amazon Alexa, Apple HomeKit, Google Home and Samsung SmartThings within a single wireless protocol.

In other words, devices that work with Matter should work with just about everything, and at CES there were all sorts of new devices making that exact pitch.

This is what made Smart home devices the most widely discussed topic in the CES 2023 debate:

Many media outlets noted that Matter was the buzzword throughout CES 2023 this year, with most companies even remotely connected to the smart home loudly discussing their Matter plans. The new smart home standard was featured in several keynotes and displayed prominently in smart home device makers’ booths as well as in Google, Amazon, and Samsung’s big displays.

Its undeniable momentum at the biggest consumer tech show of the year was one reason some prominent publications like The Verge named Matter “best in show” for CES 2023.

More importantly, dozens of companies and manufacturers announced specific plans. Several companies said they would update entire product lines, while others announced new ones, sometimes with actual dates and prices.

CES has never been a substantial phone show – you’ll need to wait until next month’s Mobile World Congress for more reveals — but Samsung managed to create a little buzz with a foldable concept device that bends in more than one way.

Together with its Matter smart home devices, this helped make Samsung the most prominent company in terms of media impact. We determine an organisation’s media impact in the context of a topic by looking at its media influence score calculated in terms of coverage by high-profile media outlets, topic relevancy score measuring its contextual relevance, and media visibility as measured by the number of mentions.

Last year at CES, Samsung folded its displays nearly every way you could think of, but this year it’s combining that with another manoeuvre — sliding. The Flex Hybrid OLED mobile screen, debuting at CES 2023, can both fold from one side and slide out on the other, changing both the size and aspect ratio.

But as with most things at CES, the Flex Hybrid sheds light on where our phones can go, and just how crazy these foldables can actually get. It was enough to impress CNET Editor Eli Blumenthal, shattering his jadedness and reminding him that phones can be cool again.

That other once-omnipresent mobile buzzword, 5G, on the other hand, barely made a blip at the exhibition. We’re a few years into the technology, and while it’s faster (in some areas), it hasn’t really shown itself to be the game-changer it was hyped up to be. The Consumer Technology Association, which organises CES, believes 5G will still be important, but with less buzzy business applications and devices.

3. Sustainability will become an even bigger priority for tech

If there was one thing everyone at CES could agree on, it’s that sustainability is a priority. Virtually every company talked about how its products would be more sustainable, from Samsung‘s partnership with Patagonia to reduce microplastics in the water supply to Asus‘ boast that it has used 1,500 tons of recycled plastic in its products since 2017.

One of the Consumer Technology Association’s key priorities this year was emphasising the social and environmental impact on tech, and companies got the message, often leading with sustainability as the first topic during their keynote presentations.

The climate crisis has emerged as one of the most critical issues of our time, so it’s no wonder that it was all over CES. That so many companies are taking this more seriously is another sign that consumers are starting to care. But, as many journalists pointed out, this represents only the first steps for the tech industry.

4. Automakers are positioning themselves as tech brands

A number of media outlets noted that CES has increasingly turned into an auto show, with carmakers like GM and BMW routinely showing off concept cars in a bid to let us know that they’re actually tech companies too. But CES 2023 also saw a number of traditional consumer electronics players make a bid to define how you’ll spend your time in a car going forward.

Perennial South Korean rivals Samsung and LG each pitched their own smart car platforms. Taking a more ambitious approach to cars was also Sony, which used its keynote to show off its Afeela electric vehicle, built in partnership with Honda.

These companies were all scrambling to paint a picture of how your relationship with your car may change, especially with the rise of self-driving cars. They were also looking to wrest some of the control back from Apple and Google, which have become the dominant car platforms with CarPlay and Android Auto, respectively. LG and Samsung, in particular, were likely hoping to become viable alternatives for the automakers.

But the automakers weren’t going to be outdone, increasingly positioning themselves as tech brands.

BMW, for instance, used its keynote to show off the i Vision Dee (or “digital emotional experience”). Its CEO Oliver Zipse actually became the most influential corporate spokesperson in the debate:

Zipse attracted media attention by showcasing how the future of mobility can merge the real and virtual worlds, and by presenting BMW‘s vision of the ultimate digital driving machine.

5. Touch and smell become the next big thing for the metaverse

The metaverse — essentially a buzzword for three-dimensional virtual communities where people can meet, work and play — was a key theme during the four-day tech gathering in Las Vegas. In the spotlight were wearables that have traversed across senses such that you can not only immerse yourself through sight and sound alone but also touch and even smell your virtual surroundings.

A VR headset that turned heads was HTC‘s Vive XR Elite, which is set to take on the big players such as Facebook‘s Quest Pro and Apple’s much-awaited headset. This headset had a dedicated depth sensor on the front, along with colour passthrough cameras that can eventually show mixed reality experiences, similar to the Quest Pro.

Some spokespeople managed to earn their influence by painting a futuristic picture of how the metaverse will replicate physical experiences. For example, Aaron Wisniewsk, CEO of Olfactory Virtual Reality (OVR), was quoted as saying that the quality of VR experiences will be measured by how immersive and emotionally engaging they are, with the sense of scent imbuing them with unmatched power.

But CES exhibitors weren’t the only companies declaring their VR-focused intentions. In a perhaps conveniently-timed leak, details of Apple’s mixed reality headset found their way to The Information last week, suggesting that the tech giant is going for a lighter, more manoeuvrable product than its competitors.

There was also a debate over whether the metaverse should even revolve around virtual reality, or whether the technology is “a distraction”. Either way, major players showed that they are willing to follow Mark Zuckerberg’s Meta down the VR path.