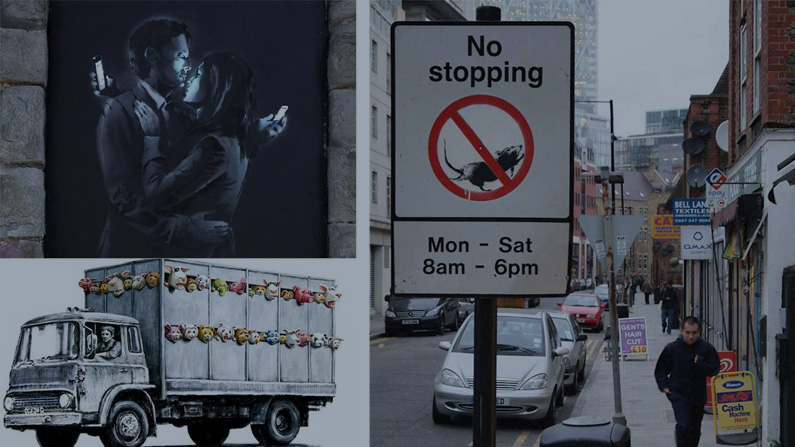 A month like no other went by in the five boroughs, where artist Banksy took by storm the streets of New York for his latest “Better Out Than In”, a self-proclaimed residency in the city. Graffiti, constantly moving trucks with stuffed animals or with a portable garden, various instalments, an unpublished op-ed letter to the New York Times, unnoticed sell-out of original pieces, along some interesting audio guides: this was all part of the project. “Better Out Than In” could even be interpreted as an instalment on a giant scale by its own right, every day, for 31 days in a row, to the astonishment and awe, to the dismay, to the mockery or sometimes even offense of New Yorkers. Probably the only sentiment absent was that of indifference. But first, a moment of retrospection.

We know very little, that is to say nothing really, about who Banksy actually is. So I suggest we skip the usual ‘who he might be’, ‘how does he look’, ‘is he in fact a woman’, ‘where he might have been born, brought up or what he usually had for breakfast when he was 8 and a half’ routine. Although I personally wonder if he likes skydiving. Anyway. If you, however, really need to know all of this, I am afraid you just might have missed the point.

Because even if we knew all of this I would skip it altogether again simply because it is irrelevant. It may be for some art historians — oh wait, I think I just heard some old chaps from the Academy croaking with a flinch of fear: Banks..? Who? — but it’s hardly relevant to what makes a person with a spray an artist and an artist a truly great one. All you have to do is just look at his art works themselves, his impact over groups of people, or even entire societies, and their response to him.

From Bristol to London, from Paris to Sydney and even in Palestine, where one of his most high-profile graffiti was once drawn, Banksy went, saw and conquered with a unique blend of satire, political and social commitment and commentary, thrown together with recycled pieces of art and wisdom of all media available. Banksy made people smile, sometimes he made them cry, but above all: he made them stop and think for a moment. And that is all there is to it, all that is important.

‘Better Out Than In’ New York residency

So, a graffiti artist taking up a residency in a certain city, be it New York (arguably the greatest city in the world), might make you wonder “What’s the big deal?” and even think “I took a residency there once for more than a month, and even wrote ‘I was here’ on a bus stop, but no one seemed to notice!” Well, the big deal is this time a lot of people noticed, took pictures and talked about it and will continue to do so for quite some time. Same with us here at Commetric. With several team members being quite big Banksy fans*, we decided to take a deeper look at what happened, what was most discussed, which art works provoked the most controversies and debates, what made people go hunt for the tomorrow’s Banksy in the middle of the night, becoming part of the newest obsession of New Yorkers.

The residency through the eyes of a little blue bird

We went ahead and dug in deep in the Twitter conversation sourcing more than 34,000 English-language tweets with the special hashtag #banksyny: from the early hours of October 1st when the first Banksy piece appeared on the streets of New York until October 31st, when it all ended, to the relief of some and the disappointment of many. 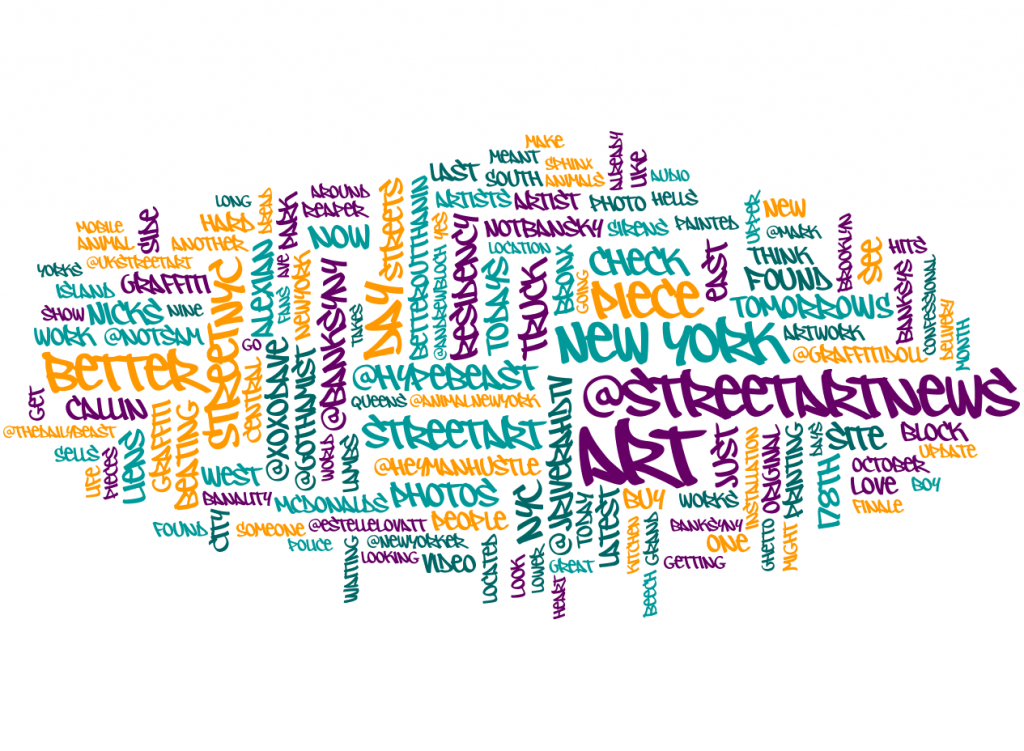 The word cloud reveals the key words, top hashtags and @references shaping the #banksyny Twitter discussion. Banksy and #banksyny were omitted from the cloud in order not to overshadow the other terms. The word “art” was the most used in #banksyny tweets. Action verbs such as “check”, “go”, “found”, “see”, “make”, “get” were also commonly used by Twitter users, highlighting the engaging effect of the the artistic project.

While it is no surprise that 73% of all tweets were generated within the US, there was also a strong global response, which speaks of the interest in the artist and his work and, subsequently – his impact. Apart from the US, most tweets originated from the UK, Canada, the Netherlands, Australia and France. Overall, Twitter accounts from an impressive 118 different countries tweeted with the #banksyny hashtag. 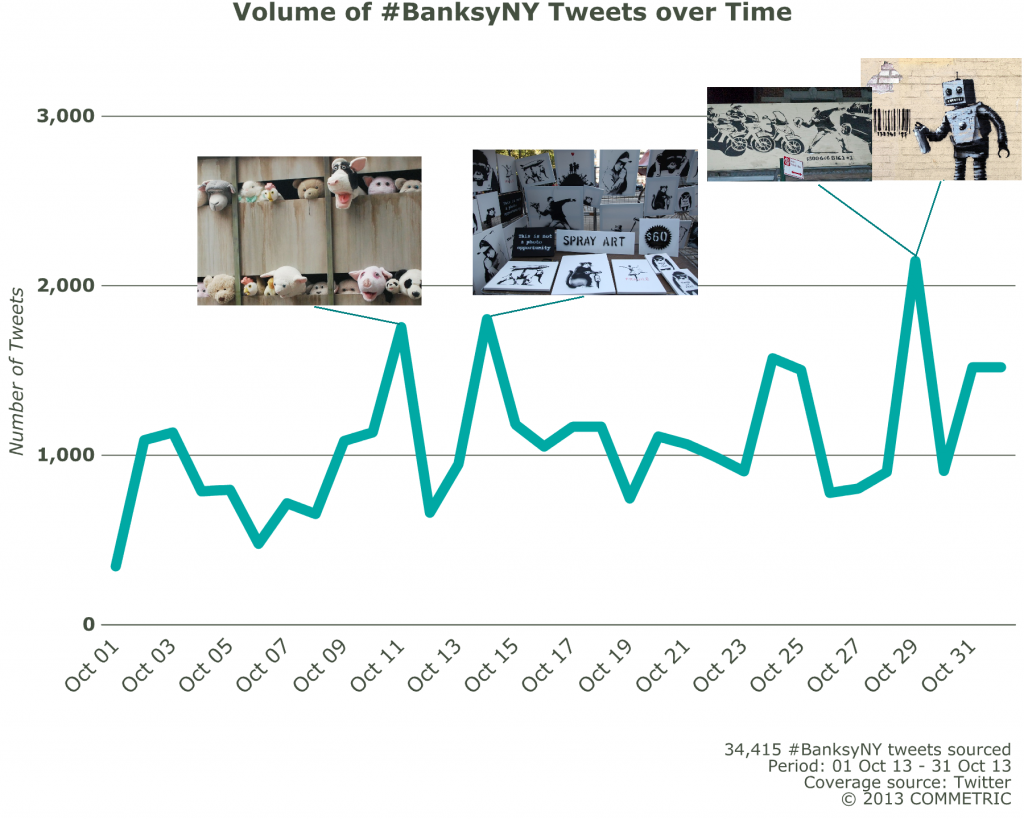 The trend graph above shows the development of the Twitter conversation by day and highlights which of the Banksy pieces and instalments provoked them. The first big peak in tweeting activity was driven by ‘The Sirens of the Lambs’ moving truck instalment on October 11th, followed by the unannounced sell-out of original Banksy pieces in Central Park a couple of days later.

The biggest peak in the #banksyny conversation was towards the end of the month – on October 28th. The Banksy art work for the day was a graffiti of a robot in Coney Island. However, the primary reason for the peak was not an original piece, but a “fake”, or a “remix” as some called it – a mural, inspired by Banksy’s classic “Protester”, used by artist activists Right of Way, who aimed “to highlight the NYPD’s active role in traffic violence.” A tweet by Dave Boudreau/@xoxodave “@JRiveraHDTV FOUND! TOMORROWS #BANKSYNY! 178thand St Nick’s, site of Alexian Lien’s beating. Check the call-in. http://t.co/YxtzRE9Wtg” was retweeted more than 1,000 times, contributing significantly to the peak in the #banksyny tweeting activity. 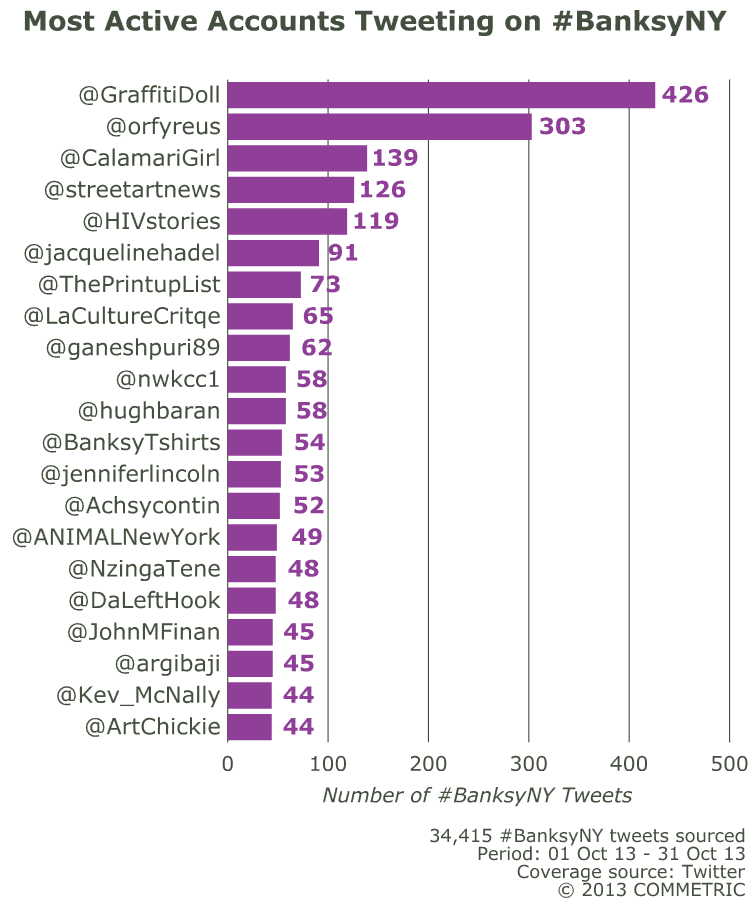 The most active twitter accounts to tweet with the #banksyny hashtag are listed in the bar chart above. The most popular among them was the account @streetartnews, which is devoted to “pictures of walls with things painted on them.”

The most high-profile Twitter user to tweet with the #banksyny hashtag was singer Kelly Rowland, who only tweeted once. Rowland retweeted a post by fan Ghazy Vakili, highlighting that Banksy has quoted the singer on the ‘Better In Than Out’ website.

And finally, here is a selection of some of some more #banksyny tweets:

@cnni: “New York’s latest obsession? Locating the latest #Banksy! Explore the map to see where he has left his mark.”

@antianti1978: “Banksy is to begin a whole month of pretentious cuntery in New York. Well, at least he isn’t being a talentless twatmonger here.#banksyny”

@EdFoster_Hull: “#banksyny; I recently saw the NY gallery and all the artwork there is great : ) It’s nice to see art that also brings a message and a smile.”

@GraffitiDoll: “People ask why I want to have an exhibition in the streets, but have you been to an art gallery recently? They’re full.”

@SwiftNiv: “I love what Banksy’s doing in NYC. “Today’s art has been cancelled due to police activity.” #banksyny pic.twitter.com/ZBglvEpgrK”

@LaCultureCritqe: “#banksyny Wherever #banksy strikes, people flock towards those locations and spend their $ supporting those area’s local businesses.#tourism”

‏@LaCultureCritqe: “Hey Mayor Bloomberg: don’t you get it? #banksyny is raising the property value of buildings all over #nyc. Is it a such a crime to add value?”

@kolbster69: “really loving #banksyny keep up the good work man (whoever you are)”

@AlexanderMorlan: “The worst part of November is no more #banksyny”

*The author is perhaps the most devoted fan in the Commetric team: once, while living in Scotland, he travelled 13 hours by bus and then waited on a queue four hours in the rain to attend the “Banksy versus Bristol Museum” exposition. Another team mate, while at Oxford, only travelled three hours and waited two hours in the sun, and thought it was a big deal until hearing about Rangel’s adventure.
Photocredit: Artwork by Banksy