An Analysis of Ebola Coverage in Politicized U.S. Media 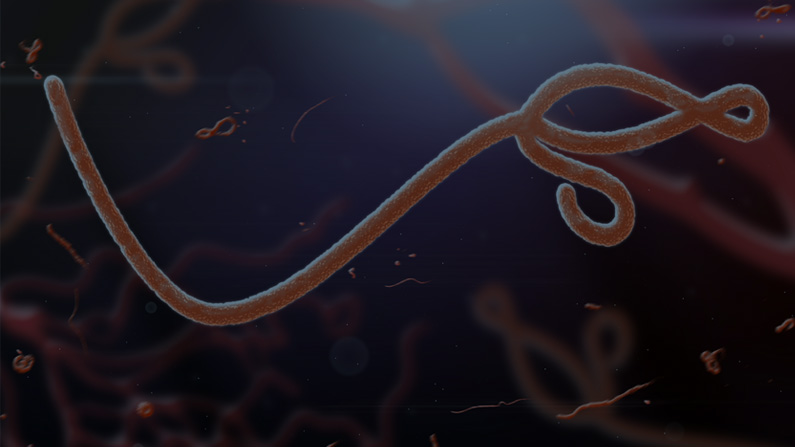 It has been over nine months since news of the Ebola outbreak in Western Africa first erupted into Western media. Since 1976, there have been more than 30 outbreaks of Ebola in the world but officials declared this one “history’s deadliest.”[i] Starting in December 2013 in Guinea, its potential to spread caused the World Health Organization to name it a public health emergency of international concern. Until the end of November 23rd, 2014 there had been 15,935 confirmed, probable and suspected cases, 5,689 deaths and eight previously and currently affected countries, including the U.S. (data from the World Health Organization) 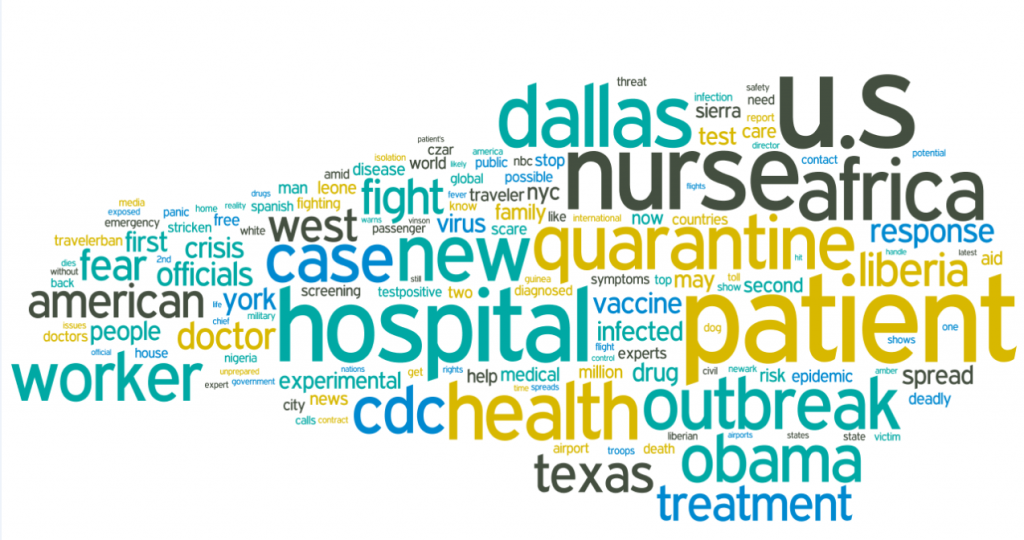 In this context, it is no surprise the media coverage has been so intense. In the U.S., there have been four confirmed Ebola cases, one of which was fatal. Outlets are not only transmitting the latest news but analyzing and debating the measures being taken to contain and treat the disease. Conservative radio host (and qualified epidemiologist) Michael Savage labelled it ‘Obola,’ reflecting the political nature of the debate and spokespeople from all viewpoints have been weighing in. Because the subject of Ebola and its prevention/containment has been in large part political, Commetric wanted to greater understand the dynamics of this discussion by analyzing politicized media. To do this, we selected the most prominent left/liberal and right/conservative media outlets and used a sample from prominent mainstream media as a control/ comparison.[ii]

Our findings were interesting. We found some distinct differences in the way in which Ebola was reported according to the viewpoint of each set of media outlets. Right-wing outlets were far more active overall, publishing twice as much content. However, this content was much shorter in terms of article length; it was less likely to be a feature piece with accompanying analysis. Further, these outlets tended to focus on those aspects of disease control that are subject to political decision and administration. Should travel bans be implemented? Are the Centers for Disease Control and Prevention (CDC) competent? In comparison to the other media types, much more space was given to President Obama’s response and his appointment of Ron Klain, a non-doctor, as the Ebola response coordinator (the “Ebola Czar”). Overall, the narrative was critical of the handling of the disease. 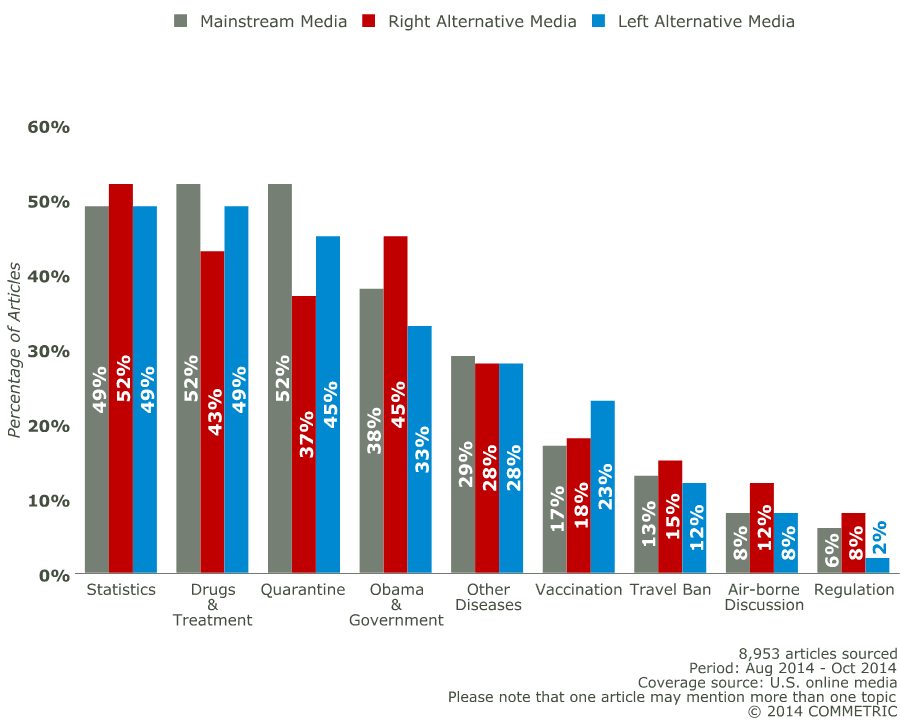 Left-wing and mainstream media on the other hand focused on the details of the disease and its treatment. These outlets gave much less space to President Obama and the government’s handling of the response. The quarantine issue was widely debated, following the contradictory announcements about whether the transmission period was 21 days or 45. Left and mainstream outlets also focused on drug development and what needed to be done to contain the disease. These outlets also tended to focus in on specific, personal aspects of the issue, rather than generalizing about the quality of the response.

The news of Thomas Eric Duncan was a huge touchstone to the debate and typified the patterns seen in the coverage. Duncan was a Liberian that had been visiting family in Dallas and unwittingly brought Ebola into the country. After being sent home after arriving at Texas Health Presbyterian Hospital and declaring he had the disease, he was later admitted and went on to infect three medical care givers, including two nurses, Nina Pham and Amber Joy Vinson. The right-wing media saw his treatment and the subsequent infection of others as a sign of an endemic failure in Obama administration management. It focused on the issue of travel bans and whether they might have stopped Duncan from flying to the U.S. and also whether Amber Joy Vinson should have taken two internal flights after treating Duncan. Left-leaning media on the other hand, downplayed the wider implications of these events and instead focused on the personal aspects of the story, such as Vinson’s pending marriage and the possible destruction of Pham’s dog. 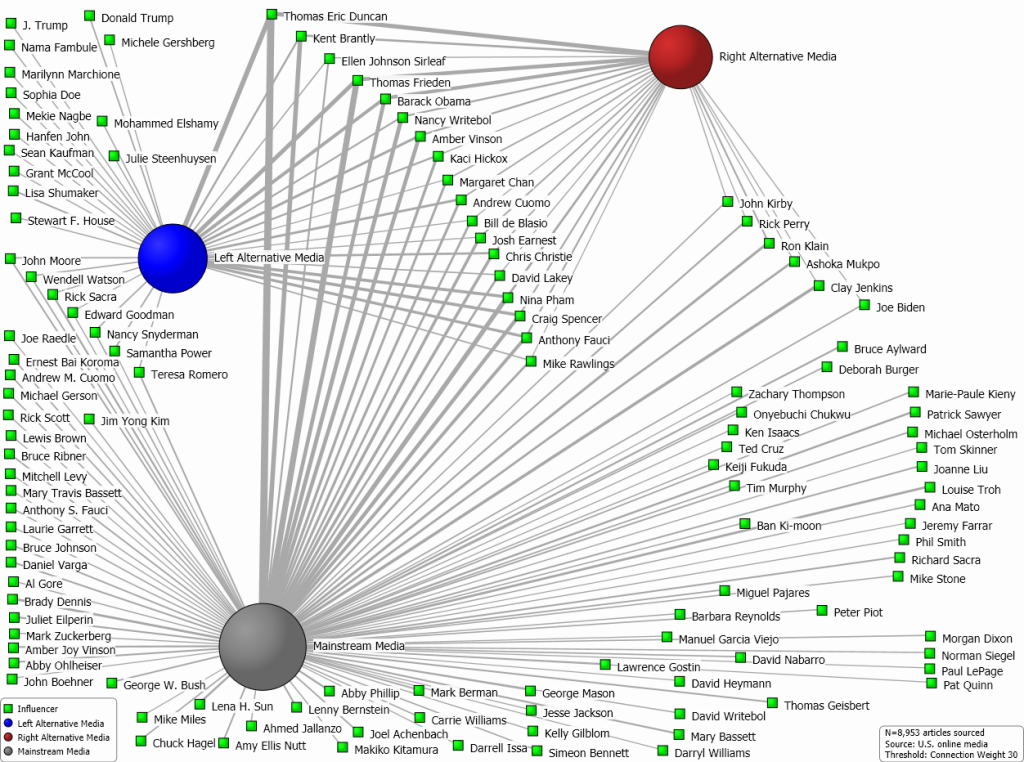 Another interesting finding was the far greater amount of passing references to Ebola in right-wing media, compared to the rest. This could suggest that the right was trying to raise the general visibility of Ebola as a discussion subject, in effect cashing in on its potential as a vehicle with which to criticise the Obama administration. It is also interesting that since the research, media volume of the outbreak has fallen while the situation as it relates to victims of the disease in the U.S. and Africa, remains pretty much the same. We could also note that the November mid-term elections have now passed and both left- and right-wing media claimed that Republican and Democrat politicians rode the Ebola debate train to attract more votes.

So, this prompts us to ask, is the Left trying to downplay the seriousness of the situation and, more importantly, the possible impact of travel bans on the economy? Or, is the Right exaggerating the situation, at the risk of causing hysteria, in order to condemn President Obama and his policies?