Europe continues to be a major topic in mainstream and social media, with debate about whether the UK will remain in the EU being the main issue. Nick Clegg’s view was expressed on the matter as well as that of the major investment banks. Nigel Farage continues to gain column inches and profile on Twitter with contentious remarks about immigration, this time in response to the European Commission’s attempts to prevent further migrant deaths. News of the economy is centred around Labour and Conservative while Twitter and forums, notably ‘Pistonheads’, debate the deficit.

We’re entering the final week of the election campaign and the media discussion is gathering pace. Our analysis shows that Europe, Immigration and Housing were the three most talked about election issues this week in mainstream and social media. Other rising topics included the Economy, Environment, Defence & Foreign Policy and Crime / Law & Order. This week we  focus on Europe, Immigration and the Economy to uncover what is driving the debate.

HSBC’s announcement that it could move its headquarters out of the UK was a key story this week, but it was the possibility of a referendum on Britain’s membership of the EU that was the main story. Nick Clegg’s view of this and his potential position as kingmaker was much discussed, his ‘life support system’ analogy proving newsworthy: “I totally rule out any arrangements with the SNP – in the same way I rule out any arrangements with UKIP – because there is no meeting point for me with one party that basically wants to pull our country to bits and another party that wants us to pull out of the EU. “I would never recommend to the Liberal Democrats that we help establish a government which is basically on a life support system, where Alex Salmond could pull the plug any time he wants. No, no, no.” (Financial Times, 24th April). Meanwhile, the investment banks told Reuters what they thought would happen to the markets according to who takes power after the 7th May. 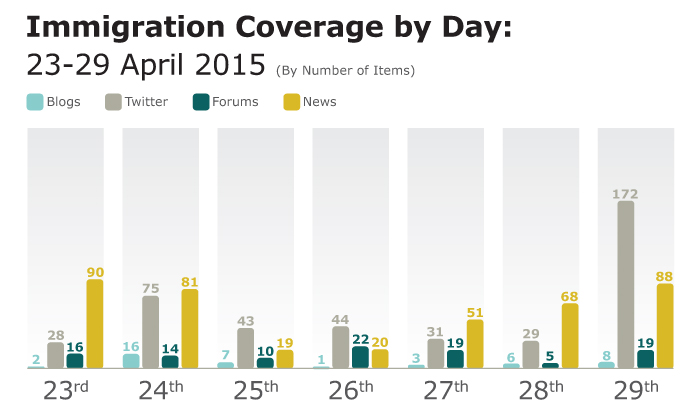 The Libyan migrant crisis continued to be a major topic of discussion in mainstream news about immigration. Reuters suggested that “voters’ wariness of immigration means few [EU States] are willing to take in many more refugees”. European Commission chief Jean-Claude Juncker’s call to increase legal immigration and spread the distribution of migrants across the 28 states, was supported with 449 votes to 130 in the European Parliament which served as fuel to the UKIP fire. Nigel Farage gave an interview to Sky News in which he claimed the policy would lead to a “flood of Islamic extremists”. His comments were criticised as “populist and despicable” but nonetheless contributed to a boost in coverage volumes and a surge of support from UKIP supporters on Twitter.

On a lighter note, comedian Dara Ó Briain tweeted ‘Obviously, I should be focussing here on the UK general election, but I just can’t decide whether I’m more scared of migrants or Scots’ to his almost two million followers, receiving widespread retweets. 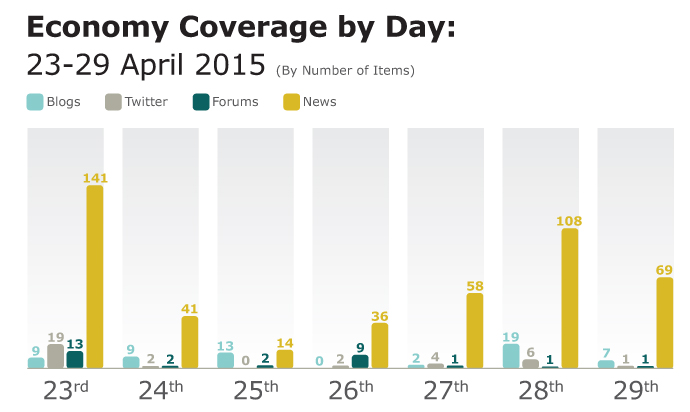 The Conservatives and Labour had the most association with the Economy this week, Plaid Cymru and the Green Party had very low volumes of mentions about this topic. The Institute for Fiscal Studies’ warning that ‘Britain’s main political parties are not giving voters important details of how they would run the public finances after the May 7’ (Reuters, 23 April) was widely reported, as was a Lib Dem warning that ‘A Labour-led government could wipe £10bn off the British economy’.
Although the volume of tweets relating to the election and the economy was low, analysis of a word cloud showing which words featured in Twitter coverage shows that ‘deficit’ was the most dominant, telling us what is on people’s minds. In forums, an active thread on Pistonheads included lively discussion on a range of electoral issues, including discussion of which party is best placed to reduce the deficit.

We used the Ipsos MORI issue groups to create searches using related keywords to interrogate mainstream and social media. We then charted the volumes of mainstream and social media coverage for each issue and created word clouds, which highlight the most frequently occurring words in a debate. Our team of analysts then examined this data to pull out the interesting findings. The searches used include key phrases used by the general public to ensure relevant data is returned – the welfare search for example included terms such as JSA, jobseeker’s allowance, DWP, Department for Work and Pensions and bedroom tax. All coverage also had to mention phrases associated with voting or the election as well as the UK, England, Scotland, Ireland or Wales.