Has it come down to Welfare, Healthcare and Education? Or will Immigration and Europe prove influential at the ballot box?

The latest data from Ipsos MORI shows that the NHS, Immigration and the Economy continue to be the issues people say are the most important facing Britain. Mainstream and social media coverage shows a continued focus on Europe, Immigration and Welfare although Healthcare and Education were also of increasing interest. Mainstream media coverage levelled out in the lead up to election day with titles publishing round-ups of campaigns and preparing for the aftermath. Activity increased however on social media with everyone from Alistair Campbell to RAF veteran Harry Leslie Smith to legions of music fans publishing their opinions on their desired outcome. 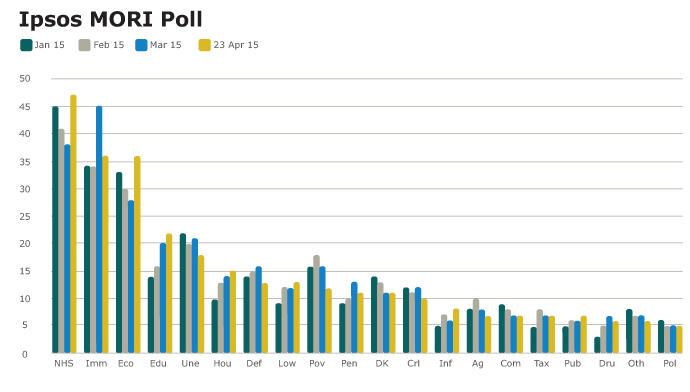 Ipsos MORI published its poll data for the final time before the election, telling us which issues matter most to the electorate. April’s results don’t show much change with the NHS, Immigration and the Economy remaining the top three issues.

Social media coverage saw a sharp increase in coverage since the last round-up while mainstream underwent a small decline. Possibly the mainstream press feels it has made its points, now they are getting ready for the results and aftermath. In the meantime, citizens discuss their views before making their mark in the polling booth.

Poll data was partially reflected in mainstream and social media coverage where Europe, Immigration and Welfare were the top issues, while Healthcare and Education showed the highest increase in coverage. In this last edition of our election tracker we’ll look more closely at Europe, Welfare, Healthcare and Welfare.

We’ve already seen that debates about Europe and Immigration have crossed over a great deal in the last month. Europe has consistently been a lead topic with Labour, the Conservatives, then UKIP most likely to be mentioned in association with the issue in mainstream news. Prominent stories included a Reuters led item which proclaimed, “Britain’s May 7 election, unlikely to return a majority for any party, embeds within it twin threats: to British membership in the European Union or to Scotland remaining within the United Kingdom”.  Meanwhile, an article by the BBC’s Europe Editor, Katya Adler, “EU holds its breath ahead of UK vote”, was shared widely on Twitter.
In social media coverage, UKIP was the most party most linked to Europe, much of this held up by strong levels of activity from UKIP supporters. This past week the discussion focussed around a question put to Nigel Farage by a student on the BBC’s Ask the Leader televised debate. When asked whether UKIP would be ‘redundant’ if the UK votes to stay in the EU in a referendum, the Daily Express tweeted: @Nigel_Farage: UKIP will keep on fighting even if Britain votes to stay in EU http://bit.ly/1GKbsVj . Music fans also became engaged in the debate, retweeting a comment from @twennywunpilots, ‘voting for UKIP will mean that EU bands will have to pay extortionate amounts to tour the UK…if you care about music, don’t vote UKIP’. @twennywunpilots only has 718 followers so 304 retweets for this one post was impressive. 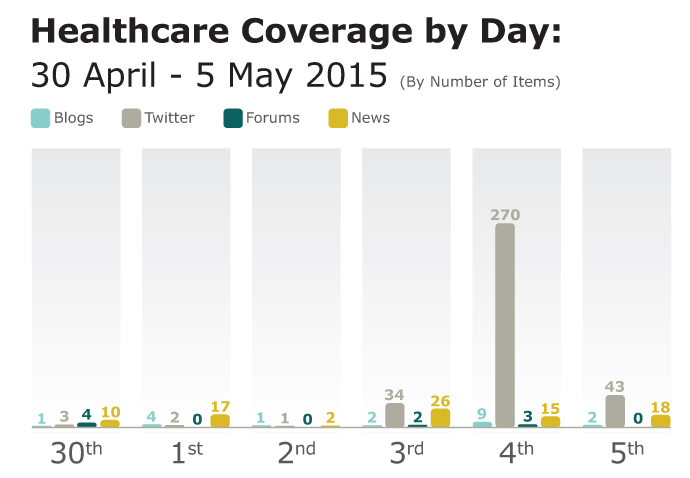 Healthcare saw a significant rise in coverage this week, at last reflecting its position in the polls. Much of this was in relation to social media pickup of an article in The Independent which claimed that Lynton Crosby, who is running the Conservative electoral campaign, is working on a plan to expand the role of private healthcare in the UK.  Alastair Campbell was just one of the influential tweeters to share this story.
The picture in mainstream media was more mixed although a Sky News report detailing the Lib Dem plans to fund investment in the NHS was widely syndicated in regional titles. 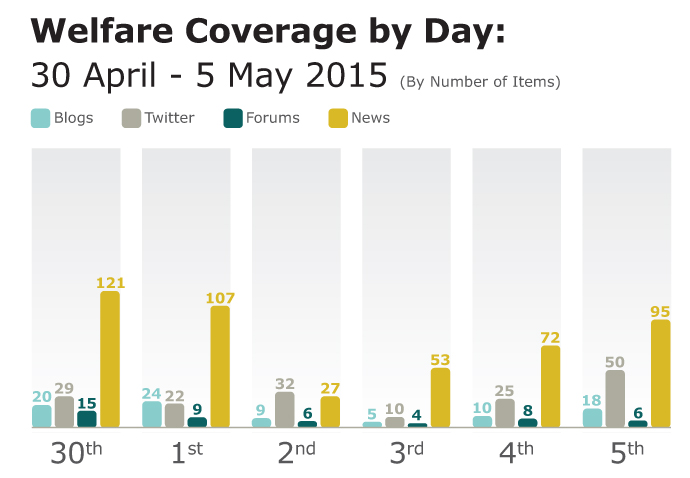 Always a popular topic, coverage of welfare rose further this week. Much of it was in mainstream news rather than social media, often being spoken about in association with other issues. Sky News published some round-ups of the final week’s campaigning, they included a quote from David Cameron warning that borrowing would rise under a minority Labour government propped up by SNP support. Meanwhile, Miliband was said to be focussing on the cost of living during his last minute election tour.

Key Tweets about welfare which travelled included this from @ChukaUmunna, Labour’s Shadow Business Secretary, “Heading to Wirral West. Lets get @MGreenwoodWW elected – an MP who will vote against the Bedroom Tax and for a fairer Britain #VoteLabour”.   RAF veteran, activist and author, Harry Leslie Smith, also tweeted: “#newsnight says election lacklustre perhaps it was how it was covered by press b/c £12bn in welfare budget cuts by tories will destroy UK”. 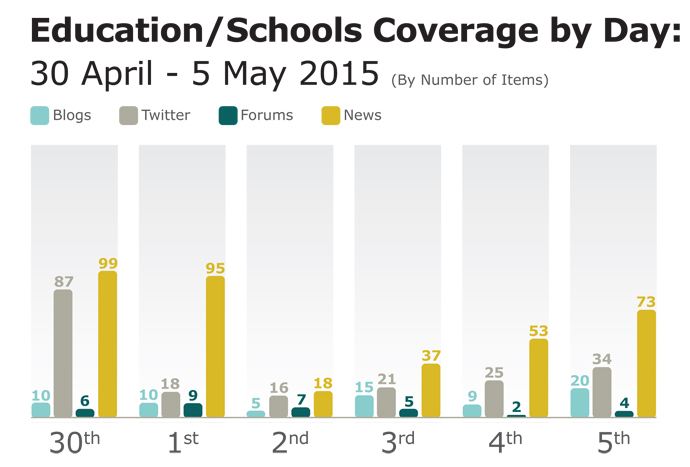 The Conservatives and Labour were most likely to be associated with Education, again we saw some crossover with Welfare coverage. The Press Association referenced a study from the National Association of Head Teachers which warned that ‘Schools are becoming “mini welfare states” spending millions of pounds a year on supporting poor children and plugging funding gaps in public services’. The story was syndicated widely to regional and national titles including Yahoo, Sky and BBC. In social media, John Morgan, politics and policy reporter at the Times Education Supplement, tweeted that a Times Higher Education survey had found that 46% of higher education staff intend to vote Labour and 22% will vote Green.

So that’s it from our election round-up! We now wait to see who will be taking the hot seat at Westminster. Or at least, who will be involved in a period of intense negotiations, closed doors and rumours. We hope you’ve enjoyed it, please get in touch if you think we might be able to help you with your own ‘campaigning’. Happy election day!

Please note: this final batch of media data shows six days of coverage, from 30th April to 5th May only.

We used the Ipsos MORI issue groups to create searches using related keywords to interrogate mainstream and social media. We then charted the volumes of mainstream and social media coverage for each issue and created word clouds, which highlight the most frequently occurring words in a debate. Our team of analysts then examined this data to pull out the interesting findings. The searches used include key phrases used by the general public to ensure relevant data is returned – the welfare search for example included terms such as JSA, jobseeker’s allowance, DWP, Department for Work and Pensions and bedroom tax. All coverage also had to mention phrases associated with voting or the election as well as the UK, England, Scotland, Ireland or Wales.