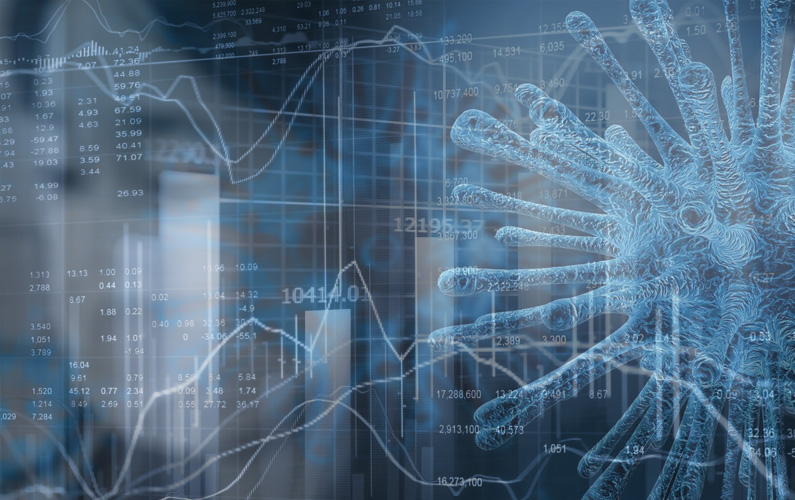 In addition to the healthcare aspects of the coronavirus pandemic, the media has been engrossed in extensive reports and analyses of how the outbreak disrupts the global economy. Most publications point out that we’re witnessing one of the biggest economic shocks in generations, while many commentators believe the world has already entered a recession.

In this regard, financial services providers have often been actively involved in the frenetic media conversation around the coronavirus. With most media outlets having special teams specifically covering the pandemic, the cross-industry expertise of such companies has secured them a crucial role in shaping the debate.

As with any uncertain business climate, the pandemic has led to some communication conundrums for banks and economic consultancies as they should be able to present themselves as competent enough in a situation full of economic puzzles. With this in mind, financial services firms have stepped up their thought leadership strategies.

In order to identify which companies stood out as thought leaders in the media conversation around the pandemic’s economic ramifications, we analysed 3,305 articles published in the top-tier English-language publications in the last 30 days.

We discovered that Goldman Sachs was the most often cited company, followed by economic consultancies Capital Economics and Oxford Economics:

Goldman Sachs was frequently quoted for its views on how the coronavirus will impact the U.S. economy. For instance, at the end of March, the bank was cited for expecting an even sharper contraction in the U.S. economy than it was predicting just a couple of weeks ago, in what would be by far the steepest drop in economic activity on record.

With other estimates seeing an 8% to 15% decline in GDP in the second quarter, Goldman made headlines for foreseeing a record 34% GDP loss, the grimmest prediction yet. The bank also warned that the S&P 500 could bottom at 2,000 by midyear, marking a 41% plunge from the record highs set just a month ago.

Having analysed 27 bear markets since 1880 to put this slump in context, Goldman found that the current downturn differs significantly from past event-driven bear markets as factors unique to the coronavirus threat could drive prices even lower. The firm also made predictions about specific sectors – for example, it said that the “largest economic shock of our lifetimes” will permanently alter energy markets.

Capital Economics was mentioned for expecting the global economy to fall by more than 3% in 2020, a slip which would mark the worst year since the Second World War. The firm also said it could “take years” for the economy to fully recover to its pre-coronavirus state. Moreover, the company predicted that most of the output lost in the first half of this year “will probably be lost forever”.

In addition, the coronavirus crisis has changed conventional economic thinking: Neil Shearing, Capital Economics’ Group Chief Economist, noted that the role of governments is being rethought and that “the spirit of individualism that has prevailed for the past thirty years is being supplanted by a new spirit of collectivism. Public health is, after all, the ultimate public good.”

Oxford Economics was cited for projecting that around 20 million people will lose their jobs in the coming weeks, as the unemployment rate climbs to 12%. The company estimated that the global economy will contract marginally this year, before improving by June – a view is likely to be revised down sharply.

Meanwhile, Bank of America made headlines for saying the global economy already is in a recession because of the pandemic. JPMorgan, on the other hand, said the coronavirus market rout has probably hit bottom already.

Media outlets cited Morgan Stanly for saying some companies like Amazon, Uber, Google and Facebook, will emerge from the pandemic stronger, while others such as Yelp, Quotient Technology, Groupon and Casper, will likely weaken. In the meantime, an analysis by Moody’s Analytics showed nearly 80 million jobs in the US economy are at high or moderate risk.

Thought leadership has been the cornerstone of financial marketing for many years, with the most prominent thought leaders commanding significant market share. The most effective thought leadership supports not just brand building and PR coverage, but genuine business development activity.

However, the main problem with thought leadership strategies is how to evaluate their effectiveness and ascertain if they are moving the needle. At a time of information overload and content saturation, communication professionals need actionable and highly targeted approach to managing their positioning strategies.

For more on this topic, download the 5-page report by Commetric and learn how Influencer Network Analysis can be used to measure the effectiveness of thought leadership.