Consumer Boycotts: How Can PR Deal With the New Era of Activism? 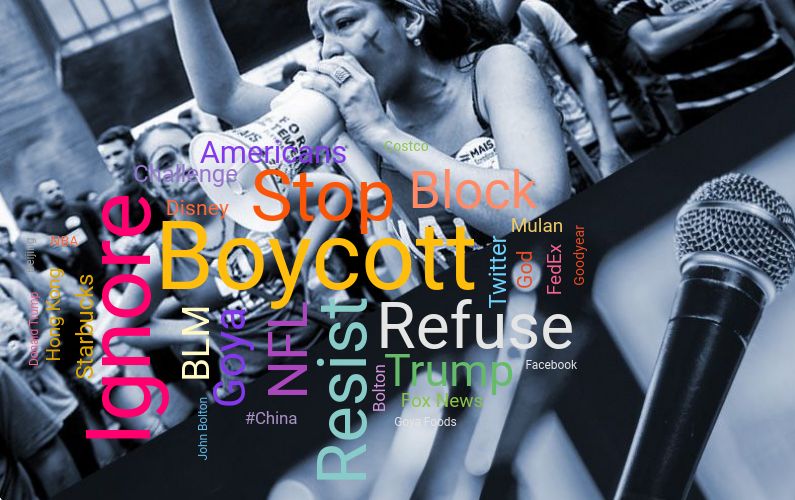 Management researchers have devoted much efforts to understand the motives behind consumer boycotts. The research literature has focused primarily on identifying consumer boycott motivations and studying the consequences of various movements.

But executives are still asking themselves an age-old question: if we set aside all the noise, do boycotts matter that much? This question tends to be asked that often because the criteria by which we could tell whether a boycott has met its goals are quite fuzzy. Although there are some clear-cut cases such as the Montgomery bus boycott in 1955, which resulted in a Supreme Court decision banning segregation on buses, the success of most boycotts has been unclear, especially today, when the largest companies like Amazon or Facebook have become so enmeshed in our lives that it feels impossible to not be entangled with them.

Indeed, boycotts have questionable success rates. There is also little evidence to suggest that boycotts impact revenues of targeted companies. Many critics point out that individual product swaps do nothing to impact legislation and corporate responsibility. For example, Amazon repeatedly manages to smash its sales record despite years of calls to boycott it over its labour conditions.

Another challenge is also the individual cognitive effort that it takes to conform to a campaign, with the participating consumers having to remember a large, potentially changing blacklist of companies, subsidiaries and a diverse array of brands before every purchase – a significant sociotechnical obstacle for the average consumer.

A good example of boycotts’ questionable success (at least when it comes to finances) is the recent Stop Hate for Profit campaign, urging businesses not to advertise on Facebook in July in order to “hit pause on hate”. The accusations against Facebook began gathering steam in the wake of the police killing of George Floyd, which sparked nationwide protests about police brutality and racial justice but also gave rise to hate-induced conspiracy theories and misinformation.

Although some of the world’s biggest brands joined the boycott, including Coca-Cola, Unilever, Verizon, Adidas, Levi Strauss, Ford, Denny’s, Volkswagen and Microsoft, Facebook is unlikely to take a substantial financial hit for one main reason: the bulk of Facebook’s advertising revenue comes from a myriad of small- to medium-sized businesses. The vast majority of these businesses, which account for 76% of all spending on Facebook according to Deutsche Bank, have not signed up to the campaign primarily because they can’t afford not to use Facebook’s cheap and targeted marketing services, especially in a pandemic.

For more on this topic, read our analysis “Stop Hate for Profit: Can Brand Activism Change Facebook for Good?”

Because they don’t have an immediate impact on earnings, and sales declines have a statistically insignificant bearing on whether a boycott was successful, many C-level professionals are inclined to think that boycott movements are mere fads.

In contrast, most consumers think the opposite – that boycotts are effective tools for engendering corporate change:

Because of such perceptions, this type of consumer activism is vitally important for one particular department: public relations. As numerous studies have found, the real power of a boycott lies in its ability to hurt corporate reputation by generating negative media coverage.

Empirical analysis demonstrates that protests are more influential when generating greater media coverage: a study of 133 corporate boycotts conducted by Northwestern University’s Kellogg School of Management found that media coverage of boycotts is detrimental to a company’s reputation and that the stock price of a targeted company dropped by nearly 1% for each day it got national media coverage. Perhaps more importantly, about 25% of boycotts that received national media attention resulted in concessions from the targeted company.

“Boycotts may not need to affect sales at all in order to be effective. Rather, boycotters’ influence stems from their ability to make negative claims about the corporation that generate negative public perceptions of the corporation. Hence, corporations that are already struggling to maintain their previously positive reputations will be more likely to concede to boycotts and quell any further damage the boycott may do to their reputation.”

As we found, the Twitter discussion consists of peaks of passionate calls for a boycott of something that are soon replaced by calls of boycotts of something else, just as #BoycottStarbucks was swiftly replaced by #BoycottGoya. However, what’s important for PR professionals is to study the mechanics of these movements in order to design a good boycott response strategy.

Drawing from the research literature, consumer boycott motivations can be classified into instrumental (where the activists’ goals are explicitly stated, e.g. to influence the actions and policies of the target company) vs. noninstrumental or expressive (where the goals are vaguer and consumer express a desire for social change in more general terms). The research literature has found that although consumer boycott messages are more commonly motivated by instrumental motives, noninstrumental motives have higher emotional intensity.

However, the boycotts we studied, especially those on social media, had noninstrumental or expressive motivations, as consumers were often driven to engage in activism by psychological needs rather than concrete outcome-focused goals – their calls for boycotts were expressions of political views and ethical values rather than specific demands.

Users from both sides of the political aisle used boycotts to express their beliefs by generally protesting the actions of the boycott target, venting their frustrations. For example, the #BoycottGoya movement was amplified by critics of Trump who expressed general political positions rather than advancing explicitly stated demands for the brand.

In a similar manner, #BoycottStarbucks was orchestrated by users eager to express their support for the Black Lives Matter movement, while #BoycottMulan united users with strong feelings against police brutality. In these cases, consumers didn’t expect a clearly defined outcome from their boycott (like the target company to stop selling a certain product).

Recent studies in social psychology have also demonstrated individuals use expressive boycotts to increase their self-esteem by conveying a feeling of moral superiority. As such, the rising number of boycotts in the US is another consequence of the deepening polarisation among social media users, for whom consumer activism is an effective means of self-expression and self-realisation.

So even if their firms aren’t the target of a  boycott, PR practitioners should regularly monitor traditional and social media to be aware of the latest political and social issues that might trigger consumers. Scoping the broad marketing environment (demographic, economic, cultural, natural, technological) could serve as the basis for identifying potential activism threats. It’s vital to understand the drivers of boycott calls in order to take appropriate countermeasures.

As the most severe social media crises happen because of outrage cascades, PR professionals should carefully approach topics that are typically polarising. At the start of each campaign, PR execs should be asking themselves questions like: “Is my campaign touching upon a socially sensitive issue? If so, is the company’s overall messaging and actions in line with that position?” Consistency is key – remember how Starbucks faced calls for a boycott because its actions were at odds with its position on a sensitive issue.

In general, apologies tend to trigger negative reactions from both the liberal- and conservative-minded users who play the most active parts in social media discussions. Liberal users usually think brands are being insincere, while conservatives typically say that the sensitivity around these issues has gone too far.

PR pros should take into account social media’s shift in power from formal to informal communications, the growing influence of stakeholders and the fact that outbursts of moral judgment often drive the conversation around brands, their products and their corporate messages.

Reputational risks could easily be mitigated if brands outsource their messaging to key opinion leaders who can generate organic audience engagement within a social media network or around a certain topic. This is especially true for brands trying to enter a demographic whose idiosyncrasies and sensibilities are still unknown to them..

As conveying corporate messages in the right way is becoming more and more challenging in today’s increasingly hyper-connected engagement-driven economy, brands should rely more on key opinion leaders to navigate discussions. This would also help create strong customer relationships that facilitate the communication between brand and consumer.

In line with the popularity of conscious consumerism, a recent research by Weber Shandwick uncovered a striking trend: BUYcotts are on the rise and appear to be gaining momentum to overtake the prevalence of boycotts, with 83% of consumer activists agreeing that it is more important than ever to show support for companies by buying from them vs. participating in
boycotts (59%).

However, our media research showed that boycotts make headlines much more often than BUYcotts, so to counter any potential or existing boycotts, brands need to make BUYcotts into good headline-grabbing stories that would excite consumer as much as or even more than boycotts.

An interesting recent research finding is that companies that directly rebut any negative claims about themselves are not only ineffective in diminishing negative associations, but actually exacerbate the problem: the mere reference to the backlash reminds consumers of it. However, conveying unrelated positive information about the target company reduces the likelihood of boycotts and mitigates any negative brand associations.

In this regard, another strategic communications effort would be building brand trust by making more proactive investments in CSR initiatives and thereby creating a halo effect – a bank of goodwill which will come in handy in a time of crisis. It’s important to add that these efforts should be consistent and not a one-time trick to weather a storm, otherwise they could be viewed as hypocritical.

After all, the best crisis management is the one that doesn’t look like crisis management at all but rather as a natural continuation of the company’s overall messaging. Since consumer commitment to a brand negatively influences consumer intention to participate in a boycott, PR departments should invest in brand image campaigns that make consumers feel passionate about their brands. It seems that a strong brand image is the most effective shield against boycott calls.