Trump Is a Liar, Biden Is a Marxist: The US Election Through a Twitter Lens 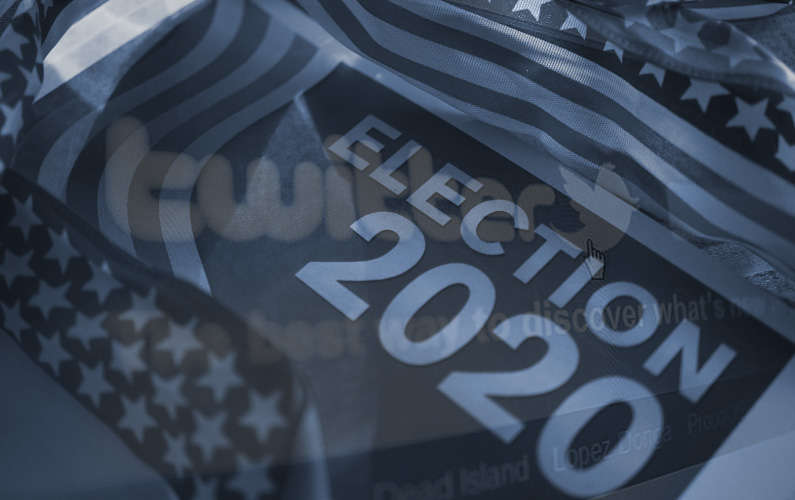 With the US election around the corner, we decided to analyse the conversation on Twitter – the social media platform which plays an important role in shaping political discourse in the US and is instrumental in how politicians, media outlets and citizens engage with political issues.

Our results indicated that Biden supporters were more active on Twitter. This corroborates Pew Research Center’s finding that tweets from users who strongly disapprove of Trump are especially prominent in political discussions: this group generates 80% of all tweets from US adults and 72% of tweets mentioning national politics.

This could be explained by the supposition that most Twitter users are generally young people with liberal inclinations, whereas the majority of Republican voters are over 50 and not so active on social media.

Perhaps unsurprisingly, we found that most of the conversation consisted of users trying to discredit the other side and making ad hominem attacks against the opposing candidate.

We gathered 180 000 tweets posted by both Biden and Trump supporters between 1 Jul-18 Oct. In the first stage of our analysis, we used LDA, a statistical natural language processing (NLP) technique, to automatically generate topics in our Twitter data. In the second stage, we did a qualitative analysis of the topics to extract key insights from the textual dataset.

The topic with the largest share of voice in the Biden data set was Trump’s lies – the message of most Biden supporters was that Trump deceives the American people and propagates misinformation.

That topic was boosted by the Twitter account @Truth, which aimed to fact-check President Trump during the presidential debate. The handle was created by Biden and the DNC War Room, a Democratic “rapid response unit made up of dozens of research, communications, and mobilization experts entirely dedicated to kicking Trump out of the Oval Office in 2020”.

The narrative that Trump is a liar aligns with Biden’s positioning as the candidate who tells the truth. When asked about his strategy to debate Trump, he said: “Just tell the truth.”

The high share of voice of the Covid deaths topic was due to the fact that the number of US citizens who died during the pandemic was used as a key argument against Trump. Users claimed that Trump killed more than 200 000 people by lying about Covid and extensively shared tweets like “200,000 Covid 19 deaths 200 000 reasons to vote against Trump”.

A closely related topic was Face masks, with Biden supporters alleging that Trump is questioning the efficacy of masks and is endangering the lives of his “MAGA crowd” by promoting no masks be worn at his rallies.

As the killing of George Floyd sparked outrage against police brutality among blue voters, Police violence and Black Lives Matter emerged as a key concern for Biden supporters, many of whom referred to Republicans as “white supremacists” or “violent far-right extremists”.

Users were also discussing the issue of qualified immunity, a judicially created doctrine that shields government officials from being held personally liable for constitutional violations so long as the officials did not violate “clearly established” law. Some Biden supporters felt that qualified immunity means the police can use “Gestapo tactics on private citizens”.

Many also shared their disapproval of Amy Coney Barrett’s confirmation to US Supreme Court, complaining that the appointment is being rushed through in order to make the court more conservative. Some claimed that Senate Republicans were working on pushing “an unqualified extremist Judge to our Supreme Court.” A similar level of backlash was generated by Trump’s taxes when it emerged that the President paid $750 in federal income taxes in 2017.

Trump was further vilified within the Diversity and inclusion topic, where users claimed he is racist and sexist, reviving allegations that surfaced in 2016. Some of the harshest accusations were that the Republican party wants women to be silenced and controlled, people who are not white to be enslaved again and anybody who is gay to be taken away from society.

As ever, Obamacare was also a hot topic, with many claiming that Trump is actively working to strip away Americans’ healthcare. However, Trump’s ties with Russia didn’t generate as much traction as in 2016 – the main concern within that topic was whether Senate Majority Leader Mitch McConnell is a Russian asset, with users referring to him as #MoscowMitch.

Police violence and Black Lives Matter turned out to be a key concern for Trump supporters too – as expected, they had quite different views on the matter.

Trump supporters shared passionate disapproval of the Black Lives Matter movement and the protests following George Floyd’s killing, calling them violent riots organised by anarchists and vandals. For them, looting, arson and rage were always the first reactions of the “#FilthyLeftiss and their enablers”.

Users often used hashtags such as #AllLivesMatter, #BLMisDestroyingAmerica, #BLMTerrorists #BLMDomesticTerrorists, #blmjail, and #boughtbysoros and also spoke against the Defund the Police movement, although that movement didn’t generate traction among Biden supporters.

Many felt that the police is under attack and portrayed Trump as someone who can guarantee law and order. As such, the election was often framed as a choice between violent riots and “church, work, and school”.

Face masks was another common ground for both Biden and Trump supporters, with the latter claiming that masks are ineffective or even harmful. Some of the top hashtags here included#MasksDontWork #MasksMakeYouSick,

In addition,#NEVERtakingVaccine was also a very popular hashtag in the discussion, as the anti-vaccination movement has reached new peaks. It has tailored some old claims about vaccine safety to fit the current outbreak and has joined forces with movements protesting the lockdown measures. Some of the most popular hoaxes speculated that the coronavirus was manufactured so that investors in vaccine research and development could profit.

Trump supporters also tweeted about Plandemic, a conspiracy theory video starring discredited former medical researcher and prominent anti-vaccine activist Judy Mikovits, who suggests that, among other things, vaccines are “a money-making enterprise that causes medical harm”, the virus was manufactured and that “if you’ve ever had a flu vaccine, you were injected with coronaviruses”.

Meanwhile, Taxes were hailed as one of the advantages of Trump’s administration, with users claiming that Democrats want higher taxes and Biden promises to raise taxes on Americans making more than $400,000 per year. Some tweeted that the solution to the US economic situation is, and always has been, lower taxes, fewer fees and fewer government regulations, while others called for ending the federal income tax and with it the IRS.

China became a hot topic for red voters since the US national security adviser, Robert O’Brien, said the country has taken the most active role among countries seeking to interfere in the US election and has the biggest program to influence domestic politics. As a consequence, Trump portrayed himself as a victim of election meddling from Beijing.

Kamala Harris was attacked for being “farther left and socialist than Bernie Sanders” and for falsely accusing Trump of never saying that Black Lives Matter. Users also claimed that Harris is racist because she once even bragged about locking up black men for marijuana and because her ancestors were slave owners.

The narrative presenting Democrats as Marxists also proved to be popular, with many tweeting that the Constitution is being replaced with the Marxist Manifesto. At the same time, Democrats were blamed for their focus on Diversity and inclusion and were portrayed as a party that “supports race over character, illegals over our own citizens, criminals over our own veterans, cancel culture over free speech”.

The state of Schools during the pandemic also emerged as an issue where Trump was praised, especially after he tweeted that virtual learning has proven to be “terrible” compared to in school, or on campus, learning. His push to get schools reopened in the fall was taken by many as a sign that the coronavirus is not that serious and the measures do nothing but impede everyday life.