Fitness Tech: How Brands Capitalised on Home Workouts During Covid 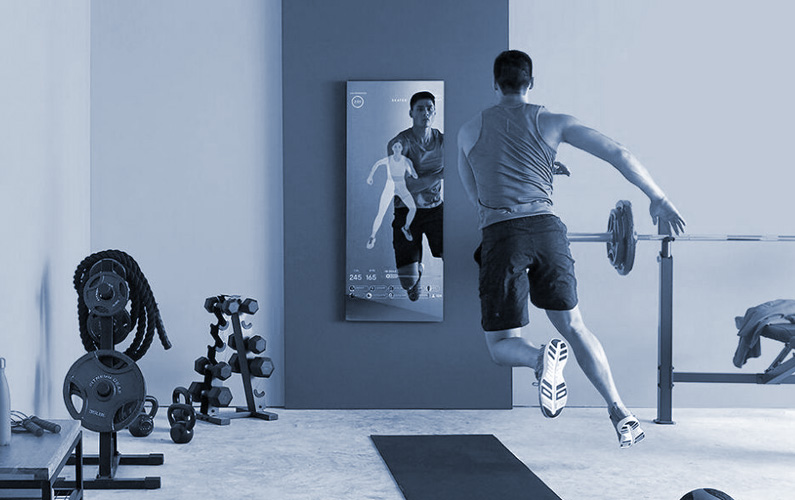 Like many tech-powered industry niches, the fitness technology sector has been a rare winner during the coronavirus pandemic. While gyms were forced to close for months, people who committed to stay in shape during the quarantine caused an explosion in fitness tech solutions ranging from apps to wearables and connected devices.

Staying-at-home policies made fitness streaming services and apps especially popular. Health and fitness apps saw a 67% jump in global installs in late March and early April from a year earlier. And while only 7% of surveyed Mindbody users used fitness streaming services on a weekly basis in 2019, that figure had grown to more than 80% by April 2020.

In addition, sales of home fitness equipment like exercise bikes, treadmills and rowing machines grew by 170% during the crisis, with demand being particularly high for smart exercise equipment. Many connected fitness equipment brands are also successfully approximating the social and competitive aspects of working out in gyms, helping users who want to recreate the gym experience at home.

Meanwhile, wearable brands have been investing not only in individualised performance tracking but also in community-driven engagement based on a subscription model. Amid all the media buzz around everything related to Artificial Intelligence, Big Data or the Internet of Things, the booming wearable technologies market was constantly under the radar of the daily press. And as with every conversation around consumer electronics, “smart” and “connected” have been the watchwords during the pandemic.

Technology outlets overflew with articles on wearable devices, business publications speak about upcoming market disruptions and investment opportunities, while the mass media foretells that automation will change our lives fundamentally even after the pandemic. Reporters often let their imagination fly and paint futuristic pictures about devices which are usually described as revolutionary or pivotal. Some publications even herald a new era in the history of homo sapiens engendered by wearable tech innovations.

In order to see which companies shaped the media conversation around fitness tech, we analysed 829 English-language articles published in top-tier publications throughout 2020.

We found that the discussion was populated by three types of companies: tech giants like Apple and Amazon, fashion brands like Nike, Adidas and Under Armour, and specialised fitness tech firms like Fitbit, Peleton and Garmin.

Not surprisingly, Apple and Amazon were the most influential brands in the discussion:

As these tech giants are frequently in the media’s eye, it was only natural that their investments in a new niche sphere received attention by many mainstream outlets.

Apple doubled down with the fitness features of its Apple Watch and launched a new subscription-based service called ‘Fitness+’, offering an “immersive” workout experience and a range of fitness classes which can be viewed on an iPhone, iPad or Apple TV. The company positioned it as a new kind of fitness experience that dynamically integrates personal metrics from Apple Watch, along with music from consumers’ favourite artists.

Commentators noted that Apple’s new fitness subscription service will be a direct challenge to the likes of Fitbit, whose eponymous fitness trackers helped ignite the wearables trend, and Peloton, whose main products include a stationary bicycle and treadmill that allow monthly subscribers to remotely participate in classes that are streamed from the company’s fitness studio.

Both Fitbit and Peloton have had success with their own subscription models, which offer classes and other features to those who sign up. But as some analysts remarked, Apple would create a serious competitor for those firms, given the iPhone maker’s dominance of the wearables market.

As we found in our recent analysis of the media discussion around wearables, journalists were eager to note that the company’s wearables and accessories products, including its Apple Watch and its AirPods, accounted for nearly as much revenue as its Mac computers, and it seems like they are on their way to becoming the second-largest line of products after the iPhone, whose sales sag.

Some commentators remarked that even though the Apple story has been tied to services for the last couple of years, the main attention could soon be shifted to the company’s wearables business. The tech giant’s rather surprisingly positive performance in this sphere generated a string of headlines such as: “Apple’s wearable business is so hot that it now generates more revenue than Netflix“, “Apple’s Wearables Could Be a $100 Billion Business, Analyst Says” and “Apple put an iPhone in everybody’s pocket — now its growth depends on putting devices all over our bodies“. The media also reacted positively on its move to concentrate on specialist health tech, such as sensors which turn a smartwatch into an electrocardiogram.

As this vertical becomes an increasingly important part of its business, Apple pushed more aggressively into health and fitness by launching a new program called Apple Watch Connected, in which gyms will offer incentives for tracking workouts with the Apple Watch. Furthermore, the company’s purchase of Intel’s 5G modem business led to speculations that this newly acquired capability could be used in its future wearable tech.

For more on this topic, read our analysis “Wearable Technology: The First Steps Towards Transhumanism?”

Meanwhile, Amazon was mentioned for introducing its very first piece of connected fitness equipment, the Prime Bike, made in partnership with Echelon, a manufacturer of connected exercise gear. The new product offers users a stationary bike to which you can connect your mobile device and tap into Echelon’s on-demand workout classes and programs. Priced at $500, it was perceived by many as nearly a clone of Peloton’s $1,900 product.

The move was widely covered as Amazon’s first foray into the smart bike market and caused shares of exercise bike maker Peloton to fall. However, the media narrative quicky shifted after Amazon denied it was involved in a partnership with Echelon or the Prime bike and told Echelon to stop selling the Prime bike and change its branding.

“This bike is not an Amazon product or related to Amazon Prime,” an Amazon spokesperson told CNBC. “Echelon does not have a formal partnership with Amazon. We are working with Echelon to clarify this in its communications, stop the sale of the product and change the product branding.”

But because there was the fear Amazon could undermine Peloton‘s push for its own lower-cost stationary bikes, Peloton started launching cheaper options and targeted a new mid-tier level of connected fitness devices alongside its revamped product lineup targeting its typical high-end customer. However, some commentators noted that Nautilus, which has been trying to take the low end of the market for connected fitness products, could have more to lose by the introduction of the Prime Bike.

The media discussion around the relevant companies is presented as a two-mode network map (see below), displaying the major companies (circles) and the publications (squares) that referenced the firms in the coverage. The size of the circles indicates the firms’ prominence in the media discussion, and the width of the connections between the firms and the publications is indicative of the coverage volume.

In this case, we presented the three most influential companies in red, the mid-tier companies in purple, and the ones with more modest influence in yellow.

We can see that Apple and Amazon were the focus of major daily publications like the New York Times and Washington Post, while business outlets like Forbes and Business Insider featured start-ups like Hydrow, which offers immersive at-home rowing machines, and Tonal, which uses digital weight, machine learning, and expert coaching to deliver a smart home workout experience.

Sports equipment manufacturers Nike, Adidas and Under Armor also got involved in the discussion, with Nike becoming the third most influential brand. Journalists noted that while stores were closed, Nike managed to capitalise on its online operations effectively and activated other digital ways of connecting with customers, such as home fitness apps offered for free, which in turn drove consumers to purchase new workout gear.

Like Nike, a large chunk of Under Armour‘s new demand is coming from its website and app, which pushed its direct-to-consumer business up 17%, while Adidas made a strategic shift to a more focused online presence to cope with falling sales.

But according to some publications such as The Guardian, fitness apps became the new religion during quarantine, as many people chose running outside as their workout routine. In our analysis, the most influential app was Strava, which offers training data and motivation to millions of runners. The app experienced explosive popularity during lockdown periods, reporting 2m registrations per month.

Fitbit‘s coverage in financial publications was due to its $2.1bn acquisition by Google. There was a major media discussion around the question whether the deal was going to be approved, as regulators had some privacy concerns, but after it went through, commentators started focusing on how Google will go head to head with Apple in the wearables space.

In other M&A news, Peloton‘s deal to buy Precor, one of the world’s largest commercial fitness equipment suppliers, was viewed very positively as Precor‘s relationships with gyms would help Peloton expand its reach to these sectors as they recover after the pandemic. In the meantime, athletic apparel retailer Lululemon bought Mirror, a startup that sells high-tech mirrors for streaming workout classes at home, for $500 million.

Some companies were mentioned for blending all the trends: Ring Fit Adventure, a Nintendo game that allows players to physically exercise using a purpose-built controller to stay fit while defeating monsters, proved so popular that it went out of stock in some countries under lockdown.

Our social media analysis around the fitness tech trend found that the majority of the top influencers in the Twitter discussion came from the business world, and they’ve mostly been tweeting news and opinions on the latest fitness tech developments:

The most influential Twitter user was Dr. Ted Vickey, CEO of FitWell, a fitness technology management consulting company, and a former executive director of the White House Athletic Center. His thoughts on general topics like the wireless future of wellness and more specific issues like the Google/Fitbit deal made him particularly prominent in the fitness tech community on social media.

Some entrepreneurs and investors tweeting about fitness tech developments, such as Shervin Kordary Pishevar and Jonah Lupton, gained their influence by offering market insights. Antonio Grasso, who tweets about many tech-related topics, secured his place in the discussion by posting graphs and charts about the latest trends.

Other professionals gained their prominence through other channels: for instance, Joe Vennare, advisor at a venture fund investing in early-stage sports, fitness and gaming companies, hosts a podcast on the business of fitness and wellness.

Not all influencers came from the business world: for example, Stephen Yang is an assistant professor in SUNY Oswego’s Department of Health Promotion & Wellness, while Jillian Michaels is a fitness expert and life coach who launched an app for personalised workouts and meal plans.

Needless to say, mapping the social media discussion is a communications imperative for brands investing in fitness tech. Here’s what the growth of this trend also means for different players:

Learn more about how Commetric’s Influencer Network Analysis can help you identify and engage the influencers and stakeholders that have the highest impact in your market.