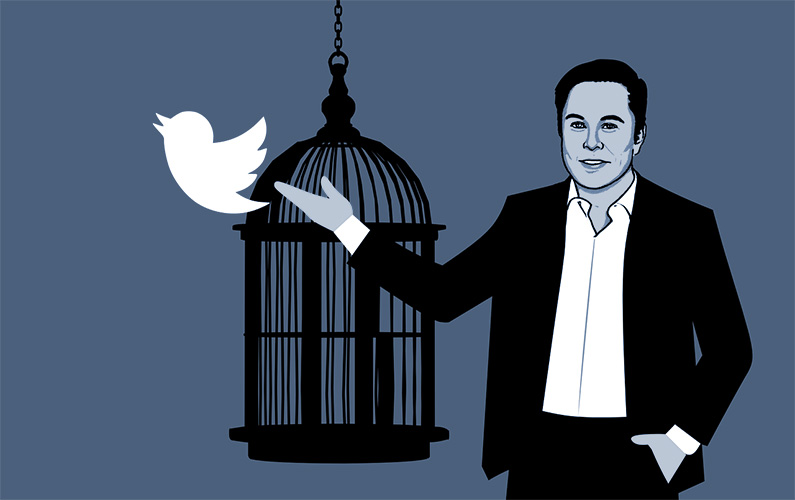 Elon Musk might be considered a genius in a lot of things, from engineering and neurotechnology to business and investing. But when it comes to constantly being the centre of attention, he has no rivals. This week, he made the whole world talk about him again when his $44bn deal to buy Twitter elicited cheers, concern and lots of questions for the future.

Musk, who has described himself as a “free speech absolutist”, reached a deal with the company in a takeover that will eventually give him control of the social network, which has more than 200 million users. The Tesla chief executive is a longtime, highly active, and at times controversial user of the platform, where he has 83m followers.

While it still remains unclear where Musk wants to take the company, he offered glimpses into his plans: his proposals include relaxing content restrictions, combatting fake and automated accounts, and shifting away from an advertising-based revenue model.

Critics and supporters were quick to weigh in on what could lie ahead. Some conservative commentators hailed the deal, calling it a “win for free speech”, while free speech and rights advocates warned of the potential consequences of changes in Twitter’s moderation policies, urging Musk to prevent the platform from becoming a petri dish for hate speech.

To find out who were the most vocal commentators in the media debate around the Twitter deal, we analysed 784 articles published in top-tier outlets in the last month.

We found that Parag Agrawal, Twitter’s CEO, emerged as the most influential commentator by media influence score calculated in terms of coverage by high-profile media outlets.

Parag Agrawal was widely cited as saying Twitter’s future under Musk was unclear. “Once the deal closes, we don’t know which direction the platform will go,” he said. Meanwhile, former Twitter CEO Jack Dorsey weighed in on the deal with a series of tweets that thanked both Musk and current Twitter CEO Parag Agrawal for “getting the company out of an impossible situation.” He said that Twitter as a company has always been his sole issue and his biggest regret because it has been owned by Wall Street and the ad model. “Taking it back from Wall Street is the correct first step,” he said.

The most influential commentator outside of Twitter was Dan Ives, managing director at investment firm Wedbush Securities, who was quoted as predicting that the Twitter board’s move would “not be viewed positively by shareholders” given both the potential dilution of stock and the signal it sends of hostility toward being bought. He foresaw a “likely” court challenge.

And a court challenge came indeed. In a complaint with the U.S. District Court for the Southern District of New York, Twitter shareholder Marc Bain Rasella claimed that Musk’s delay in making the required disclosure within 10 days of acquiring a 5% stake in Twitter allowed him to buy more shares at a lower price than he would have otherwise, raising his shareholdings to 9.1%, and cheating shareholders who sold in the interim.

Howard Fischer, a former SEC counsel and a partner at law firm Moses & Singer, expressed a similar sentiment, saying that Musk’s social media posts about potential alternatives to Twitter can be seen, in light of his previously undisclosed stake, as a form of market manipulation to affect the share price: “The fact that the revelation of his stake caused a price rise that resulted in Musk’s stake increasing in value is something that the SEC might look into.”

But this step in the process isn’t likely to cause any obstacles to the deal, said Angelo Zino, a tech analyst at CFRA, who added that Musk is going to do what he wants with Twitter and he’s probably going to look to make significant changes to the business model of the company.

Other analysts were also more positive. For example, Brent Thill, an analyst at investment bank Jefferies, was quoted as saying that Musk’s technology skills and strong “feel” for products — along with the sheer dynamism that has been a characteristic of his own companies — could make him a catalyst for change.

The most influential celebrity businessman in the debate was Jeff Bezos, who suggested converting at least a portion of Twitter’s headquarters, if not all of it, into a homeless shelter – just like the Amazon’s eight-floor family homeless shelter attached to its Seattle headquarters. Musk called the suggestion a “Great idea.”

Taking a more direct approach than the White House, Senator Elizabeth Warren, a progressive and a critic of the tech platforms, called the deal “dangerous for our democracy”, adding that Billionaires like Elon Musk play by a different set of rules than everyone else, accumulating power for their own gain.

New York Times contributor Kara Swisher noted that Musk’s previous 9.1% Twitter stock purchase already put the company “under leverage” over whether to allow former President Trump to rejoin the platform. “You know, without Elon Musk, they have to think about if he runs for president and if he wins whether they can let him back on it, but they are under enormous pressure to do so,” Swisher said.

Scott Galloway, a professor of marketing at NYU’s Stern School of Business, was cited as declaring that Elon Musk is now the most influential individual in the world – so influential, he can distort the modern world’s premier platform, our free market system. Galloway also noted that our idolatry of innovators and the algorithmic media ecosystem have distorted the allocation platform. In the spectacle economy, it’s about the show, the now, the short-term hit.

Analysing 22.8k tweets posted in the past 7 days, we found that the Twitter discussion around the deal was strongly politicised, with rightwing and leftwing commentators sharing their views on free speech and censorship.

Some of the tweets with the highest engagement came from political figures. For example, Republican Senator Marsha Blackburn celebrated news of the purchase, tweeting that she’s hopeful that Elon Musk will help rein in Big Tech’s history of censoring users that have a different viewpoint.

Republican Senator Ted Cruz offered a poll to his Twitter followers. “Is Elon Musk buying Twitter a good thing?” he asked. The two answers offered: “Yes” or “No, I hate free speech.” Republican Texas Gov. Greg Abbott also appeared to back Musk’s purchase, asking him to move the company’s headquarters to the state.

On the other side of the aisle, Democratic Senator Dick Durbin said Musk’s purchase of Twitter “absolutely” gives him concern due to the possibility to reintroduce Donald Trump to the platform. Former United States Secretary of Labour Robert Reich tweeted that when multi-billionaires take control of our most vital platforms for communication, it’s not a win for free speech – it’s a win for oligarchy.

And Angelo Carusone, the president of the nonprofit media watchdog group Media Matters for America, warned Musk would “open the flood gates of hate and lies”, using Twitter “as a cudgel against other social media companies to press them to backslide”.

The focus on free speech put the name of Alex Jones, a prominent conspiracy theorist banned from Twitter, among the top keywords in the discussion.

The right-wing conspiracy theorist’s account, and that of his Infowars website, were suspended in 2018 due to violations of the platform’s abusive behaviour policy. The two accounts had about 1.3 million followers combined.

And now Alex Jones became trending as many Twitter users suggested Musk’s ownership will mean that the conspiracy theorist will be back on the platform since Musk stated that “free speech is the bedrock of a functioning democracy”.

One of the top-trending tweets in the whole discussion was a parody video of Elon Musk and a Twitter employee reinstating Alex Jones’s account live on Joe Rogan’s podcast:

Comedian and podcaster Joe Rogan was also trending as he hailed Musk as a “superhero” advocate for free speech. The buyout perhaps hits particularly close to home for Rogan, who has been the target of an ongoing cancellation campaign that started over a New Year’s Eve “JRE” episode featuring alleged anti-vaxxer Dr. Robert Malone. In it, Malone had compared the current US public health climate to Germany in the 1920s and 1930s, when the Nazis rose to power.

Political retribution and outright gangsterism were also among the keywords in the debate as many users discussed how before Musk and Twitter got to a deal, House Republicans threatened the company’s board with political retribution. They referred to a group of 18 House Republicans that is asking Twitter’s board to preserve all records related to Elon Musk’s offer to buy the company, setting up a potential congressional probe should the party win back the majority this fall.

Some Twitter users warned that beneath the lofty rhetoric, Musk has a troubling record of stifling speech he doesn’t like: Tesla has pressured laid-off employees to sign non-disparagement agreements with no end dates and arbitration clauses that impede them from taking the company to court. Others remarked that Musk himself also has a pattern of trying to control what journalists, commentators and even customers say about him and his businesses.

The political divide among Twitter users was also evident by some of the most often used hashtags in the conversation:

Some users took the chance to talk about dogecoin, a cryptocurrency created by software engineers Billy Markus and Jackson Palmer, who decided to create a payment system as a “joke”, making fun of the wild speculation in cryptocurrencies at the time.

Elon Musk frequently uses his Twitter platform to express his views on Dogecoin, which has led some to claim that his actions amount to market manipulation because the price of Dogecoin frequently experiences price movements shortly after Dogecoin-related tweets released by Musk. The Tesla CEO and his promotion of Dogecoin have been criticised by Dogecoin co-founder Jackson Palmer, who called Musk a “self-absorbed grifter”.

Others mentioned Truth Social, a social media platform created by Trump Media & Technology Group, an American media and technology company founded in October 2021 by the former U.S. president. There were many users who tweeted that Twitter will now become a right-wing platform just like Truth Social. And Trump, who had more than 88 million followers when he was banned, said he does not intend to return to Twitter, sticking with Truth Social.

Based on our analysis, here are the three possible ways this deal could affect Twitter: