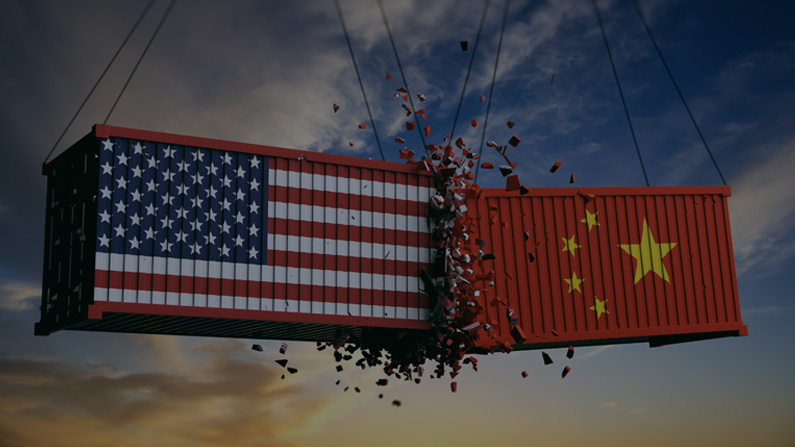 As with the Brexit quandary, the economic turbulence surrounding the US-China trade skirmish presents an opportunity for many corporates to boost their brand presence in the media by establishing themselves as thought leaders. When reporting on the trade tensions between the two largest economies, journalists naturally reach out to quantitative analyses and expert studies, and this is an excellent chance for financial services firms to get their name tossed around and to promote their capabilities.

To determine who managed to seize the opportunity, we went over the voluminous media coverage of the conflict and identified the companies with the lion’s share of voice.

Studies by UK consultancy Oxford Economics often get mentioned in The Financial Times, The New York Times, The Washington Post, the BBC and other high-profile outlets. In the case of the US-China showdown, their brand appeared in some of the top trending stories, which quoted their estimate that global growth could be cut by 0.4% if the dispute deepens, costing hundreds of billions of pounds off the value of the world economy.

The consultancy also put its predictions in a historical context: “The current trade dispute risks worsening the ‘creeping protectionism’ trend visible since the 1990s. Lack of trade liberalisation has been especially notable among the advanced economies, where tariff levels remain stuck at early 2000s levels and both the US and EU impose significant non-tariff barriers.”

It also reminded that the negative effects protectionism characteristic of the period between 1929 and 1932, in which the Great Depression began to bite, were felt until the 1960s, when the ratio of world trade to world GDP was only modestly higher than the lows of 1929.

The decline in global trade was aggravated by attempts to support individual national economies by implementing protectionist measures, such as the 1930 U.S. Smoot–Hawley Tariff Act, which increased the amount of US tariffs on over 20,000 imported products. If these patterns repeat themselves, emerging markets will likely take the hardest hit, because they often rely on commodity exports.

The combination of storytelling and quantitative analysis proved particularly appealing to journalists, and helped expand the brand presence of Oxford Economics. Some specialist publications like Business Insider did stand-alone stories on their opinions and predictions, while national outlets like the BBC devoted separate columns to the consultancy’s comments as part of trade war reports.

Other often cited consultancies included Washington, DC-based Peterson Institute for International Economics and London-based Capital Economics. The Peterson Institute has a special section themed “protectionism” on their website, where they published an interactive up-to-date trade war timeline, which was used by publications such as Bloomberg. The Institute’s scholars have written essays and articles for Foreign Affairs, and Foreign Policy, Wall Street Journal, Financial Times and other publications of that caliber. Capital Economics also publishes expert views and gives interviews, especially on the tariffs on soybeans, which could hurt farm states such as Iowa which endorse Trump.

Apart from economic consultancies, banks are the other type of institutions which are particularly active when it comes to thought leadership in the trade war. Most of them have tried to quantify just how much damage an intensified trade conflict could inflict on the world economy, but their communication strategies when issuing the numbers have been different.

Wall Street giant JP Morgan comes on top of its peers. Some of the top trending trade war stories gravitate around the warning by JPMorgan Chase International’s chairman Jacob Frenkel that such a dispute is extremely dangerous for the global economy and that protectionism is a major risk.

The bank’s head of cross-asset fundamental strategy John Normand was also figuring in many reports for saying that a worst-case scenario of a full-blown trade war could cut global growth by a “material” amount of at least 1.4 percent over two years because of reduced trade volume, supply chain disruptions, and lost confidence.

“Our economists acknowledge that such frameworks underestimate the likely damage that comes through disrupted supply chains, plus the feedback loops from tighter financial conditions,” Normand said. “Policy uncertainty has a habit of denting consumer and business confidence, which in turn lowers household and corporate spending. The team’s proprietary, composite measure of developed market business sentiment already shows such a drop, but from above-average levels due to U.S. tax stimulus.”

Meanwhile, the most popular trade war story which includes commentary by Dutch bank ING is a tad different from the prevailing tone of the rest of the stories with quotes from the financial industry. Raoul Leering, head of the bank’s international trade analysis, said that there’s a chance Trump is playing a “smart, strategic game” on trade and his Chinese trade gamble could pay off.

The aggressive strategy could make smaller economies offer the US better trade terms: “Trump has exempted many trading partners of the US and given them the possibility of negotiating a deal that gives them an extension of the exemption. Trump wants these trade partners to moderate their exports to the US and stimulate their imports from the US.” Leering’s unusual suggestion was published as a stand-alone story by the Business Insider and got the highest number of engagements on social media.

Apart from that, ING’s commentary has been in line with the rest of the big players. The bank has released a graph with trade war scenarios outlining the transitioning from a cold trade conflict to a global trade war with its wider economic impact and the implications for the financial market. They also have a website section entitled ‘Trading blows’ where analysts publish their thoughts. Leering wrote in one post: “The world is about to enter into a real trade war. In our view, only significant protests among Trump voters or a quick surrender of US trade partners can prevent this. There are few signs this will happen anytime soon.”

Goldman Sachs has taken a more multi-media approach to sharing insights by uploading a video of senior strategist Allison Nathan explaining why the bank’s research team maintains a more moderate stance than observers who think a significant hit to economic growth is inevitable – in Nathan’s view, the US trade actions are “much less severe than Trump’s campaign rhetoric and will likely have a relatively small impact on growth and inflation in the US and elsewhere”.

Business journalists also spread Goldman’s claim that the trade tensions do not present a serious threat to raw materials, and that now is the time to invest in them. Financial new publication MarketWatch, subsidiary of Dow Jones, even called the analysts at Goldman Sachs “surprisingly sanguine, if not upbeat”.

In contrast, Bank of America Merrill Lynch does not share that level of optimism. Its economist Michelle Meyer, who regularly appears on CNBC and Bloomberg and whom Forbes called “a TV personality”, warned that the risks are rising and a “major global trade confrontation would likely push the US and the rest of the world to the brink of a recession”.

Meyer added that tariffs would hurt consumer sentiment and hurt business supply chains by causing disruptions. The bank also surveyed fund managers and found that they view the trade spat as the biggest looming risk to the market.

Like Oxford Economics, Swiss investment bank UBS has also put their comments in a historical context. In a daily audio update, the bank’s chief economist Paul Donovan said that Trump’s tariffs are reminiscent of economic practices from the 19th century: “Back in the 19th century, trade taxes sort of worked. They were net economic negative forces, but companies generally didn’t have much choice about where they made things. Companies were nationally focused and couldn’t move production around the world at will. Tariffs are a 19th century tax.”

The media has also cited an analysis by a team led by the bank’s chief global economist, Arend Kapteyn, showed that trade war escalations could make US stocks drop by more than 20% – a threat that markets have failed to realise, according to the bank.

In accord with Bank of America, Deutsche Bank has also warned about risks of recession, while Morgan Stanley has advised that investors worried about the trade war should concentrate on small caps stock with little international exposure.

The shifting sands of public policy induce seemingly unprecedented dynamics in the markets, and financial institutions have a lot to gain PR-wise if they provide expert opinions on what is happening. The gain is naturally bigger if they manage to reach beyond the specialised business publications and into daily media – to achieve this, they should focus not only on the numeric analysis, but on telling a compelling story about the wider context.

As we noted in another feature, the use of storytelling in the financial services industry is a relatively new marketing approach, but for brands ready to innovate, it has been extremely effective and useful. In this case, some of the companies on our chart have done that, albeit not by employing the consumer-centred narratives which characterise storytelling in marketing. Rather, they have put their numbers in a broad perspective and thus told a story about the bigger picture behind the estimates. PR professionals in the financial sector may want to develop these techniques further in order to reach new audiences and establish their brands as thought leaders.