London Fashion Week A/W 2019: Brands at the Forefront of the Media Catwalk 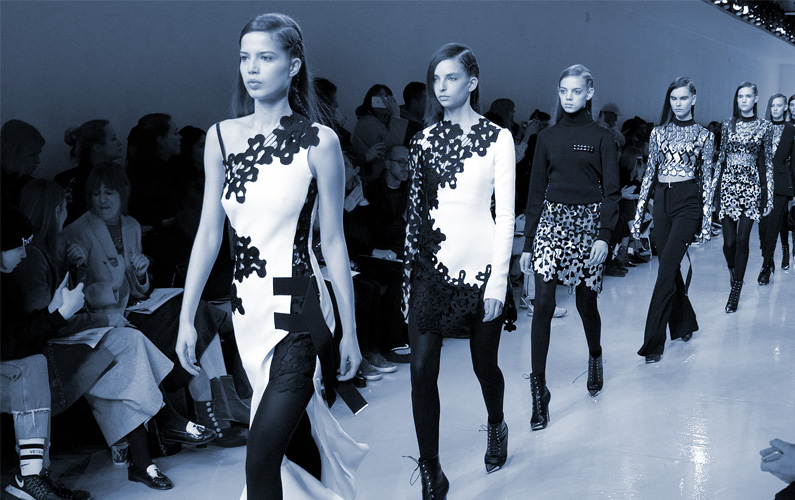 Following New York, London is home to the second of each February’s “Big Four” fashion weeks, with the other two being held in Paris and Milan. This season, some fashionistas thought that the British capital eclipsed the Big Apple, with the show getting fancier than ever and designers presenting one of their strongest and most joyful seasons in recent memory.

In September, London Fashion Week received significant attention internationally because it was the first major fashion week to go fur-free. This decision was taken by the British Fashion Council after surveying the participating designers and came after the news that major fashion houses such as Burberry and Gucci pledged to stop using real fur.

This February’s event also took place under the sign of activism: climate change demonstrators from the environmental social movement Extinction Rebellion organised protests against the impact of the so-called “fast fashion”, attempting to block the roads around the venues. Another protest happened on-stage, as some models stood alongside survivors of the 2017 Grenfell Tower fire in a call for justice for victims of the tragedy.

We analysed the top-tier English-language publications to find the most prominent labels in the media conversation around London Fashion Week.

Victoria Beckham is often in the centre of the discussion whenever she showcases her new designs, especially in her native Britain. This is in part due to her celebrity status: she rose to fame in the 1990s as a member of the pop group Spice Girls and married football star David Beckham in 1998. She launched her eponymous label in 2008 and just four years later, she became the most talked-about designer on Twitter during New York Fashion Week, gaining over 57,000 new followers during the New York shows.

At this February’s London Fashion Week, Beckham was under the media spotlight for bringing back her “naughty side” to the catwalk with leopard prints and body-conscious dresses that highlighted the waist and bottom before falling into soft pleats. Jo Ellison, the Financial Times’ fashion editor, expressed the sentiment shared by many fashion journalists when she wrote that Beckham “delivered her best collection yet”: “It was striking and efficient, clothes for a woman with other things to do.”

She gained her prominence in the conversation not only because of the designs but also because of her A-list family who turned up as guests of honour and “stole the show”. Journalists also noted that her successful fashion career meant she won’t be returning to Spice Girls for their upcoming reunion.

Burberry, on the other hand, owed its centrality in the media discussion due to the online backlash that followed after the brand showcased a hoodie featuring a noose around the neck. Model Liz Kennedy, who said her concerns about the use of a noose were neglected, wrote on Instagram: “Suicide is not fashion. It is beyond me how you could let a look resembling a noose hanging from a neck out on the runway I had asked to speak to someone about it but the only thing I was told to do was to write a letter.”

@burberry @riccardotisci17 Suicide is not fashion. It is not glamorous nor edgy and since this show is dedicated to the youth expressing their voice, here I go. Riccardo Tisci and everyone at Burberry it is beyond me how you could let a look resembling a noose hanging from a neck out on the runway. How could anyone overlook this and think it would be okay to do this especially in a line dedicated to young girls and youth. The impressionable youth. Not to mention the rising suicide rates world wide. Let’s not forget about the horrifying history of lynching either. There are hundreds of ways to tie a rope and they chose to tie it like a noose completely ignoring the fact that it was hanging around a neck. A massive brand like Burberry who is typically considered commercial and classy should not have overlooked such an obvious resemblance. I left my fitting extremely triggered after seeing this look (even though I did not wear it myself). Feeling as though I was right back where I was when I was going through an experience with suicide in my family. Also to add in they briefly hung one from the ceiling (trying to figure out the knot) and were laughing about it in the dressing room. I had asked to speak to someone about it but the only thing I was told to do was to write a letter. I had a brief conversation with someone but all that it entailed was “it’s fashion. Nobody cares about what’s going on in your personal life so just keep it to yourself” well I’m sorry but this is an issue bigger than myself. The issue is not about me being upset, there is a bigger picture here of what fashion turns a blind eye to or does to gain publicity. A look so ignorantly put together and a situation so poorly handled. I am ashamed to have been apart of the show. #burberry. I did not post this to disrespect the designer or the brand but to simply express an issue I feel very passionate about.

The brand apologised and said it has removed the item from its collection. “We are deeply sorry for the distress caused by one of the products that featured in our A/W 2019 runway collection,” Marco Gobbetti, Burberry chief executive officer, said in a statement provided to CNN. “Though the design was inspired by the marine theme that ran throughout the collection, it was insensitive and we made a mistake.”

Most of the articles reporting on the incident also alluded to Gucci’s woollen “balaclava jumper” which was criticized on social media for “resembling blackface”. Gucci also ended up apologising and promising the item would be removed from its collections.

As ever, Vivienne Westwood’s show went beyond fashion: she attracted media attention for using the catwalk to convey political messages. Her models, who included anti-harassment campaigner Rose McGowan and the executive director of Greenpeace UK John Sauven, wore T-shirts with political slogans, carried bags reading “I Heart Crap” and gave speeches on hot social and political issues from Brexit to climate change.

Meanwhile, Chanel and Fendi were mentioned in relation to their former creative director Karl Lagerfeld, whose death was announced during the event, prompting many designers to pay tribute to him.

Burberry’s hoodie dominated the Twitter discussion, with the abundance of negative comments being one of the main reasons for the brand’s decision to remove the item from its collection. As it’s always the case, the use of strong emotional language guaranteed virality. Our findings align with the results of a recent NYU study, which concluded that social media posts receive a 20% boost for every moral and emotional keyword used. For more on this topic, read our analysis of the Gillette ad controversy.

Twitter users wondered how Burberry even let the hoodie go out to production, saying that it’s an unbelievable blunder. Many said that this was actually a marketing strategy and that such designs are showcased for the free “outrage” coverage.

Others connected the fashion item with Black History Month and asserted that the noose is a symbol of racial terrorism. Some users sharing this sentiment thought that “black outrage” is the new trending marketing tactic because such controversies drive clicks and keep the brand in the news.

Black rage is clearly a marketing strategy. I believe Burberry was very intentional. At some point, we have to respond by withholding support and not saying a word about it online. Also, see my previous tweet about high-end Black designers to support. You have options if you want https://t.co/6wU99dikvP

Victoria Beckham shared details of her collection to her 12,8 million Twitter followers, receiving predominantly positive feedback, but her most popular posts featured her family. Vivienne Westwood’s show was also met with mostly positive comments: some users called her participation “groundbreaking”, while others said that more designers and creatives need to be as unapologetic.

Adidas’ presence in the Twitter conversation was boosted by Kendall Jenner tweeting about the brand’s collaboration with emerging female fashion designer Ji Won Choi for a women’s collection unveiled at the event. In the meantime, British label JW Anderson surprised users with its departure from its traditional unisex looks and its swing towards femininity.

As high-profile events like London Fashion Week become increasingly crucial for the relationship between brands and consumers, measuring and analysing both traditional and social media is essential not only for evaluating the impact of recent shows but also for planning and implementing future strategies.