M&A During a Crisis: How Has COVID-19 Affected Dealmaking? 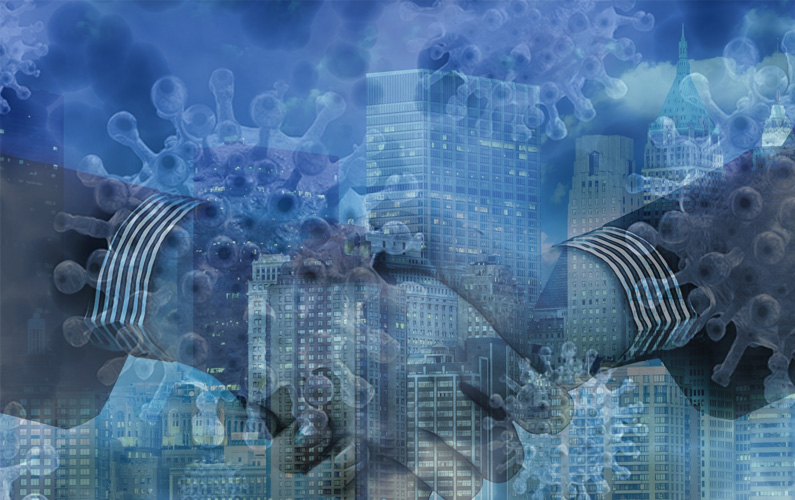 As the coronavirus outbreak continues to disrupt the global economy, most media publications point out that we’re witnessing one of the biggest economic shocks in generations, while many experts believe the world has already entered a recession. In this regard, the pandemic’s impact on financial markets has undoubtedly disrupted dealmaking, at least in the short term.

In the US, the current circumstances even presented an opportunity for some policy-makers on the Democratic front to suggest measures against the increasing market power of large firms – for example, Senator Elizabeth Warren and Congressional representative Alexandria Ocasio-Cortez have drafted the “Pandemic Anti-Monopoly Act”, a sweeping piece of legislation that would prevent transactions greater than $100m during the pandemic.

And while the bill isn’t expected to pass, with some observers estimating that it would shut down more than 80% of M&A transactions, the feeling among the commentariat is that it highlights the tensions of the moment. While M&A deals during the crisis would enable strong companies to help troubled ones, they could also compromise competition and innovation, with concentration among industries already being something to worry about.

Against this backdrop, M&A in North America declined roughly 25% year-over-year in the first quarter, and many expect it to decline by as much as 50% year-over-year in the second quarter. However, it’s interesting to trace the deals that took place or were shelved during the pandemic and the way they were presented by the media.

We decided to use the Commetric COVID-19 Business Impact Tracker to analyse the effects of the COVID-19 crisis on the M&A landscape. Our free tool uses rule-based natural language processing (NLP) and machine learning to track more than 450 types of news-reported business events that affect companies and industries during the pandemic.

We analysed 149,031 articles from 8,015 online media outlets for the period 1 March – 17 May 2020, covering most publicly-traded companies in the US and the UK, and looked into the industries that gained the most traction in the media in the context of the COVID-19 pandemic.

We found that journalists focused on the successful deals in healthcare, technology and telecoms, while analysing what went wrong with the delayed or cancelled ones in sectors like automotive and aircraft.

Healthcare took the lead mostly due to the developments within the pharmaceutical sub-sector. As usual, pharma M&A deals were subject of extensive coverage not only in business and healthcare outlets but also in daily publications, with industry watchers keen to follow company couplings.

By the way, pharma also made healthcare the most innovative sector during the crisis, at least in terms of their media resonance. Particularly prominent was Johnson & Johnson’s development of a new vaccine for the coronavirus, whose trials were reported to start as early as September 2020. Another highly visible healthcare company was the Dutch molecular diagnostics producer Qiagen, which will receive support by the U.S. Department of Health to develop a new test kit to differentiate the novel SARS-CoV-2 coronavirus from 21 other serious respiratory infections.

For more on this topic, read our analysis “COVID-19 Business Impact Tracker: Most Innovative Companies and Industries During COVID-19 Pandemic”.

Household & personal goods came second because of Sony, which was actually the most often mentioned company in the media conversation.

Sony made headlines for its plans to buy full control of its financial services unit, Sony Financial Holdings, and make a wholly-owned subsidiary to weather the crisis. Kenichiro Yoshida, chief executive of the Japanese electronics company, told reporters that the company “will be able to carry out more flexible management” as the company’s name will become Sony Group.

One of the main incentives behind the acquisition is that Sony technology would be useful in financial services, making the company a strong fintech player. Sony‘s healthcare and public safety products performed well during the crisis, but the disruption of its music and movie releases made its profit crash 86% in January-March from a year earlier to 12.6 billion yen ($118 million).

Akio Morita, a co-founder of Sony, emphasised the importance of long-term management: “People’s values are going to change. Everyone in the world is now thinking about what is truly precious to us?” he said. “And that means we continue to grow close to people.”

Meanwhile, Britain’s pharma giant AstraZeneca came second in our sample, as it approached US rival Gilead Sciences about a potential merger which would result in one the world’s largest drug companies – the two combined firms would have a market capitalisation of about $232 billion, which would exceed Merck & Co ($207 billion) and Pfizer ($200 billion).

According to many analysts, the deal would unite the efforts of two of the most notable firms at the forefront of the fight against the virus but could also be tricky as governments seek control over potential vaccines or treatments.

AstraZeneca also dominated the recent conversation around innovation for saying it has the capacity to manufacture one billion doses of the University of Oxford‘s potential COVID-19 vaccine and agreeing to supply Europe with 400 million doses.

For more pharma insights, take a look at our infographic: “Pharma Innovation at Its Highest During Covid-19 Pandemic”.

The other prominent pharma company in our sample – Mylan – was mentioned because its merger with Pfizer’s off-patent branded drug unit, Upjohn, was postponed for the second half of this year due to the pandemic. The restrictions on large gatherings impeded the general meeting of shareholders who needed to approve certain aspects of the deal.

In the meantime, Thermo Fisher, a provisioner of scientific instrumentation and software to the healthcare sector, agreed to buy Dutch diagnostics group Qiagen in an $11.5bn deal, seeking to expand its disease-testing capabilities amid the worsening coronavirus outbreak. Thermo Fisher had been reported to have had an interest in Qiagen even before the pandemic.

The third most prominent company in our research – Nissan – shelved its plans to push towards the full merger with Renault. The companies, which have been hit hard by the pandemic, said they would instead fix the troubled Renault–Nissan–Mitsubishi Alliance in a plan that includes cutting the alliance’s vehicle ranges by a fifth, pooling manufacturing by region and capitalising on joint designs.

Nissan was also in the news for shuttering its Sunderland plant, Britain’s biggest car factory, and the decision to furlough almost 10,000 workers at its US operations.

The automotive industry is facing its worst year in decades, as it struggles to cope with the ramifications of the widespread industrial disruption caused by the coronavirus pandemic. In the US, new car sales declined approximately 35%, but the situation has been far worse in Europe – for instance, new car sales fell 85% in Italy, 72% in France, and 69% in Spain.

Because of social distancing measures, consumers are unable to visit car showrooms, while high-profile events like the Geneva Motor Show, which attracted 602,000 visitors last year, were cancelled. Moreover, consumers are generally reluctant to make big purchases at a time of such financial uncertainty.

For more on this topic, read our analysis: “COVID-19 Business Impact Tracker: The Woes of the Auto Industry”.

Aircraft materials company Hexcel called off its all-stock $6.4 billion merger with Woodward, the world’s oldest and largest manufacturer of control systems for aircraft engines, as travel bans to affected the demand in the aerospace sector. Both firms are Boeing suppliers: the world’s largest commercial aircraft manufacturer is Woodward‘s biggest customer and Hexcel‘s second-biggest customer after Airbus.

In fact, Boeing, which reported a loss of $641 million for the first quarter of 2020, was the most often mentioned company in the discussion around the coronavirus across all industries, as per our COVID-19 Business Impact Tracker.

Boeing gained media traction when it announced many job cuts, mainly in its commercial aeroplanes division, and when former United Nations ambassador Nikki Haley resigned from the Boeing executive board, arguing that she cannot support the direction the board is going towards.

The conversation around other companies was driven by their relationship to Boeing: for example, Spirit AeroSystems stopped production for the planemaker and furloughed workers supporting Boeing programs in Kansas and Oklahoma. Meanwhile, Boeing’s CEO David Calhoun said that it will take years for the aircraft-building business to return to its pre-pandemic levels.

With almost all its airline customers struggling to survive due to travel restrictions and a slump in demand, the aerospace industry has been one of the hardest hit by the coronavirus pandemic.

As global airline revenues are now forecast to drop by more than $314bn in 2020, aerospace companies are facing an unprecedented amount of cancelled contracts and production halts, leading analysts to believe that the sector is experiencing the worst crisis in its history.

For more on this topic, read our analysis: “COVID-19 Business Impact Tracker: Boeing Under the Spotlight as Aerospace Deals with Its Worst Crisis”.

On the telecoms front, Verizon bought the video conferencing platform BlueJeans, which has seen an uptick in usage amid lockdowns and working-from-home policies, alongside platforms like Zoom, Slack and Microsoft Teams.

Verizon also made headlines for donating $2.5 million to small businesses through the nonprofit Local Initiatives Support Corp., bringing LISC’s Verizon Small Business Recovery Fund up to a potential $7.5 million. The donation was the top-trending story in the media debate around the telco industry as a whole.

For more on this topic, read our analysis: “COVID-19 Business Impact Tracker: Verizon’s CSR Activity at the Forefront of the Telco Conversation”.

Within the technology sector, Intel bought mobility app Moovit, which provides information on public transit and transportation options like shared scooters, for $900 million. The acquisition took place three years after Intel acquired Mobileye for $15.3 billion and will help build out Mobileye as a “complete mobility provider”.

According to many analysts, Big Tech got even bigger during the coronavirus pandemic, as millions are confined at home, relying on services such as online retailing or video conferencing.

Tech companies were quick to position themselves as essential not only for coping with life under quarantine but also for battling the virus itself by utilising new software solutions.

The deal didn’t get much media attention as the financial services sector achieved the greatest media resonance in relation to its donations to support various COVID-19 initiatives. For instance, HSBC donated £1 million to the National Emergencies Trust Coronavirus Appeal and British Red Cross in support of vulnerable people, and Wells Fargo announced a $6.25 million donation to support domestic and global response to the coronavirus and to help public health relief efforts.

For more on this topic, read our analysis: “COVID-19 Business Impact Tracker: Financial Services Step up CSR Amid Falling Profits”.

“The research clearly shows the importance of properly resourcing deal teams’ communication efforts,” said Professor Scott Moeller, director of Cass’s M&A Research Centre. “This is especially the case given the proliferation of social media, and the need to be responsive to a much wider range of stakeholders. But it also throws up some surprising findings around the immediate market response to deal announcements. For instance, it appears that equity markets can –in the very short term at least – reward a lack of public information about an M&A transaction.”

Examining communications activity around 198 deals in the UK between 1997 and 2010, the study concluded that proactive announcements matter, since 84% of deals were announced as actual offers are completed, compared with around half of those which were announced in response to a leak.

Moreover, deals involving PR firms have a higher chance of completion, announcements with statements from both companies’ chair/CEO are associated with significantly higher levels of success, and leaked M&A deals, or announcements lacking information about the underlying strategic rationale, are actually rewarded by the markets in the very short term.