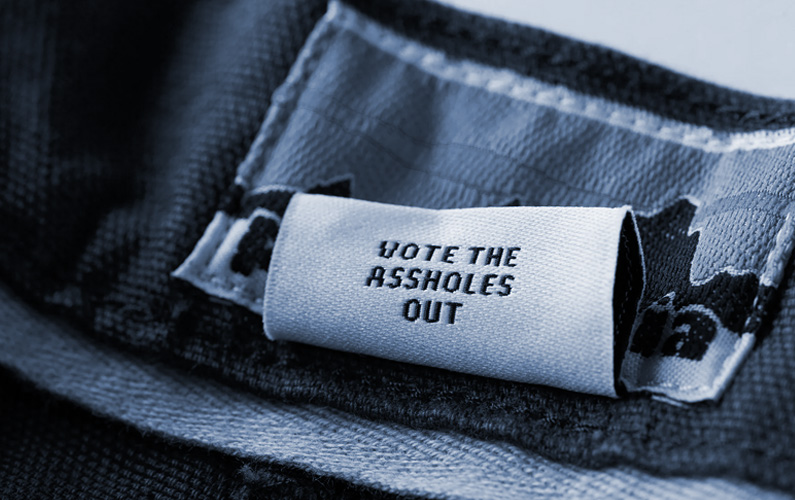 Examining the media conversation around the 2020 US elections, we discovered that one industry has been especially vocal in urging people to vote: fashion.

And during this September’s New York Fashion Week, a group of American designers launched Fashion Our Future 2020, a voter registration initiative with the goal of empowering at least one million first-time voters. The designers reshaped their own e-commerce platforms, encouraging shoppers to not just click “Buy” but also “Register to Vote”.

This is the first US election which sees such kind of political activism coming from fashion brands at a time when they are redefining what fashion means in a world surviving a pandemic. This is an interesting development given that the fashion world has usually stayed away from politics and kept its communications focused on questions of personal identity such as gender and race.

“Vote the assholes out”

Fashion’s unusual support of voting rights was reflected not only in industry publications such as Vogue, ELLE or The Business of Fashion but in many daily outlets as well, including the New York Times, the Guardian and Wall Street Journal.

To find out which brands had the largest share of voice in the media discussion around the US elections, we analysed 1300 articles published in top-tier English-language outlets between 1 July – 15 October 2020.

Outdoor brand Patagonia dominated the conversation after producing shorts with a hidden message — an interior label that read “Vote the assholes out”, where by “assholes” the company means “politicians from any party who deny or disregard the climate crisis and ignore science.” The $79 “regenerative stand-up shorts” went viral and quickly sold out.

A Patagonia spokesperson confirmed on Twitter that this was a legitimate campaign in line with the brand’s historic political and environmental activism. Many media outlets reminded their readers that Patagonia also sued the Trump administration for its decision to shrink the size of two national monuments in Utah.

Patagonia is among the fashion brands that are considering environmental sustainability a management agenda, at a time when words such as “green”, “eco”, “organic”, “slow” and “ethical” are increasingly becoming a part of the fashion conversation. Many labels have started building their business models on sustainable production and operation, making sustainability a major focus for long-term growth.

The industry has been perceived as more self-conscious than others about its dire eco-credentials, with concerns over its unsustainable price tag growing. Critics have focused particularly on fast fashion, which involves increased numbers of new collections and quick turnarounds, encouraging overconsumption and the sale of clothes so cheap they are being treated disposably, contributing to water and air pollution.

Meanwhile, Louis Vuitton opened its show during Paris Fashion Week with a knit sweater that read “Vote”, part of a collection that was “a sensitive zone that erases gender and promises exponential creative possibilities.” Creative director Nicolas Ghesquiére admitted that this is just the beginning of exploring non-binary designs at the famed Parisian house.

Louis Vuitton has been one of the proponents of the gender-neutral movement, together with brands such as Gucci and Kenzo. The Parisian house closed last year’s Paris Fashion Week with a futuristic gender-neutral Spring 2019 collection featuring space and science fiction themes, implying that in the future, gender fluidity would be the new norm.

Both Patagonia and Louis Vuitton are good examples of brands which aligned their support for voting with their overall messaging strategy and brand values centring around issues like climate change and gender parity.

Other labels attracted media interest for forging new partnerships. Nike partnered with Time to Vote, a nonpartisan effort to increase voter participation in US elections, while Gucci joined forces with When We All Vote (WWAV), a non-partisan, non-profit initiative launched by Michelle Obama, which is committed to closing the race and age voting gap and empowering all eligible voters to cast their ballot.

Others used influencers for their campaigns: for instance, Gap, one of America’s largest retailers, organised an election day Instagram concert with pop star JoJo, while Levi’s launched a public information campaign with model and activist Hailey Bieberto to encourage voter participation.

Patagonia‘s bold campaign was also the most viral one on Twitter, as we discovered analysing the social media discussion around the US elections in the last three months.

The first Tweet of the hidden tag, posted by a consumer, has now been liked more than 55,000 times, resulting in much Twitter excitement. Afterwards, Patagonia‘s tweet claiming that the Trump administration is trashing environmental rules that protect our health and slowing the growth of the green economy, garnered 490k reach and 498 retweets.

The brand received much praise by many Twitter users, some of whom asserted that Patagonia is “once again the real deal of corporate America”. Of course, there were also prominent right-wing handles which criticised the campaign – for instance, Breitbart accused the company of being far-left, while @MAGAlways, a popular Trump-supporting account with 45.8K followers, tweeted “Well, I plan on being sure every Democrat DOES get voted out! So yes, we’re going to vote the assholes out!”

Nike‘s campaign elicited similar reactions from right-leaning users, some of whom alleged that the company’s stores were burned down during the Black Lives Matter protests by Biden supporters, “so now they will help register more Biden voter’s to help Biden win!”

Many on the right presupposed that brands which encourage voting actually root for the Democratic candidate – perhaps because value-based fashion campaigns have a history of supporting “left” causes such as LGBTQ+ rights and the Black Lives Matter movement (think of Nike’s viral Colin Kaepernik ad).

But not all criticisms were along partisan lines: for example, some users noted that Louis Vuitton showcasing a “Vote” shirt is particularly amusing considering that the collection won’t be available for months after the election.

There were also users who objected to the very idea of brands taking political stances: for instance, some posted that Nordstrom should stop being political because it’s a retail store.

Those reactions remind us that political engagement inevitably brings risks for brands – the most obvious of which is alienating consumers from opposing camps. However, our analysis showed that most fashion brands did a good job of making their campaigns non-partisan and managed to engage users in discussions about the importance of voting.

As such, the fashion brands we analysed demonstrated that corporate activism doesn’t always have to mean taking sides. Supporting voting rights has proven to be a rather safe issue, regardless of political biases, as it’s very unlikely that the idea of voting would result in a severe backlash.

Moreover, non-engagement brings risks too at a time when consumers, especially millennials and Gen Z-ers, expect brands to take stands, with more and more US shoppers starting to understand their purchasing power not just only in economic terms but also as an enactment of practical ethics.

For fashion houses, corporate activism could bolster their reputation when it authentically aligns with their pre-existing brand values. “What we have found as a company is that when we do the right thing, we sell more,” said JJ Huggins, a spokesman for Patagonia. “It improves our brand image.”

The campaigns we studied provided a good reputational boost for an industry which has an increasingly controversial presence in the media – big fashion brands have faced allegations relating to sexism, racism, harassment, environmental harm, exploitation of workers and so on.

It’s also interesting to note that the brands facing the largest social media crises of late are predominantly from the fashion industry. This could be explained by the supposition that fashion items are often taken to be markers of cultural and social identity, and thus are susceptible to be perceived as controversial across social networks. For instance, fashion often draws inspiration from other cultures’ traditions, which has recently given rise to accusations of “cultural appropriation”.

Many brands have started to push back against these perceptions with massive CSR initiatives. As we discovered using the Commetric COVID-19 Business Impact Tracker, Apparel and Fashion has been the most active CSR sector after Financial Services, at least in terms of their media resonance. It was actually a company from the Apparel and Fashion industry that enjoyed the highest degree of media resonance for its CRS policies during the pandemic: footwear maker Crocs, whose products are often used in medical facilities, made global headlines for giving free shoes to US healthcare workers.

And now it remains to be seen whether political activism would become a more permanent part of fashion’s communications campaigns even after the elections. Having branded themselves as advocates of democracy and civic engagement, it would be interesting to observe how brands will continue to engage with the growing number of belief-driven consumers.