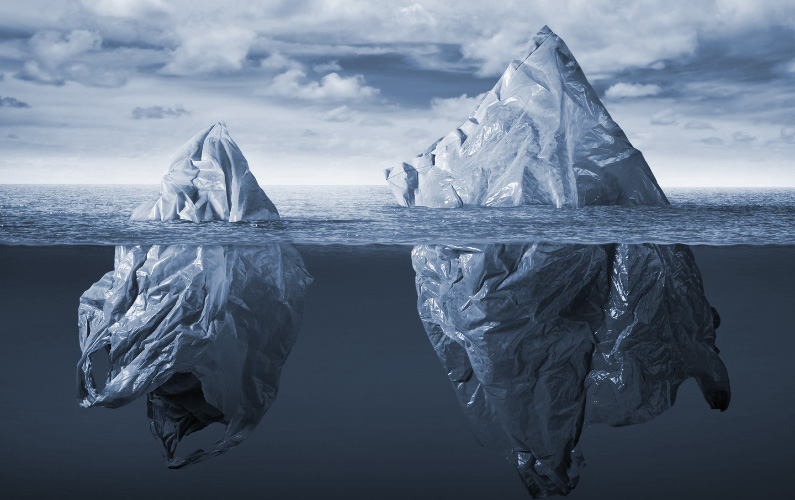 Before the pandemic, the media conversation around plastic pollution was becoming livelier and livelier, fuelling an ever-dynamic discussion on social media, in line with the increasing focus on broader themes such as climate change and sustainability. As public awareness of environmental issues continued to grow, plastic pollution became a major focus of science and public health communications.

However, as with every aspect of our lives, Covid dramatically changed the dynamics of the discussion: plastic waste didn’t seem like such a priority during 2020. The pandemic may have largely shifted media attention onto human rather than environmental issues and onto the well-being of present rather than future generations.

Following the panic of the early lockdowns, consumers stockpiled food, soap and toilet paper into carts, and rather than banning single-use plastics, which major players like Walmart, Target, Kroger and CVS Health pledged to do, retail chains returned plastic bags to all stores, requesting customers to not use reusable ones.

At the start of the pandemic, it seemed that there might be an environmental silver lining: as travelling was banned or discouraged, air quality has seen drastic improvements around the world and carbon emissions were projected to fall.

But that was quickly dismissed as wishful thinking: throughout 2020, consumer behaviour changes resulted in greater consumption of packaging as more people shopped online, bought disposable protective gear like masks and gloves and preferred wrapped products. Consulting firm Wood Mackenzie estimated that US demand for flexible packaging, most of which is single-use plastic, increased by 4% to 5% compared with the year prior.

What a difference a year makes

As the media coverage of the pandemic arguably generated more social panic than any global event since the World Wars, Covid eclipsed the debate around other existential issues. For instance, media attention to climate change dropped dramatically during the early months of the pandemic: a global monitoring project that tracks media coverage of climate change found reporting on this issue down 59% from January to April 2020.

Unsurprisingly, our analysis shows that the media coverage and social media engagement around plastic pollution significantly decreased in 2020, as compared to 2019.

The peaks in plastic pollution stories in May, June, July and October 2019 included many positive reports. Some of the top-trending articles were about seaweed pouches replacing thousands of plastic bottles at the London marathon, milkmen returning as millennials bid to cut plastic waste, plastic straws being replaced by sturdy paper straws and even pasta straws in restaurants, and most nations approving the UN pact on plastic waste.

In contrast, the decreased number of plastic pollution stories during 2020 was definitely with a more doom-and-gloom feel, as journalists told about how Covid derailed the fight against plastic waste and worsened the ocean plastic pollution problem, often using the phrase “plastic pandemic”. Many media outlets also pointed out that unlike most industries during COVID-19, plastic manufacturers are seeing production increase.

Environmental communication during the pandemic seemed largely absent due to one crucial factor: the inability to hold physical protests, which meant that environmental activism became much less visible in mainstream media. In general, climate advocacy groups have built their communication strategies on the physical act of occupying public spaces, conveying a sense of emergency and crisis. Even though social media has enabled grassroots environmental communication to continue, lockdowns diminished the ability of climate advocates to seize and hold the gaze of the mainstream news audience.

But the drop in news coverage of climate and environmental crisis during the pandemic, public concern about climate change has not necessarily declined: a poll conducted in April 2020 found widespread global support for ‘government actions to prioritise climate change in the economic recovery after COVID-19’.

Covid’s impact on plastic pollution thrеw into the background other topics in the media discussion, such as corporate developments or new regulations, as we found analysing 608 English-language articles published in top-tier outlets between October 2020 – February 2021.

Most publications focused on how the coronavirus crisis has sparked a personal protective equipment (PPE) arms race around the world as governments rush to stockpile masks, gloves, visors and gowns. PPE has become an additional threat to the world’s oceans, which have been choking under the weight of plastic at a rapidly increasing rate.

And while PPE production causes a visible plastics problem, another is playing out more quietly: within the topic of Regulation, some restrictions on single-use plastics have been paused or rolled back as authorities focus on the crisis. In the UK, a much-heralded charge on plastic bags has been suspended, a ban on such items has been put on hold in US states such as Maine, while retailers including Starbucks have banned reusable products to protect against the spread of Covid.

But there were some positive news stories within the Regulation topic, as Canada announced plans to ban single-use plastics – checkout bags, straws, stir sticks, six-pack rings, cutlery, and even foodware made from hard-to-recycle plastics – nationwide by the end of 2021. The move is part of a larger effort by the nation to achieve zero plastic waste by 2030.

In the meantime, the Industry efforts topic focused on the plastics lobby finding renewed momentum: the industry is pushing people to use plastic again – in the context of the pandemic as safer – an assumption that, according to many critics, was based on arguments and studies of questionable validity and origin.

For example, the plastics lobby targeted the reusable bags, saying they are only trying to avoid disaster, because reusable bags can end up full of germs, putting the public and retail workers at risk. The industry also sent a letter to the US Department of Health, calling for a public statement on the health and safety benefits of single-use plastic amid the pandemic.

Our findings contrast our analysis of the media debate around plastic in 2019, which showed that most outlets concentrated on the initiatives companies are taking to reduce their plastic waste. The current media focus is perhaps indicative of companies’ deprioritisation of the plastic issue during the pandemic.

Instead, companies were rather implicated in new research findings highlighting the need to address plastics pollution. For example, Amazon‘s plastic pollution came under scrutiny with the publication of a new report by the nonprofit ocean advocacy organization Oceana. The report estimated that Amazon was responsible for 465 million pounds of plastic packaging waste last year.

And Coca-Cola has been named the world’s worst plastic polluter for the third year in a row, followed by fellow non-movers PepsiCo and Nestle. Coca-Cola products – including brands Fanta and Sprite – were by far the most common branded plastic found in an annual audit by environmental group Break Free From Plastic, which collected almost 350,000 pieces of plastic from 55 countries.

The usual suspects, with a few newcomers

Consumer giants like Coca-Cola, PepsiCo, Nestle and Amazon have always been at the centre of the plastic pollution debate, as corroborated by our findings last year.

In our current study, we used Commetric’s proprietary ‘media conversation impact score‘ metric to identify the organisations with the biggest impact on the media discussion around plastic pollution.

Asda was the company with the largest media conversation impact, as it revealed plans to roll out initiatives in-store to ensure that it does not cost more to ditch single-use plastics. In a move to tackle critics who say going green comes at a premium, Asda launched a brand new type of supermarket, partnering with popular household brands including PG Tips, Vimto, Kellogg’s, Radox and Persil to install new equipment at the store so customers can bring their own containers to fill up on items.

But any such corporate effort lagged behind Greenpeace‘s media conversation impact. The organisation took on the plastics lobby, pointing out that just because a material is made from single-use plastic it does not make it less likely to transmit viral infections during use.

Greenpeace also published a study titled “The Making of an Echo Chamber: How the plastic industry exploited anxiety about COVID-19 to attack reusable bags”, in which it claims that the plastics industry has been waging a PR war in an attempt to interfere with legislation banning or regulating the use of single-use plastic, notably around plastic bags: “Through front groups, corporate-funded research, and misrepresentation of scientific studies, the plastics industry has exploited the COVID-19 emergency to create fear about reusable bags and assert that single-use plastic is necessary to keep people safe.”

The organisation also filed a lawsuit against Walmart alleging the company is using “unlawful, unfair, and deceptive” practices regarding the recyclability of packaging on its private-label plastic products. It also claimed the retailer has violated state consumer protection laws, including regulations of deceptive environmental marketing claims.

But among these usual organisations, there were also a few names from the oil and gas industry which are not typically found in the plastic debate. Shell, Chevron and ExxonMobil, alongside chemicals firms like BASF and LG Chem, featured in the discussion as the industry plans to spend around $400 billion over the next five years on plants to make raw materials for virgin plastic because, as a growing fleet of electric vehicles and improved engine efficiency reduce fuel demand, the industry hopes rising demand for new plastic can assure future growth in demand for oil and gas.

And although most of these companies say they share concerns about plastic waste, most of them were not covered with a positive sentiment, as their investments in anti-pollution efforts are a fraction of those going into making new plastic, according to a Reuters analysis.

What does this mean for climate communications?

Naturally, the pandemic and the issue of plastic pollution have different places and roles in the mass media’s agenda, with the former shifting the focus from the latter. While this doesn’t mean that climate communicators should stop their efforts, research shows that there are pitfalls in communicating during a crisis like this.

For example, conveying messages about environmental issues at such a time can add to a sense that environmental campaigners are self-satisfied and insensitive to the needs of people who are suffering. Talking about plastic bags while people are dying, losing their jobs or being trapped in their houses can backfire and harm the environmental cause.

But the evidence also suggests that there could also be a “window of engagement“, as people might reflect on wider issues. In research commissioned by European Climate Foundation, the charity group Climate Outreach said that “Covid-19 can feel like a sped up analogy for climate change’ because ‘Both are major health challenges, presenting a global threat to wellbeing in which the vulnerable are hit first and hardest, and personal and local action play a crucial role”.

In this regard, we identified three Covid-related developments which might help environmental communications: