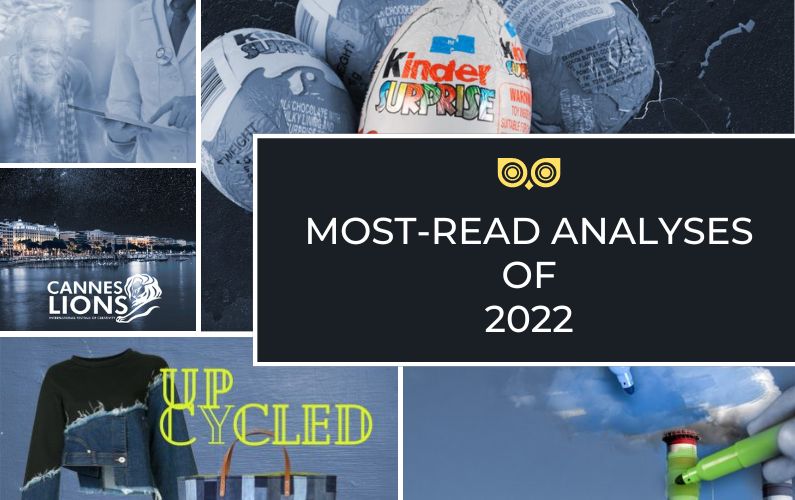 Just like 2020 and 2021 were dominated by Covid-related news, so was 2022 also shaped by a large singular narrative – the war in Ukraine.

But the war and its ramifications made ever-pressing topics like sustainability and equity more pertinent than ever, as evidenced by Commetric’s top 2022 media analyses by number of readers:

1. Upcycling: How Can the New Trend Be Used in Sustainability Comms?

If you work in PR and comms, hardly a day goes by when you don’t hear anything about sustainability – in fact, you may have heard the word “sustainability” so much that you might think that term is at risk of becoming so overused that it soon wouldn’t mean much to consumers. This overuse makes it difficult to gauge which new trends within the sustainability conversation are more than just fads and really tap into consumer perceptions of value.

However, there’s a new concept that seems here to stay: upcycling – reusing existing materials without producing new ones. Upcycling has become an emerging trend among consumers who want to draw attention to the problems of overproduction and overconsumption.

Analysing 2,743 English-language articles published in top-tier outlets between March 2020 – March 2022, we found that Fashion was the most often referred-to industry in the upcycling debate:

Our analysis suggests that PR pros can use the emerging upcycling trend as an ESG differentiation strategy in all the media noise around sustainability while focusing on a “climate plus” model.

Among everything else, media headlines during the pandemic have highlighted the disproportionate effect of COVID-19 across certain racial and ethnic groups. Data from the Centers for Disease Control and Prevention (CDC) showed disparities in everything from testing and vaccination rates to cases, hospitalisations and deaths.

Outside of the COVID-19 narrative, many news stories also highlighted other topics such as maternal health equity, as Black women living in rural counties were reported to be much more at risk of pregnancy-related deaths, and life expectancy and chronic health equity, as the diabetes age-adjusted mortality rate has been much higher among Black people and American Indian/Alaska Natives than White people.

To find out which companies stood out in the health equity media conversation, we analysed 547 articles published in top-tier outlets between September 2020- September 2021. We found that Pfizer, Johnson & Johnson, Moderna and Novartis led the way by media influence score calculated in terms of coverage by high-profile media outlets.

3. What Crisis Comms Lessons Can We Learn from Ferrero’s Kinder Recall? A Media Analysis

Our analysis suggested that crisis comms post-recall should activate the right spokespeople and maintain consumer trust to reinforce your reputation while working on a reintroduction plan and keeping an eye on the competition.

4. Greenwashing: How Can PR and Comms Clean Up Their ESG Messaging?

The role of PR firms and ad agencies in greenwashing has come under intense scrutiny, with communications firms accused of obstructing climate action by spreading disinformation on behalf of their clients. For instance, a peer-reviewed study published late last year in the journal Climatic Change was the first to comprehensively document the role that PR firms have played in helping the world’s most profitable oil and gas companies improve their environmental image and block climate action. The widely-publicised study showed that energy giants have relied on PR firms and ad agencies to finesse their public messaging for more than three decades.

So, as increased public awareness of environmental issues in key markets drives companies to make bolder claims around their green credentials, organisations from a range of industries have found themselves in hot water over attempts to capture the environmental mood. Given the serious and escalating risk posed by anti-greenwashing campaigns, it is vital that PR and comms pros stand ready to steer their ship away from any greenwashing icebergs.

Our analysis suggests that PR and comms could avoid greenwashing accusations by owning their shortcomings instead of masking them, while promoting sustainable lifestyles in general, not just when it comes to their products and services.

5. Cannes Lions 2022: Which Trends Got the Industry Talking?

The Cannes Lions International Festival of Creativity returned after a two-year hiatus due to the COVID-19 pandemic. According to many media reports, the concerns about the world economy and the war in Ukraine didn’t stop marketers, ad sellers and advertising-technology companies from hosting the festival’s usual lavish parties on land and on yachts, hiring big-name entertainers to perform.

The award ceremony was well-documented by specialised media outlets and business publications, which tried to discern the underlying trends shaping the sector’s future. To see what stood out this year, we analysed 228 English-language articles published since the start of the festival.

The recession was something of an elephant in the room. In fact, it was the most prominent topic in the media debate:

The key takeaways from our media analysis were that marketers will need to adapt to a new economic landscape, sustainability becomes top-of-mind in a broader sense and brand creativity and effectiveness get more practical.