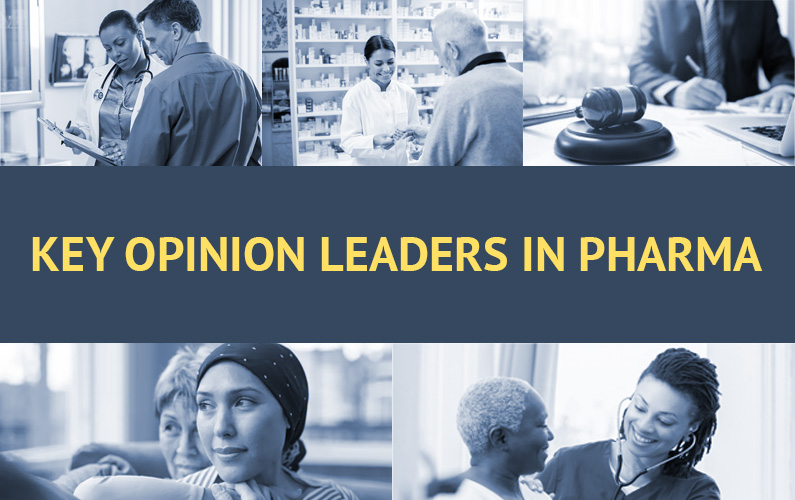 Key opinion leaders (KOLs) undoubtedly play a very important role in the life sciences industry. Pharma companies typically engage them during the later stages of clinical trials and during drug commercialisation. However, in the context of ever-rising regulatory approval challenges, many pharmaceutical companies are seeking deeper collaboration with opinion leaders throughout the drug development cycle.

KOLs, also referred to as thought leaders,  are a key lever in pharma marketing and communications strategy, helping pharmaceutical companies  develop their products through clinical and pre-clinical trials and raise the awareness  and the preference of healthcare professionals (HCPs), health authorities, patient advocacy groups (PAGs), and individual patients, for their marketed brands. Strictly speaking, KOLs are typically healthcare professionals (HCPs) who have a recognized expertise in a specific field (e.g. oncology, endocrinology, epidemiology, etc.), and tend to have an asymmetric influence on the opinion and medical practice of their peers, as a result of which they play a pivotal role in all phases of drug development and adoption (see figure1).

However, from a communications management standpoint, other pharma stakeholders, such as politicians, health authority reps, members of patient advocacy groups, journalists, or academics, who have contributed significantly to or have advanced knowledge in specific therapeutic areas, are also considered KOLs 9 (see Figure 2). In many markets, there has been a shift of power and influence from traditional KOLs in the face of healthcare professionals to payers and patient advocacy groups. 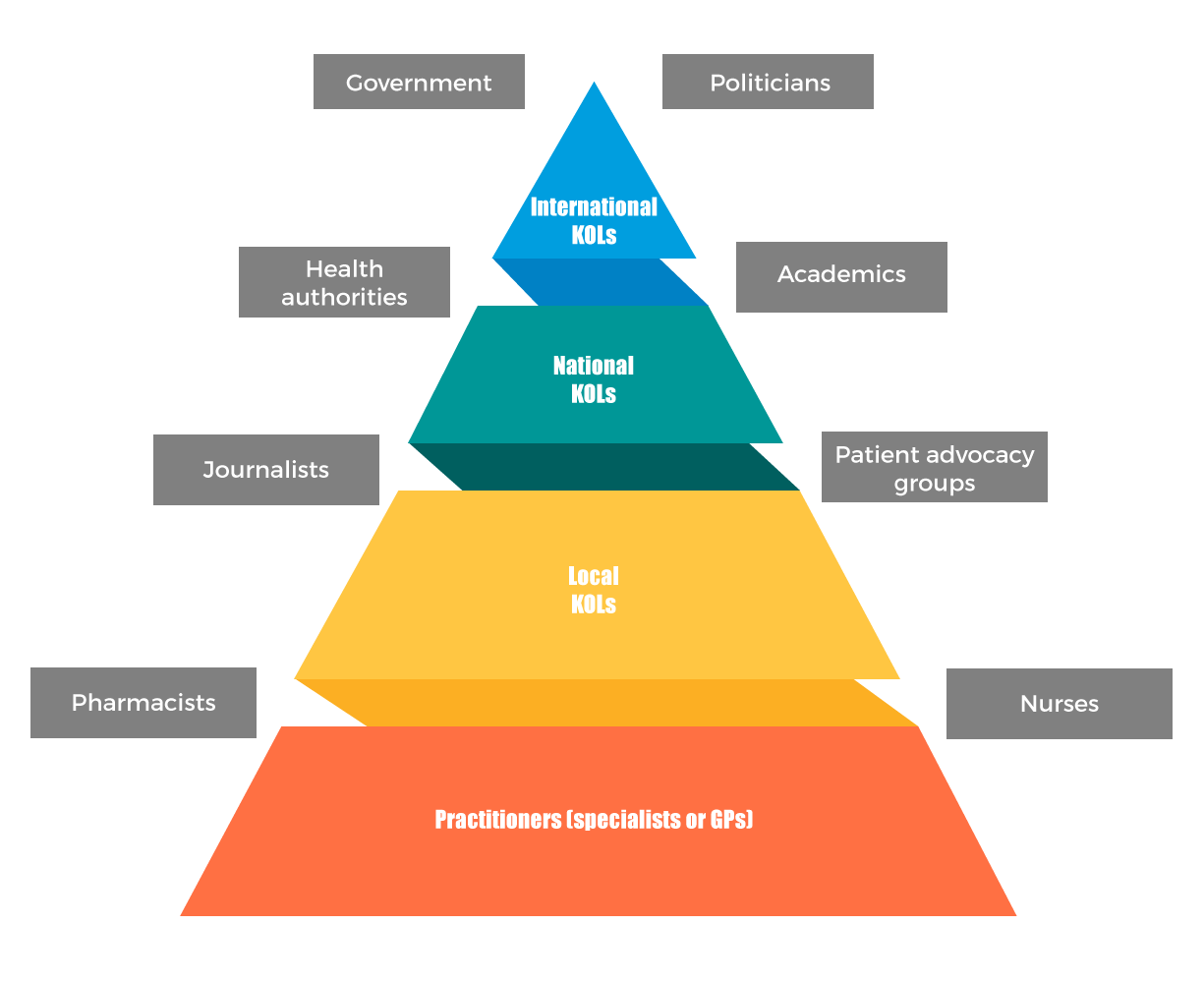 Identifying KOLs in pharma most often relies on traditional methods like literature searches and surveys, whose limitations outweigh their advantages by far.

Both survey methods and literature searches are constrained to identify only two types of opinion leaders:  clinicians who are experts in the therapeutic area by virtue of their publications in top-ranked journals and their membership of editorial boards and clinical trials, and the “market leaders” who are typically large practitioners who are closely connected to the local physician population and gain recognition by the satisfaction and loyalty of their patients.

The changing pharma stakeholder landscape, though, requires a much more rigorous approach to identifying KOLs not only from the medical and academic communities but also from health authorities, media, patient authority groups, etc. This would go on to say that pharma companies should adopt a market-driven approach to KOL identification that is in line with the fundamental change in decision-makers in many national markets, which are in different states with regards to stakeholder influence.

For example, as evident from Figure 3, in the US, Canada, UK, France, and Germany, national and local payers are eclipsing HCPs. Patient groups, on the other hand, are increasing their influence in most countries so tailoring influencer strategies to local markets is essential to success. 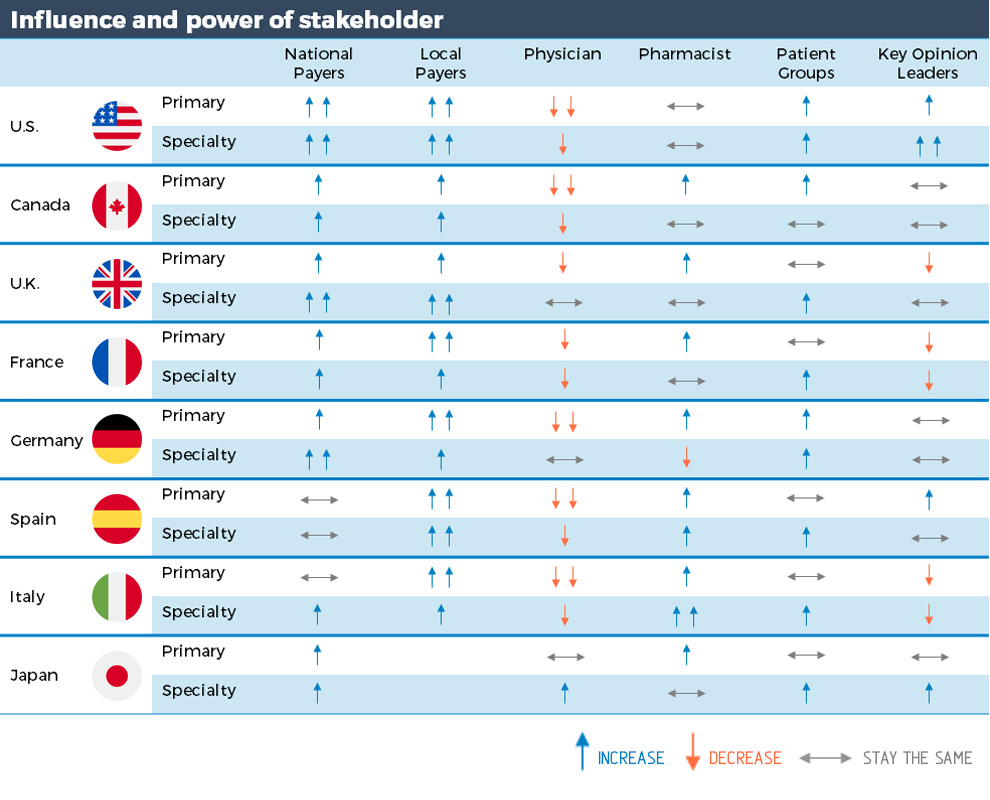 Unlike many automated tools for influencer identification, Commetric’s Influencer Network Analysis identifies influencers in the context of a topic or theme, rather than for a particular company or predefined group of companies or brands. Commetric’s approach combines sophisticated natural language processing and dynamic network mapping technology with human analyst data enrichment to arrive at highly actionable and structured intelligence, which enables clients to take specific action to move the media debate forward in an efficient way.

By ranking influencers within a specific debate and characterizing them by type, INA allows stakeholder outreach programmes to be executed with greater precision and efficiency, targeted to the right people, using the right channels and the right messaging.

Many influencer marketing platforms use algorithms which purport to identify most “influential” commentators on a topic. The main problem with automated platforms is that they take a PR view of influence and reduce its measurement to the simple fact of being potentially listened to, or having an audience, i.e. they ignore the context of the discussions or mentions and often struggle to distinguish the sheer volume of production, or the size of a potential audience, from the actual degree of influence relating to a conversation on a specific topic – something which INA achieves through the combination of technology and human expertise.

Another group of influencer marketing solutions offer journalist/blogger databases, which typically associate influencers with a pre-defined list of “beats” or topic categories. While this approach is useful for general media relations, it does not allow for targeted stakeholder outreach and messaging to be carried out with the required precision and efficiency. In this regard, Commetric INA allows for a deep-dive into complicated and multilayered topics, such as confidence in specific therapies, or specific medical conditions, which typically do not figure in “beat” lists.

A large pharma company wants to leverage KOLs to develop a novel drug for Alzheimer’s. The company hopes that the identified KOLs will contribute toward the entire drug development process – from predevelopment to post-approval feedback analysis.

Identifying the most prominent KOLs in the given therapeutic area is a huge challenge. While prior research work and contributions to publications are important criteria, the pharma company is well aware of the fact that the quality of contribution is more important than quantity when it comes to research. Another issue is the overwhelming quantity of scientific information in the literature, which is almost impossible to be processed manually for the purposes of identifying opinion leaders.  Last but not least, apart from analysing prior research and trials, other important topics that need to be taken into account when developing influencer outreach strategies for new drug development are regulatory approvals and funding, which do not usually feature in scientific journals or publication databases.

The media play an important role in making new scientific information accessible to medical practitioners as well as to the general public. Thus, respected traditional media such as the New York Times, Wall Street Journal, and Washington Post, as well as specialized publications, play a central role in disseminating important scientific information even among scientists.

Using a sophisticated search string we created a sample of 1,850 articles from online media sources that cover news and research on Alzheimer’s disease and treated the whole sample as one big “media discussion”. Then we employed Commetric’s patented INA methodology to dissect the discussion into all named entities it features- people, organisations, brands, reporters, publications, etc. Each entity was screened for relevancy and manually enriched by trained analysts for influencer type, role, and topic, to arrive at a visual representation of the influencers and topics driving coverage around Alzheimer ’s and generating traction with media outlets and reporters.

The rationale behind this approach is rooted in communication studies and the two-step flow of influence model, which is found by research to be a valid representation of the way information, ideas, and opinions, diffuse in social networks, both offline and online.

There are different ways in which information diffuses in the pharmaceutical industry networks. One way in which information is disseminated in the network is when new information about drugs or therapies is released in the healthcare community. These could be new drug launches (or lately drug withdrawals), new drug efficacy or comparison studies, new therapy or treatment guidelines, etc. The new information creates uncertainty about the efficiency of these therapies, wherein an opinion leader steps in to answer the questions raised by the healthcare community.

The information is disseminated through meetings and conferences by the key opinion leaders as a first step, and then through mainstream or professional media outlets as a second step.

Do you want to learn more about identifying key opinion leaders through Influencer Network Analysis?

Download the 12- page white paper by Commetric and learn how Influencer Network Analysis can be used to identify and rank the KOLs that drive media coverage on Alzheimer’s disease, and the related topics that generate traction with media outlets and reporters. 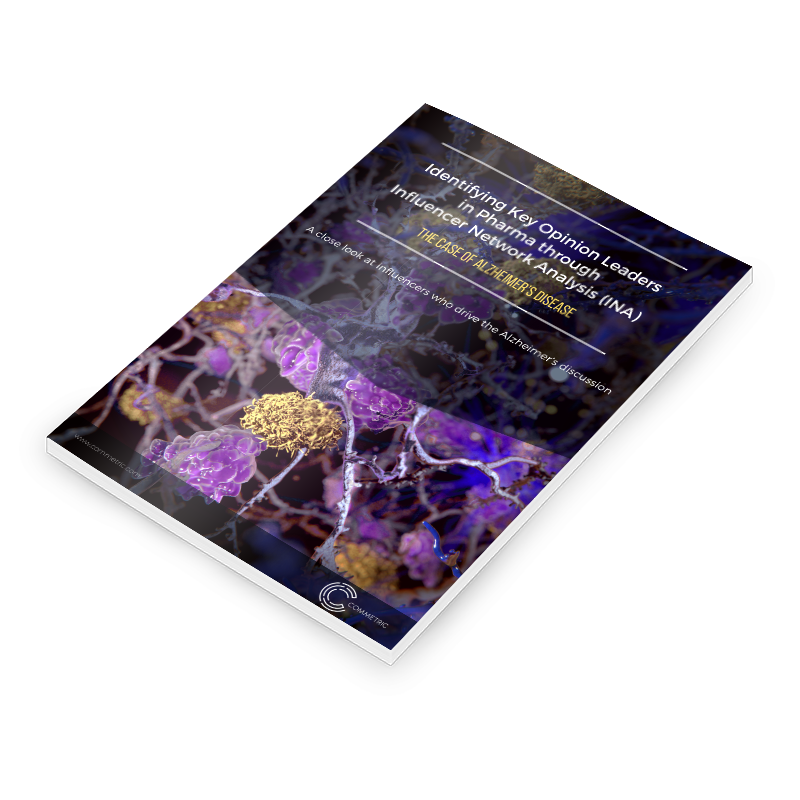